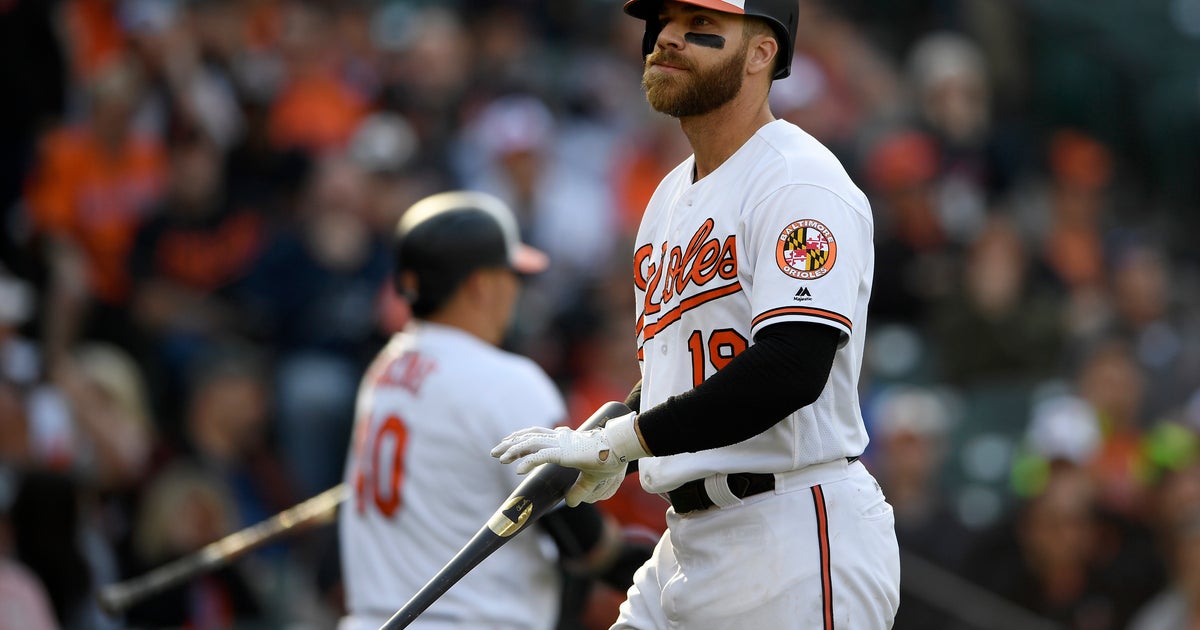 BALTIMORE (AP) — The new regime of the Baltimore Orioles inherited a costly problem in slumping slugger Chris Davis, who’s working with a $161 million contract yet can’t buy a hit.

After batting .168 last year — the lowest average by a qualifier in major league history — Davis opened this season going 0 for 17 with 11 strikeouts. Combined with an 0-for-21 finish in 2018, he’s looking for his first hit since Sept. 14.

Orioles fans have run out of patience waiting for Davis to get into a groove. Many in the sellout crowd at Thursday’s home opener booed him during each at-bat, then cheered when he was lifted for a pinch-hitter in the eighth inning.

Although the 33-year-old Davis doesn’t really fit in with the youth movement being overseen by first-year general manager Mike Elias and rookie manager Brandon Hyde, the Orioles can’t afford to cut him loose. Not yet, anyway.

Davis still has four years left on the massive deal he signed in January 2016, so the Orioles are holding out hope the two-time major league home run champ will ultimately return to form.

Davis wasn’t in the starting lineup Saturday night against Yankees southpaw J.A. Happ, for good reason. Davis, a left-handed batter, is 4 for 27 lifetime against Happ with 12 strikeouts.

There once was a time when Davis was prolific at the plate regardless who was pitching. He hit .270 with 33 homers in 2012 and backed that up the following season by batting .286 with a league-leading 53 homers and 138 RBIs.

Two years later, after he slammed 47 homers and drove in 117 runs, Davis got the biggest contract in franchise history. Since then, his home run total dropped each season.

“My main goal going into spring training was really to turn the page and just focus on what lied ahead and try to forget about what had happened last year,” Davis said. “It’s been tougher to start the season, but there’s a lot of baseball left to play. I’d be foolish if I just started wallowing in my own self-pity and feeling sorry for myself. I don’t think anybody’s feeling sorry for me right now.”

Yankees manager Aaron Boone has been there.

“If you play this game long enough, it punches you in the mouth at some point,” said Boone, a former big league infielder. “I was hitting .151 on June 3 (in 2005), playing every single day my first year in Cleveland after I missed 2004. It’s hard to live through. But it’s also part of the game. You’ve got to find a way.”

Boone rallied to finish at .243 that year, and remains wary of pitching to Davis.

“Obviously, it’s been a tough stretch for him. But I look at it as, he’s a dangerous hitter and we’ve still got to make pitches against him,” the manager said.

On opening day at Camden Yards, Orioles fans showed they were unwilling to endure another season waiting for Davis to turn it around.

“It’s not something that I was really expecting. It was tough,” Davis acknowledged. “At the same time, I heard it a lot last year, and rightfully so.”

Until his performance at the plate begins to improve, there will likely be boos from the hometown fans.

“To feel that in front of your home fans, I mean, I can’t even imagine. I do feel for him,” starting pitcher Alex Cobb said.

Last June, then-manager Buck Showalter put Davis on a mandated hiatus to work on his hitting. It didn’t work.

The plan now, apparently, is to use Davis sporadically and hope something clicks.

“I’m going to support him, and I’m not going to stop supporting him,” Hyde said. “He’s one of 25 guys I’m going to be positive with. I want to believe he’s going to turn it around.”

“I would expect my manager to be behind me no matter who it was,” Davis said. “Obviously, I’m going to be here for the foreseeable future and I’m a guy that’s been here for a while. So I know Brandon is behind me, I know the whole coaching staff, I know my teammates are behind me. At the end of the day that’s all that really matters.”