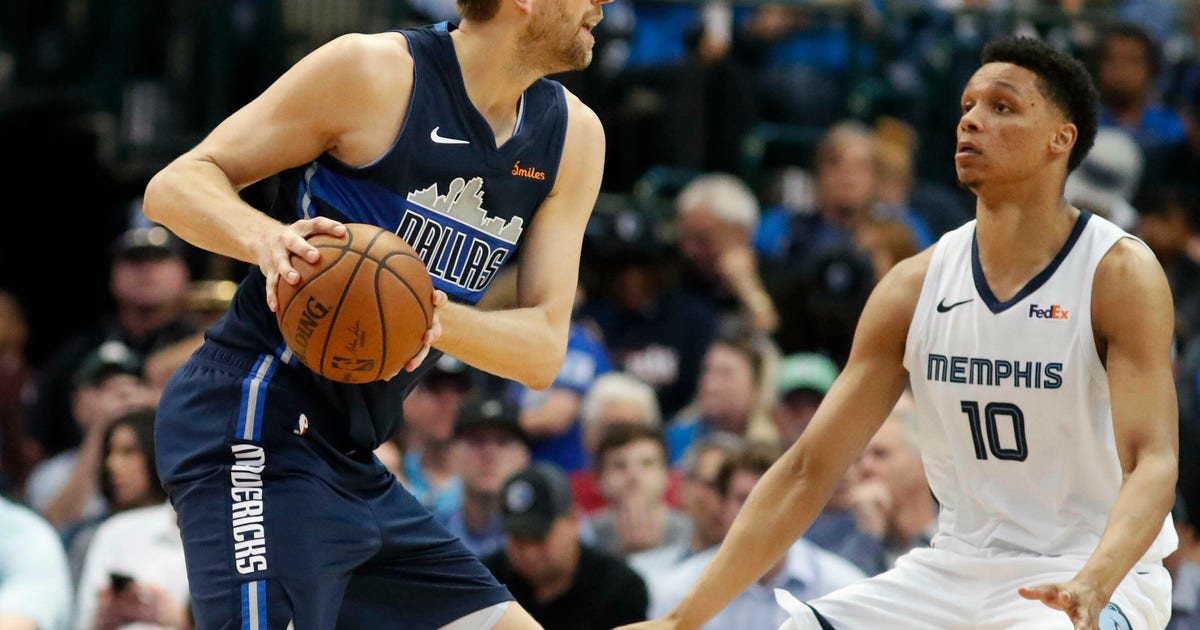 DALLAS (AP) — Delon Wright set career highs with 26 points and 14 assists in his first triple-double after Dirk Nowitzki’s first dunk of the season opened the scoring in what could be his second-to-last home game for Dallas, and the Memphis Grizzlies beat the Mavericks 122-112 on Friday night.

Nowitzki, playing a record 21st season with the same franchise, took a pick-and-roll pass from seldom-used guard Courtney Lee with rookie sensation Luka Doncic resting a sore thigh and dunked with two hands, hanging on the rim for emphasis.

The 40-year-old sent the Dallas bench into a frenzy. Among those celebrating in street clothes — putting his hands to his head with his mouth open — was young Euro star Kristaps Porzingis, who grew up watching the 7-foot German and has said he’d love to play with Nowitzki next season.

The Mavericks acquired Porzingis in a blockbuster deal with the Knicks, but chose not to play the 7-3 Latvian as he continues to recover from a torn knee ligament sustained with the Knicks last season.

Nowitzki hasn’t said he will retire, but the team has big plans for the final home game of the season Tuesday against Phoenix.

Road games have had the feel of a farewell tour, and Dallas County commissioners recently declared April the “month of Dirk” while commemorating the 14-time All-Star passing Wilt Chamberlain for sixth on the career scoring list.

Nowitzki left to a standing ovation in the fourth quarter, finishing with 12 points and seven defensive rebounds. He needs one defensive rebound to become the fifth NBA player with 10,000 for his career.

Justin Holiday scored 20 points on his 30th birthday as Memphis won again after blowing out the Mavericks by 30 on their home court in early March. The Grizzlies will go for a four-game season sweep Sunday at home. The teams came in with matching 31-47 records.

Grizzlies: Wright had 10 rebounds. His previous scoring high was 25 twice, most recently March 5 against Portland. … Chandler Parsons, who spent two seasons in Dallas and still gets booed by Mavericks fans after signing with the Grizzlies as a free agent three years ago, scored 11 points. … C Tyler Zeller scored 10 points after signing for the rest of the season earlier in the day.

Mavericks: Lee led Dallas with 21 points, and Justin Jackson added 19. … Nowitzki led the Mavericks with his seven rebounds, and Lee had a team-high seven assists.