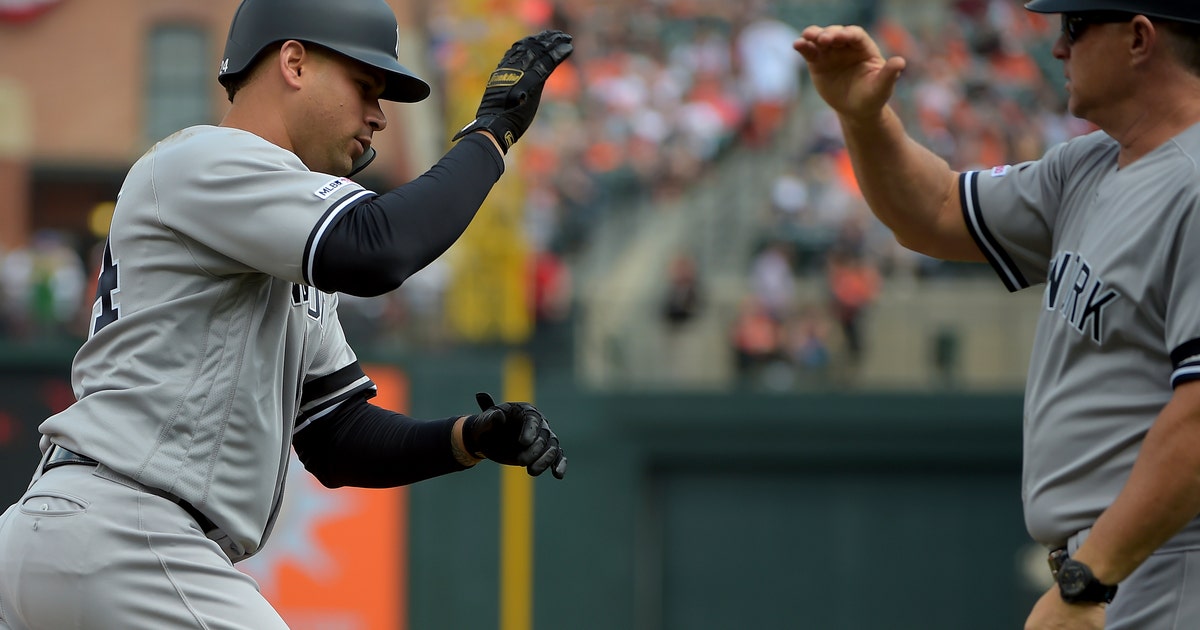 BALTIMORE (AP) — Gary Sánchez hit three of the Yankees‘ seven home runs, their most on the road in more than a half-century, and New York routed the Baltimore Orioles 15-3 Sunday to complete a three-game sweep.

Clint Frazier homered twice and had four hits, a day after hitting a go-ahead three-run drive for his first big league homer since July 28, 2017. Austin Romine and Gleyber Torres also went deep for the Yankees, who got back to .500 at 4-4.

New York’s first 18 runs of the series scored on homers, and the Yankees hit 14 over the three games, a record in a three-game series at Baltimore. New York had not hit seven homers on the road since May 30, 1961, at Boston, when Mickey Mantle, Roger Maris and Moose Skowron hit two each, and Yogi Berra had one.

New York has won eight straight games at Camden Yards, its longest winning streak against the Orioles on the road.

He set a career-best for homers, hitting two-run drives in the third off David Hess (1-1), in the seventh against Mike Wright and the eighth off Dan Straily, who made his Orioles debut. The 26-year-old Sánchez, who saw just nine pitches, has six homers this season and 11 multihomer games in his short career, the most for a big leaguer in his first 274 games.

Frazier, who missed most of last season after sustaining a concussion in spring training, set a career best for hits. His RBI single in the sixth drove in the Yankees’ first run of the series that did not score on a homer.

Domingo German (2-0) retired his first 13 batters before Rio Ruiz walked in the fifth and did not allow a hit until Hanser Alberto singled with one out in the sixth. German allowed his first two batters to reach in the seventh, then was replaced. He gave up two runs, one hit and two walks, down from five walks in his first start, when he allowed one hit over five innings against Detroit.

Straily, signed Friday, allowed five runs and five hits over 1 1/3 innings. He was released by Miami late in spring training.

Alberto, an infielder, became the 10th Orioles position player to pitch. He allowed two runs, one hit and a pair of walks in the ninth.

Baltimore’s Chris Davis was 0 for 4 with two strikeouts. He is 0 for 23 with 13 strikeouts this season and is hitless in 44 at-bats since Sept. 14. Los Angeles Dodgers infielder Eugenio Vélez went hitless in his final 46 at-bats of the 2011 season.

Yankees: LHP CC Sabathia made his fourth and final minor league start Sunday for Class A Tampa, allowing a run and one hit with six strikeouts over 4 2/3 innings and throwing 63 pitches. Sabathia told reporters after the game that he feels better physically since he had a stent inserted into his heart in December because of the blockage of an artery. He is likely to make his first start of the season for the Yankees against the Chicago White Sox on Saturday.

Yankees: RHP Masahiro Tanaka (1-0, 1.46) starts the series opener Monday in Houston. Tanaka is 0-2 with an 8.87 ERA in five appearances against the Astros.