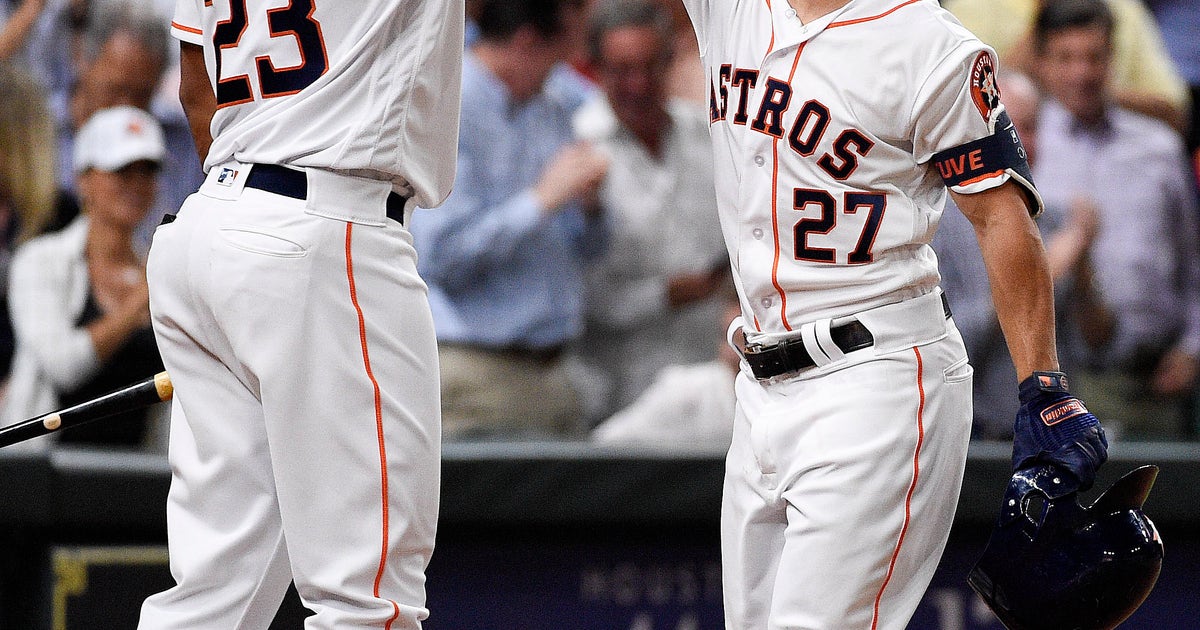 Houston has won five in a row overall to improve to 7-5.

The Astros trailed by one when Alex Bregman doubled off Jonathan Holder with two outs in the seventh inning and scored on a double by Michael Brantley that tied it at 3. Chad Green (0-2) retired Carlos Correa to end the inning.

But the Astros, who rallied to beat Oakland on Sunday and New York in Monday’s series opener, got a single from Yuli Gurriel with no outs in the eighth before back-to-back walks to Robinson Chirinos and Tony Kemp loaded the bases with one out.

Springer then sent a ball down the third base line and into the left field corner, scoring Gurriel and Chirinos to make it 5-3. Kemp would have scored on the play, too, but he tripped and fell coming around third base and had to return to the bag with a dive to narrowly avoid a tag.

It didn’t matter much though as Kemp scored on a sacrifice fly by Altuve to push the lead to 6-3.

Gerrit Cole, who lost his first two starts this season, remained winless after being lifted with the game tied after allowing four hits and three runs in seven innings. Hector Rondon (1-0) struck out two in a 1-2-3 eighth for the win and Roberto Osuna fanned one in a perfect ninth for his fourth save.

The Yankees led early after Luke Voit sent the first pitch he saw into center field for a solo homer with two outs in the first.

A sacrifice fly by Gurriel tied it in the second.

The Yankees had runners on first and second with no outs in the third when Brett Gardner dropped down a bunt that barely made it out of the batter’s box. Apparently thinking it was foul, Gardner stopped after just a few steps toward first base and the Astros turned a double play.

There was one out in the third when Altuve’s homer, which bounced off the wall above left field, put Houston up 2-1. It came after he hit one off the train tracks above left field on Monday night.

There were two on and one out in the sixth when Gary Sanchez hit a sharp liner for a double that bounced low on the wall in left field and darted away from Kemp to score two runs and put New York up 3-2.

Yankees: Ace right-hander Luis Severino has a Grade 2 lat strain and will stop throwing for six weeks. Severino has been out since he was scratched from what would have been his first spring training appearance in early March with right shoulder inflammation. He returned to New York for tests when he wasn’t feeling great, and the new injury was diagnosed on Tuesday. … 3B Miguel Andujar (right shoulder) is scheduled to play catch Wednesday for the first time since he was injured. “Hopefully it’s a big step for him because that potentially tells us a lot in how he’s able to respond to that,” manager Aaron Boone said. … Boone said OF Giancarlo Stanton (left biceps strain) is feeling better and could hit off a tee Wednesday or Friday.

Astros: Bregman left in the eighth after pulling up while running to second base. The team did not immediately provide an update on his condition.

Yankees: LHP James Paxton (1-1, 4.09 ERA) starts the series finale Wednesday night. Paxton got his first win with the Yankees in his last outing when he allowed eight hits and four runs while striking out nine in 5 1/3 innings against Baltimore.

Astros: RHP Collin McHugh (1-1, 2.45) got the win in his last start against Oakland when he allowed three hits and one run in six innings.