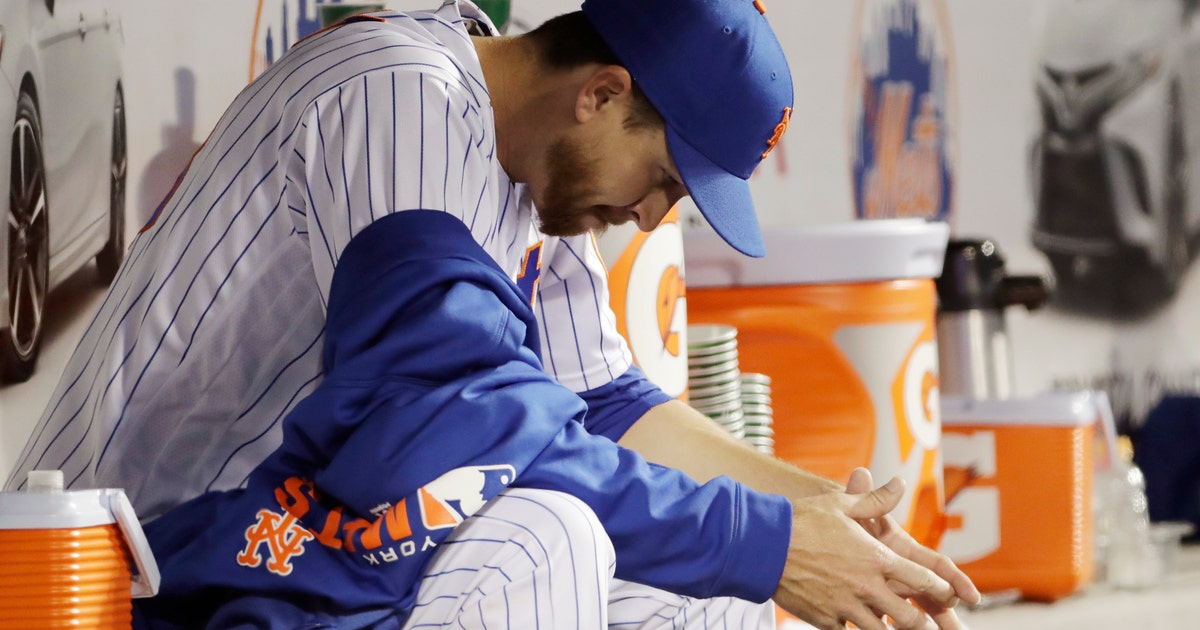 NEW YORK (AP) — Jacob deGrom’s record-tying streak of quality starts ended at 26 when he allowed two home runs to Mitch Garver and one to Eddie Rosario in a 14-8 drubbing by the Minnesota Twins on Tuesday night, the worst outing in two years for the New York Mets ace.

Minnesota had six homers, including a pair by Jonathan Schoop. The Mets hit four of their own, two by rookie Pete Alonso, as the teams combined for the most home runs in a game at Citi Field, which opened a decade ago.

DeGrom gave up three homers and was lifted for a pinch hitter in the fourth inning after allowing six runs and eight hits. He sat grimly on the bench, head bowed, hands clenched together.

The right-hander struck out a career-high 14 during seven shutout innings against Miami last Wednesday, when he matched Bob Gibson’s mark for consecutive starts of six or more innings with three earned runs or fewer allowed, set from 1967-68.

New York held back deGrom’s start for 25 minutes, not wanting a brief April shower to fall on the reigning NL Cy Young Award winner. Home runs then rained from the Twins, who entered with seven in their first nine games.

Garver homered leading off the second, ending deGrom’s scoreless streak at 27 innings. After deGrom threw a run-scoring wild pitch that put Minnesota ahead, Rosario and Garver hit back-to-back long balls in a four-run third for a 5-1 lead.

DeGrom had gone a big league-record 31 starts in a row allowing three runs or fewer since April 10 last year against Miami. He had not given up back-to-back homers since the Los Angeles Dodgers’ Yasiel Puig and Hanley Ramírez connected on May 21, 2014. Mark Teixeira and Giancarlo Stanton had been the only previous players with multihomer games against deGrom.

Before a sparse crowd that appeared far smaller than the 22,126 announced, deGrom lacked his usual command. He went to full counts on six of his first 11 batters and needed 31 pitches to get through the second inning.

Schoop added a solo homer in the sixth off Seth Lugo and a three-run drive in the ninth off Jason Vargas. Jorge Polanco hit a two-run drive in the eighth against Robert Gsellman following an error by Alonso at first base that led to three unearned runs.

Garver had four of Minnesota’s 17 hits, and Polanco had a bunt single, triple and home run, three days after hitting for the cycle. New York has allowed 26 runs in its last two games.

Kyle Gibson was in position to win but was removed after 4 2/3 innings for the second straight start. He loaded the bases with a pair of two-out walks, and Trevor Hildenberger (2-0) retired Jeff McNeil on a flyout.

Michael Conforto and Alonso both homered for the third straight game, and Brandon Nimmo also connected for the Mets. Alonso became first Mets rookie to homer in three straight games since Benny Agbayani in 1999.

Mets catcher Travis d’Arnaud made his first start in a year and a day and went 0 for 5. D’Arnaud returned Sunday from Tommy John surgery.

Minnesota entered 1-5 at Citi Field after getting swept in a three-game series in September 2016. … Nelson Cruz was out of the starting lineup for the fourth straight game; the Twins played their fourth consecutive game in an NL ballpark after they lost two of three at Philadelphia. … With only several hundred fans remaining for a game that took 4 hours, 8 minutes, Vargas gave up four runs in the ninth in his first relief appearance since 2009 with Seattle, putting the Twins ahead 14-4.

Minnesota is scheduled to return home to play Detroit on Friday, and 6-12 inches of snow are forecast for Thursday night into the morning.

Mets: INF Todd Frazier, sidelined by an oblique strain that prevented him from playing in any spring training games, appeared in his fifth injury rehabilitation game for Class A St. Lucie. He played four innings at shortstop followed by five at third base. … INF Jed Lowrie (sprained left knee), who also missed the exhibition season, took grounders in pregame drills at Citi Field. Mets manager Mickey Callaway did not give a timetable for either player’s return.

Twins RHP Jake Odorizzi (0-1) starts Wednesday’s finale of a seven-game trip. RHP Noah Syndergaard (0-1) will be on the mound for the Mets.