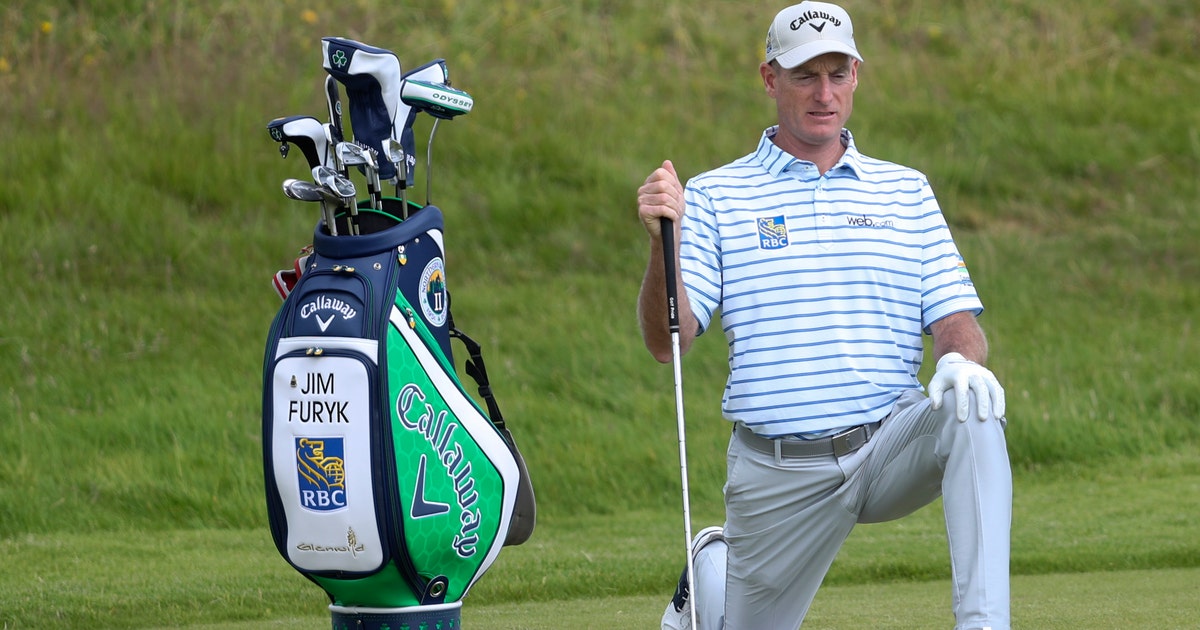 PORTRUSH, Northern Ireland (AP) — Nothing short of an eagle on the 592-yard seventh hole at Royal Portrush was going to win the hole in a friendly fourballs match during practice for the British Open. Leave it to 49-year-old Jim Furyk to have the best chance.

Furyk’s 18-foot putt from below the hole paused on the right edge of the cup before dropping, and he looked over in Cantlay’s direction with a grin.

These are good times.

Under the circumstances, not many people would have been surprised if Furyk was past his time by now.

He was last seen at the British Open in 2016 at Royal Troon when he finished 29 shots behind the record performance of Henrik Stenson. Furyk played only two majors last year, both on exemptions. He wasn’t eligible for any of the World Golf Championships last year for the first time since they were created in 1999.

Small wonder that fans who recognized him in the airport on his way to Northern Ireland asked if he was playing.

“I thought that was kind of funny,” Furyk said.

He has heard a lot of questions over the last decade that he found funny, if not irritating. One that still sticks with him was a writer who asked him 10 years ago if he feared the game was passing him by.

“I wouldn’t say it (ticked) me off, but I kind of chuckled,” Furyk said Tuesday. “I said, ‘Yeah, it’s going to pass me by some day, but not now.’ The next year, I had my best year and was player of the year.”

It’s not just about age.

Phil Mickelson is 49, born a month after Furyk, and he won the AT&T Pebble Beach Pro-Am. Mickelson is a special talent, with five majors and one of his 47 victories worldwide coming when he was still in college.

Part of it is devoting nearly two years of his life as Ryder Cup captain, with players appointed in their late 40s toward the end of their careers. Most are rarely heard from again on a big stage, with one exception being Davis Love III — another power player — who won at age 51 during his second stint as captain.

Furyk never had great length off the tee, and it stands out even more now.

He is a pea shooter in an era of cannons.

“So impressive,” said Brooks Koepka, the No. 1 player in the world. “I’ve played with him a little bit. He really understands his game. And I think when you fully understand what you can and can’t do is when you reach your maximum potential. He’s doesn’t have the big miss. He doesn’t have really any weakness. He’s very solid all throughout the bag. … That probably won’t be me when I’m 49, I can promise you that.”

Furyk was determined to press on after Europe won the Ryder Cup in France last fall. He was coping with a shoulder injury that no one paid much attention because there was more interest in his captain’s picks. Now that’s sorted out.

He had every reason to go into ceremonial mode, especially with the PGA Tour Champions — golf’s greatest mulligan — available to him next year. Instead, Furyk toiled in the offseason to find balance at home and work, to give himself the best chance to win.

“You have to have a motivation and a drive and a hunger to still compete,” Furyk said. “And as you get older, you run through different phases of your life. When I first came out on tour, golf was the most important thing in life. I got married, started a family, and the realization we’re going to be empty-nesters in a few years has hit me.”

His daughter, a pole vaulter, will be a senior in high school. His son will be a sophomore. He wants to watch them compete. Furyk said he was pacing the field at the Florida state high school championship in May when she finished ninth.

He’s coming up on 50. He’s short off the tee. And his time is stretched thin.

It all changed in March when he tied for ninth in the Honda Classic to get in The Players Championship, and then was runner-up at the TPC Sawgrass, one shot behind Rory McIlroy. That got him into a World Golf Championship.

He nearly made it into the Masters, but returning to the top 50 in the world put him in the next three majors. He now is No. 48 in the world, giving him another World Golf Championship next week. He is No. 36 in the FedEx Cup, and the Tour Championship is in sight.

“I enjoy seeing the game change,” Furyk said. “I don’t want to be that old, crusty guy that says, ‘Back when I was a kid, the game was different.’ It was. The game is always changing. But the best players will always evolve. … Right now, I’m trying to figure out how to keep adapting.”

And it keeps working.

He is one year older than his world ranking. At his age, with his length, that’s not a bad thing.