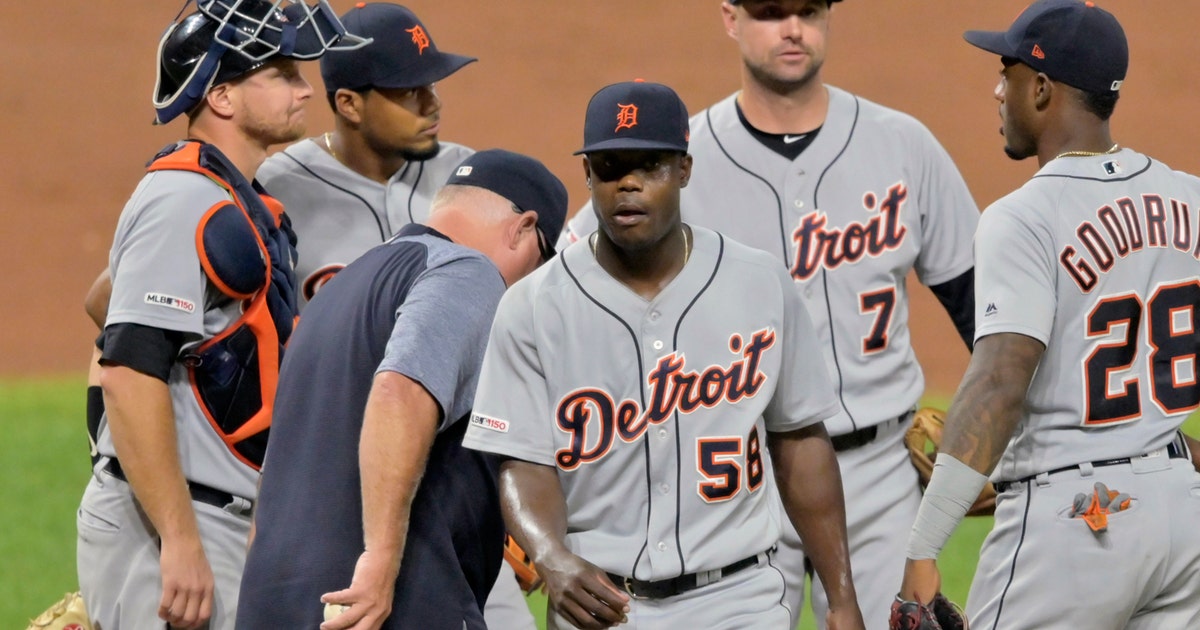 CLEVELAND (AP) — The Cleveland Indians wanted to bounce back from a disappointing series against the Minnesota Twins.

Oscar Mercado made certain they did.

Cleveland’s rookie outfielder hit his second home run of the game — a leadoff blast in the seventh inning — and the Indians continued to dominate Detroit with an 8-6 win over the Tigers on Monday night.

Mercado, who came into the game in a 1-for-25 skid, homered into the bleachers in left field off Victor Alcantara (3-2) to break a 5-all tie. Mercado also hit a solo home run off Detroit starter Daniel Norris in the fifth.

The Indians have won nine of 10 against the Tigers this season, including eight in a row.

Cleveland dropped two of three to AL Central-leading Minnesota coming out of the All-Star break. The Indians lost the first two games of the weekend series before salvaging Sunday’s finale and are six games behind the Twins.

“After losing the first two games, obviously that put a lot of pressure on us,” Mercado said. “Winning that game yesterday was absolutely huge. Going into this series, you take the first game and you definitely get back on track.”

The game was delayed for 54 minutes in the top of the seventh by heavy rain and strong winds. The grounds crew needed nearly a half-hour to clear the outfield warning track of standing water from the downpour.

Mercado was dealing with his first extended slump since being called up on May 14.

“I’ve got to thank my teammates for that one,” he said. “They know what it’s like. I’ve had a lot of conversations with them. They told me that’s how it’s going to go sometimes.”

Alcantara retired Francisco Lindor to end the sixth, but all four hitters he faced in the seventh had hits.

“He was fine physically, but he never hit a location one time,” Tigers manager Ron Gardenhire said. “It had nothing to do with the rain delay. He only threw two pitches (in the sixth) and he had to warmup, but he hadn’t pitched since July 3 and obviously the results weren’t good.”

Alcantara was making his first appearance since having a wisdom tooth removed.

Jordy Mercer homered twice for Detroit, including a leadoff shot in the ninth off Brad Hand. Victor Reyes singled, but Hand retired the next three hitters, including Miguel Cabrera and Nicholas Castellanos on strikeouts, for his 25th save in 26 chances.

Norris left in the sixth with a 5-3 lead. Tyler Naquin’s two-run double off Daniel Stumpf tied the game and ended Norris’ bid for his first win since May 12.

Trevor Rosenthal, released by Washington last month, pitched the eighth for Detroit, striking out two, allowing a hit and throwing a wild pitch. He was pitching at Triple-A Toledo after signing with the Tigers.

“He threw 99 (mph), had a good curveball, obviously missed a couple of pitches, but for the first time out, I liked what I saw,” Gardenhire said.

Tigers: OF JaCoby Jones (lower back strain) has reported for a rehabilitation assignment at Triple-A Toledo.

Indians: Manager Terry Francona said a decision will be made in the next couple of days when RHP Corey Kluber will begin throwing off a mound. The two-time AL Cy Young winner broke his right arm when he was hit by a line drive May 1 in Miami. Tests have shown Kluber’s arm is healing properly and he’s been playing catch from 150 feet.

Victor Reyes led off the game with a single, but was thrown out at home on Harold Castro’s double. Mercado made a strong relay from center field to Lindor, who threw to catcher Roberto Perez.

Reyes bowled over Perez, who hung on to the ball. The Tigers challenged the play that Perez didn’t give Reyes a clear path to the plate, but the call was confirmed.

“You’re supposed to give a guy a spot to slide, but he had no lane to use to get to the plate,” Gardenhire said.

“I was kinda holding my breath a little,” Francona said. “I don’t know what else (Perez) could do.”

Tigers: LHP Ryan Carpenter (1-5, 8.36 ERA) will be recalled from Toledo to start Tuesday. RHP Jose Cisnero was optioned to Toledo.