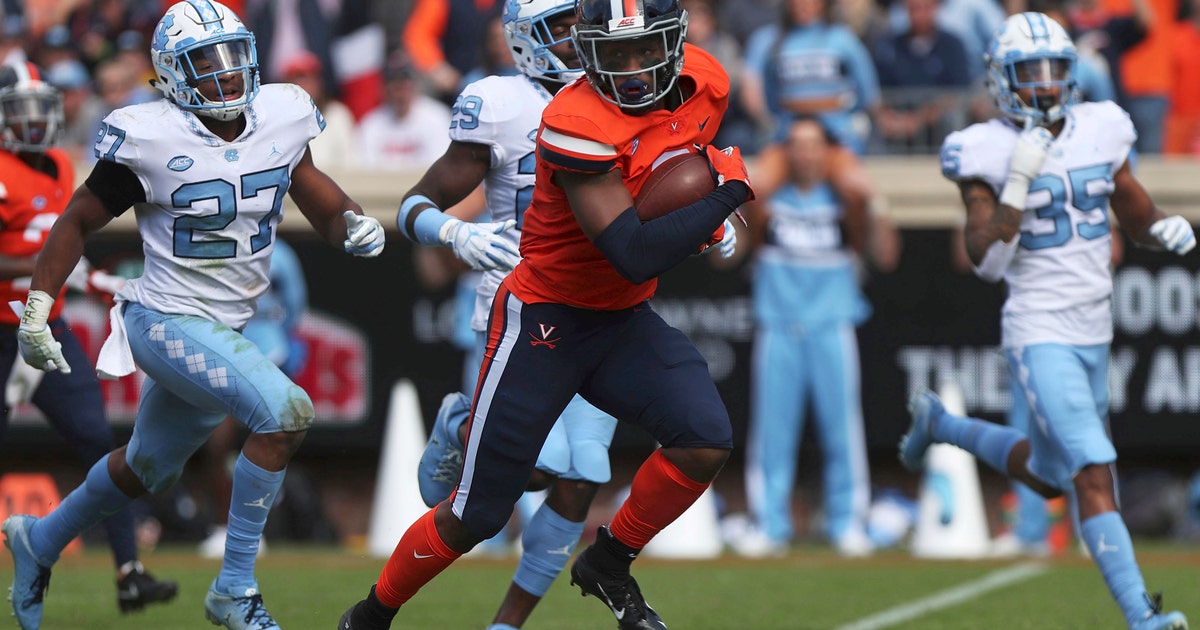 Ending last season on a high note gave Virginia plenty of momentum heading into the offseason, and coach Bronco Mendenhall has said the positive energy continued during spring practice and summer workouts.

But Virginia has some holes to fill around quarterback Bryce Perkins to build on its success.

As the start of fall practice approaches, the Cavaliers need to identify the playmakers most likely to fill the voids left by the graduations of Olamide Zaccheaus and Jordan Ellis.

Zaccheaus finished last season with 93 receptions for 1,058 yards and caught three touchdown passes in Virginia’s 28-0 victory against South Carolina in the Belk Bowl. Ellis ran for 1,026 yards — including 106 and the Cavaliers’ other touchdown in the bowl game.

For the season, Ellis scored 10 touchdowns and Zaccheaus finished with nine.

The return of Perkins gives the Cavaliers one constant on offense, but for him to match his production of a year ago (25 touchdown passes, 923 rushing yards and nine more TDs running), Virginia needs new threats lining up inside and out that prevent defenses from zeroing in on Perkins.

Enter Hasise Dubois and Joe Reed, the top returning receivers from a year ago.

“I am really excited to see what Joe does. Hasise as well,” wide receivers coach Marques Hagans said Monday. “Joe will be healthy and I think that’s something he played through last season, which is a testament to who he is, but … he shows up every day. You know exactly what you’re going to get. He works hard. He doesn’t complain. I think those two guys will bring a lot to the table, especially leadership-wise. We’re going to lean on those guys heavily.”

Dubois caught 52 passes for 578 yards and five touchdowns last season, doing a lot of his work over the middle.

Reed caught just 25 passes, but for 465 yards and seven touchdowns. He also scored on a kickoff return.

At running back, Virginia will be inexperienced. Returnees combined for just 33 carries for 123 yards last year, and Mendenhall said sophomore Wayne Taulapapa was the top performer in the spring and would head into fall practice No. 1 on the depth chart. Taulapapa’s lone statistical contribution last season was one tackle on special teams.

Dubois is eager to show he can be more than a possession receiver.

“It’s actually a great opportunity because basically it allows me and Joe to just take over all what (Ellis) and Olamide did and everyone’s watching to see if we can own up to it,” he said Tuesday.

Mendenhall called junior Terrell Jana “one of the bright spots of the spring,” both for his productivity and leadership. Dubois believes Jana’s presence working as a slot receiver only makes Virginia more dangerous.

“He’s due for a breakout,” Dubois said, adding Tavares Kelly to the list of players he expects to produce more. “It feels like with all of us in the receiving corps, we have a really good team to take the top off of defenses.”

And once they can do that, defenses won’t be able to key as much on Perkins’ running ability.

“You just have to beat one-on-one coverage and be able to make plays down the field and, once you do that, teams won’t know who to stop, what coverage to play,” Dubois said. “We have to do our job and excel on the outside.”

Hagans, himself a dual-threat quarterback for the Cavaliers from 2002-05, said Virginia has enough talent on offense to prevent Perkins from having to do too much, but added that part of that falls on the quarterback, too.

“I think a big part of what he has to do now is — he’s proven that he can do it — what he’s got to do now is prove that he can get other people to do it,” Hagans said. “I think that’s the next step he’s starting to take.

“He’s bringing other people along to match his work ethic and where he wants the team to go.”

If Perkins succeeds, and the playmakers do, expectations will only get higher.