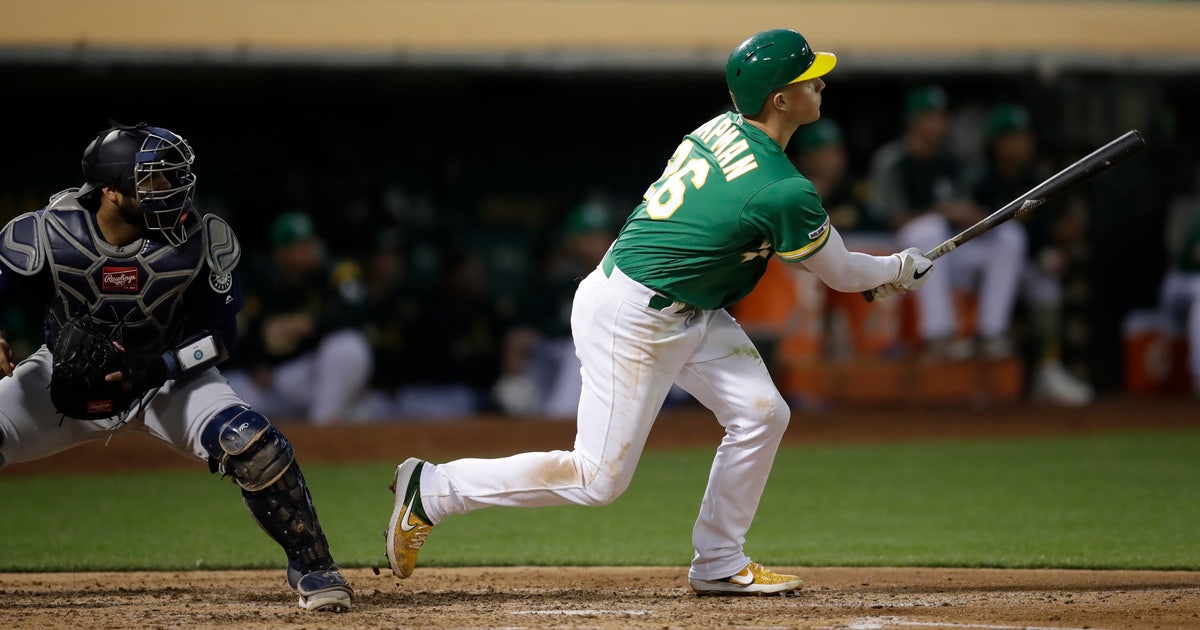 The two slugging Matts provided Daniel Mengden (5-1) all the support he needed. Mengden allowed one run and four hits over seven impressive innings, striking out three and not walking a batter for the third straight start.

In the seventh, Marcus Semien got a double out of a miscue by the Mariners when first baseman Austin Nola tripped over right fielder Domingo Santana in shallow right.

Omar Narvaez hit two homers for the Mariners. Narvaez connected in the second before the A’s answered in the third with Chapman’s two-run single.

Chapman, who added a run-scoring double late, had six RBIs on June 30 at the Angels.

Oakland has won seven of eight and 11 of 13, heating up as the second half begins just as the A’s did last season on the way to their first playoff berth in four years.

Mariners lefty Marco Gonzales (10-8), who had been 4-1 in his first seven outings and six starts against the A’s, was tagged for six runs and seven hits over six innings. He struck out five and walked one in Seattle’s fifth consecutive loss.

Oakland is 18-8 when facing a left-handed starter.

Plate umpire Brian O’Nora left in the fifth after getting hit in the head by Santana’s bat on a follow-through in the third. Second base ump James Hoye replaced O’Nora after a brief delay.

Mariners: RHP Felix Hernandez was scheduled to play catch on the mound Tuesday and throw his first bullpen of about 25 pitches Thursday as he works back from stiffness in his pitching shoulder. … RHP Hunter Strickland (lat strain) was scheduled to throw live batting practice at Triple-A Tacoma on Wednesday and if that goes well he’ll begin a rehab assignment with Tacoma or another minor league affiliate. … Seattle activated RHP Sam Tuivailala from the injured list Monday and he made his season debut in the eighth across the bay from where he grew up in San Mateo. Manager Scott Servais wanted to find a “soft landing,” given Tuivailala is returning from a ruptured right Achilles tendon. … Seattle selected OF Kristopher Negrón from Triple-A Tacoma, recalled RHP Erik Swanson from Tacoma and designated OF Mac Williamson for assignment.

Athletics: RF Stephen Piscotty, out since June 30 with a sprained right knee he injured sliding into second, has started running and hopes to turn corners Wednesday before continuing his rehab when the team leaves town. He could rejoin the A’s early next week in Houston and then begin a rehab assignment shortly thereafter. “I’m thankful it wasn’t worse,” Piscotty said. … LHP Sean Manaea, working back from shoulder surgery, threw a 15-pitch bullpen and is scheduled to appear in a game Thursday for Class A Stockton, with the plan for him to reach up to 65 pitches.

Right-hander Homer Bailey arrived in the Bay Area and headed straight to join his new team at the Coliseum, where he will make his A’s debut against the Mariners on Wednesday night after being acquired in a trade from the Royals on Sunday.