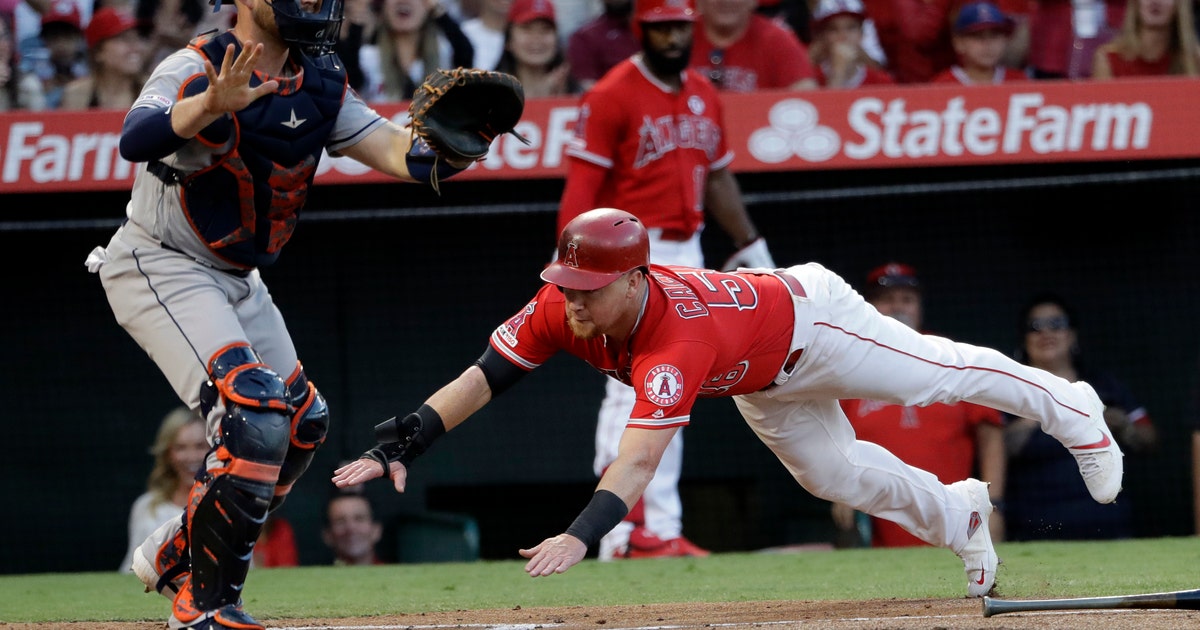 A look at what’s happening around the majors today:

The grieving Angels go for their sixth consecutive victory since the All-Star break when they host Houston again. Los Angeles (50-46) has won eight of 11 since the death of pitcher Tyler Skaggs and moved four games above .500 for the first time since June 2018. Star outfielder Mike Trout hopes to return to the lineup after missing the past two games with a mildly strained right calf. All-Star righty Gerrit Cole (9-5, 3.23 ERA), who graduated from nearby Orange Lutheran High School, pitches for the Astros against an opener and Félix Peña (7-2, 4.32 ERA), who threw the final seven innings of the Angels’ combined no-hitter last week.

Homer Bailey makes his Oakland Athletics debut against last-place Seattle after being acquired from Kansas City in a trade Sunday. Bailey (7-6, 4.80 ERA) arrived Tuesday in the Bay Area and headed straight to join his new team at the Coliseum, saying he knew “absolutely zero” players on the A’s. The right-hander is 3-0 with a 2.83 ERA in his last six starts for his longest winning streak since four consecutive victories in 2014 for Cincinnati. Oakland has won five in a row to move within 4½ games of the AL West-leading Astros, matching their smallest advantage since May 9.

Cubs right-hander Yu Darvish (2-4, 4.72 ERA) faces Sonny Gray (5-5, 3.42) and the Reds in the rubber match of a three-game series between NL Central foes. Darvish, who has 13 no-decisions in 19 starts this season, is still looking for his first win at Wrigley Field since signing with Chicago last year. Gray will be making his first career appearance at the iconic ballpark.

PLAYING WITHOUT A FULL DECK

Already missing injured regulars Yadier Molina and Marcell Ozuna, the St. Louis Cardinals will also be minus Matt Carpenter for a while after the infielder was placed on the 10-day injured list Tuesday with a bruised right foot. Carpenter fouled a pitch off the top of his foot Monday night and left the game. The team said X-rays were negative. “Just got to wear this boot for four to five days and then hopefully the swelling and inflammation goes down and I can start doing what I need to do,” Carpenter said. “They’re optimistic it won’t be more than a week.” Carpenter is the seventh Cardinals player on the injured list. He was just activated last Thursday after being sidelined since June 29 with a lower back strain.

Indians ace Corey Kluber is scheduled to throw 20 fastballs in his first bullpen since breaking his right arm when he was struck by a line drive May 1. The two-time Cy Young Award winner is on the 60-day injured list. Cleveland manager Terry Francona called the session “a big step, a good step,” but cautioned that Kluber is still weeks from potentially beginning a minor league rehab assignment. The surging Indians have won three straight and eight of 10 to move within five games of first-place Minnesota in the AL Central, the tightest margin since May 19.

One night after the latest surly clash between Yankees pitcher CC Sabathia and the Tampa Bay Rays, the AL East rivals meet again in the Bronx. Yonny Chirinos (8-4, 3.11 ERA) faces New York right-hander Domingo Germán (11-2, 3.40) in the third game of a four-game set. Chirinos has made seven straight quality starts. Germán is 2-0 with a 0.75 ERA in two starts since returning from the injured list.