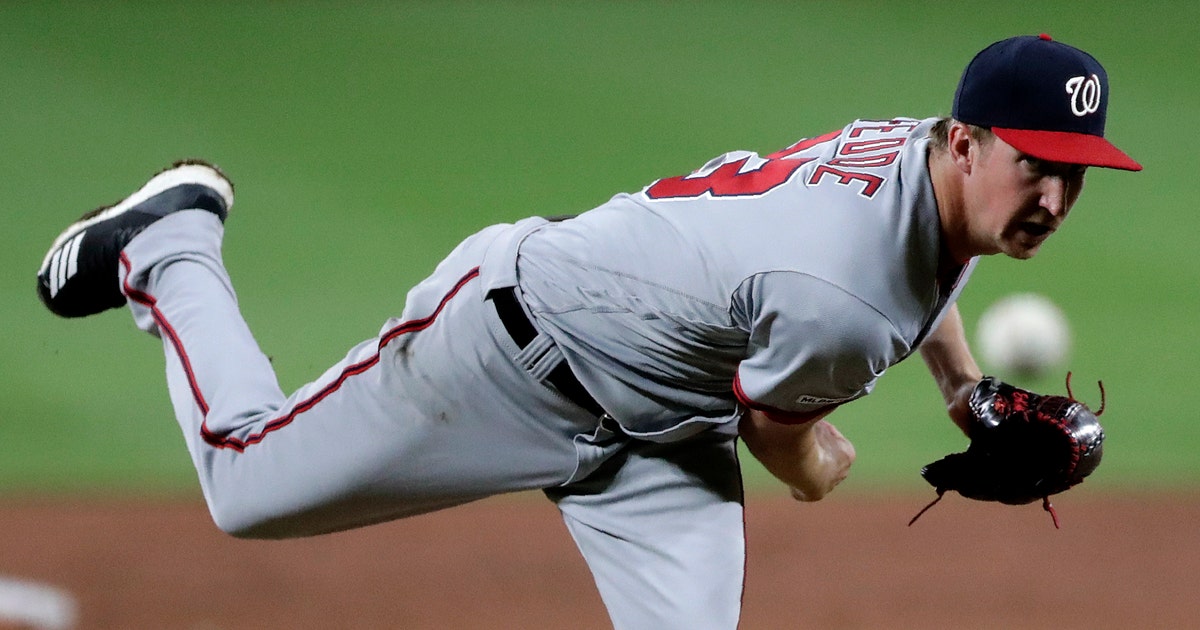 BALTIMORE (AP) — Trey Mancini hit two home runs and Baltimore pummeled the Washington Nationals‘ ineffective bullpen in a 9-2 victory Wednesday night that provided the Orioles with a split of the two-game interleague series.

The defeat — only the fourth in 17 games for the Nationals — kept them 6 1/2 games behind the first-place Braves in the NL East. Washington opens a four-game series in Atlanta on Thursday night.

Adam Eaton drove in both runs for the Nationals, who suffered their most lopsided loss since June 15 (10-3 against Arizona).

Recalled from Double-A Harrisburg to face the team with the worst record in the majors, Erick Fedde allowed one run and five hits over six innings and left with a 2-1 lead.

The Orioles promptly turned it around against a Washington bullpen that entered with a 5.86 ERA and 18 blown saves.

Wander Suero (2-5) faced five batters and retired only one of them. Anthony Santander and Chris Davis hit RBI singles, and Rio Ruiz delivered a sacrifice fly off Tony Sipp before Javy Guerra finally quelled the uprising.

But Mancini connected off Guerra in a five-run eighth. Mancini also homered in the fourth, breaking a run of 15 games without a long ball.

Mychal Givens shut down a two-on, two-out situation in the eighth and stayed on for his eighth save.

The start of the game was delayed by rain for 1 hour, 32 minutes.

Pitching for the Orioles’ Double-A affiliate, Michael Baumann threw a no-hitter for the Bowie Baysox against Washington’s affiliate, the Harrisburg Senators, on Tuesday night.

The right-hander struck out 10 and walked two in a 6-0 victory.

Baumann was selected out of Jacksonville University in the third round of the 2017 draft.

Ravens quarterback Lamar Jackson and former Maryland defensive back Darnell Savage, the first-round pick of the Packers, both threw ceremonial first pitches. Jackson lobbed a strike, and Savage bounced one in front of the plate.

Orioles 2B Hanser Alberto left the team to be with his wife, who was due to give birth to the couple’s second child Wednesday. He was not placed on paternity leave, and manager Brandon Hyde expected Alberto to return on Friday

Nationals: Three-time Cy Young winner Max Scherzer (back strain) threw in the outfield for a second straight day and could come off the injured list Sunday for a start in Atlanta, depending on how he feels over the next couple of days.

Orioles: RHP Dylan Bundy (knee) threw a side session Wednesday, and is on course to come off the IL next week. … RHP Nate Karns (forearm strain) pitched two innings for Bowie on Wednesday. … OF Dwight Smith Jr., who’s stuck in an 0-for-30 skid, got the day off in part to deal with “aches and pains,” Hyde said.

Orioles: After taking Thursday off, Baltimore and All-Star pitcher John Means (7-5, 2.94) take on the visiting Boston Red Sox in the opener of a three-game set.