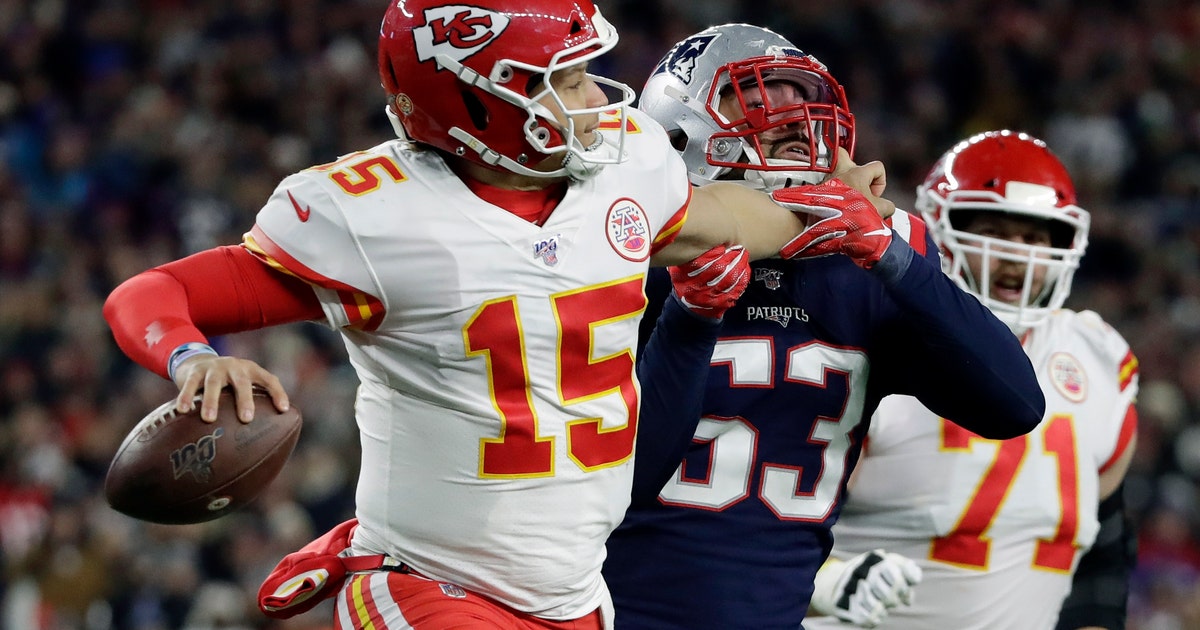 KANSAS CITY, Mo. (AP) — Patrick Mahomes is quickly earning a reputation as one of the toughest quarterbacks in the NFL.

That’s not necessarily a good thing for the Kansas City Chiefs.

From the sprained ankle in the season opener against Jacksonville, to the dislocated kneecap against Denver that caused him to miss a couple of games, to the bruised and battered hand that caused him all kinds of problems in New England, the second-year starter and reigning league MVP has managed to deal with all the pain that comes with playing the position.

Not just deal with it but flourish in spite of it.

But if the Chiefs are to win their final three regular-season games, and perhaps swipe away a first-round playoff bye from the Patriots, they need their star quarterback on the field. And that means the Chiefs need to figure out a way to prevent Mahomes from taking so much abuse beginning Sunday against the Broncos.

“That comes with playing the quarterback position, I think, in this league,” Chiefs coach Andy Reid said. “As it goes, you’re the face of the organization and the leader of the team. There are certain things that you have to do and step up. It’s not just one thing — it’s not that you just have to throw the ball 50 yards down the field, but that you lead the guys around you to be even better than what they are. He has an innate ability to do that. He keeps everybody involved on both sides of the ball.”

In other words, good luck convincing Reid to take Mahomes out unless the quarterback is seriously hurt.

Good luck convincing Mahomes to leave the game, too.

“It doesn’t feel great right now,” he said of his latest hand injury, “but it’s something that you play with. In this sport, you’re going to get hurt, you’re going to bang something. So for me, it’s about going out there and competing and relying on my teammates to help me out whenever I’m not feeling 100 percent.”

That’s been the case for about 99 percent of this season.

Not much of the blame falls on the offensive line, though. Mahomes only has been sacked 13 times, a modest number even given the couple of games he missed with his knee injury. He also is among the least-hit quarterbacks in the league when you consider the fact that Kansas City often sends him back to pass 40 or more times a game, and that much of the Chiefs’ offensive system is predicated on run-pass options that can put him in peril.

The ankle injury, for example, occurred when an offensive lineman stepped on his foot. The knee injury came on the most innocuous of plays: a quarterback sneak. The hand injury against the Patriots came when Mahomes got hit awkwardly.

“I was trying to throw that ball away and got hit, threw it away and got tackled right as I threw it away,” he said. “I knew something was wrong but I didn’t know for sure. Then I tried to fire that next pass and it didn’t look too pretty, so I kind of just let the trainers look at it. They gave me the good-to-go and so I went out there, battled, figured out ways to throw the ball across the middle and maybe not shoot those long shots that I usually throw but enough to get them back.”

The numbers bear out the difference. Mahomes threw for 226 yards with a touchdown in the first half against New England, when the Chiefs raced to a big lead. They threw for just 57 yards in the second half, when they held on for a 23-16 victory.

Yet just by finishing the game, Mahomes provided more evidence he is becoming one of the elite QBs.

The Packers’ Brett Favre may have set the standard as an NFL ironman, starting more than 300 consecutive games while playing through a broken thumb, a sprained ankle, a separated shoulder and torn biceps. And the three-time MVP did all of that while playing in one of the harshest environments in the league in frigid Green Bay.

Other quarterbacks also belong in the pantheon of ironmen: Peyton Manning overcame neck surgery to continue his career, Tom Brady has only missed just over a season during the course of his career, and many people forget that before becoming a television analyst that Ron Jaworski once started 123 consecutive games from 1977-84.

The Chiefs would love Mahomes to put together a similar starting string.

Notes: DE Frank Clark will see a specialist this week for a stomach ailment that has been bothering him for the past couple of weeks. He managed to play against New England before it flared up again. “We found somebody he can go see and might be able to get a grasp on this thing and see exactly what it is,” Reid said. “That’s where we’re at, kind of waiting, trying to keep him as comfortable as possible.” … RB Damien Williams practiced Wednesday after missing last week’s game with a rib injury. … CB Morris Claiborne (shoulder) remained out of practice.