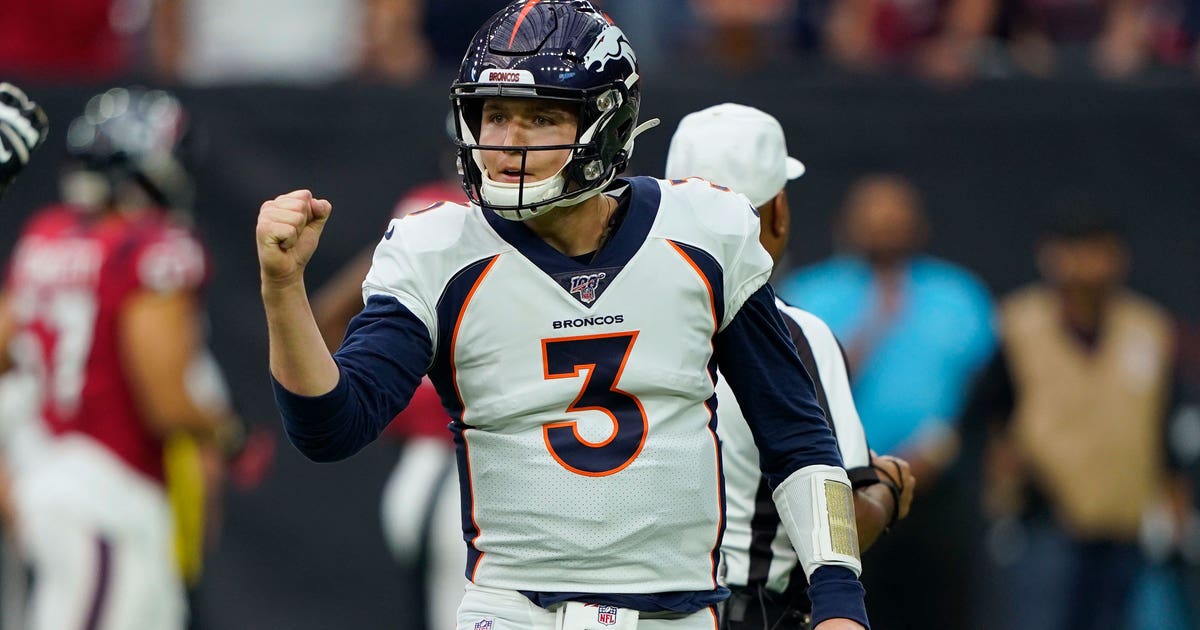 ENGLEWOOD, Colo. — Drew Lock admired the way teammate Kareem Jackson handled his homecoming in Houston. The veteran defensive back kept his cool all week and channeled his energy into a big game on Sunday.

Denver’s rookie quarterback aims to emulate Jackson and become the team’s next homecoming king when the Broncos (5-8) visit the Kansas City Chiefs (9-4) this weekend.

“I’m going to do the same thing that Kareem did,” Lock said Wednesday. “I’m going to keep it very simple, very ‘not about me,’ very that ‘it’s just another game’ we’ve got to go play and we’ve got to go win, and if it does happen that we win, I think the guys will celebrate me like they did Kareem.”

Jackson, who spent his first nine seasons in Houston, set the tone for Denver’s 38-24 stunner with a jarring hit on DeAndre Hopkins. He also broke up three passes and joined Fred Weary and Brian Urlacher as the only players in NFL history with at least 10 tackles, an interception and a fumble return for a touchdown in a single game. That earned him his first AFC Defensive Player of the Week honor.

Lock starred in football and basketball at Lee’s Summit High School about 15 miles from Arrowhead Stadium, then turned down several college basketball scholarships to play football at the University of Missouri, where he posted the second-highest passing (12,193 yards) and third-most TDs (99) totals in SEC history.

A second-round draft pick this spring, Lock spent three months on IR with a sprained right thumb before becoming the seventh starting quarterback in Denver since Peyton Manning’s retirement.

He’s the first Broncos rookie quarterback to win his first two starts since his boss, John Elway, did it in 1983, and last week he became the only rookie QB ever to throw for 300 yards and three touchdowns in his first road start.

The Broncos have lost eight straight to Kansas City, and their previous win at Arrowhead came on Sept. 17, 2015, when Denver scored two touchdowns in the final 36 seconds to stun the Chiefs 31-24.

Lock said he’s been to Arrowhead too many times to count, and always in red and yellow.

Lock has injected some enthusiasm in Denver by throwing five touchdown passes with two interceptions in his two starts, and the Broncos have scored at least 23 points in consecutive games for the first time since October 2018.

Lock said he won’t let anything distract him this week, noting his mother is handling ticket requests “so I can kind of avoid that whole hassle.”

“It’s probably going to be hard for me to change their minds when you have an MVP quarterback on the team, unless one day that ends up happening with me,” Lock said. “But no, Patrick is their guy and you know I’m just here to prove myself to these guys in this locker room and keep proving it to everyone around here that I should be the guy for this job.”

Lock even has a connection to Reid, who followed Bob Stull to Columbia in 1989 to be his offensive line coach. Andy Lock, Drew’s father, was a senior offensive tackle that year.

After Lock won his first start against the Chargers two weeks ago, his teammates razzed the rookie, nicknaming him “Buzz Lightyear ” because the large white wristband he wore to help him remember the play calls resembled the Disney icon’s forearm laser beam.

So, Lock replaced his “secure the bag” touchdown celebration from college with an impersonation of Buzz Lightyear firing his laser beam. On Monday, coach Vic Fangio said he didn’t understand the buzz over Buzz because he had never seen any of the four “Toy Story” movies and didn’t know Buzz Lightyear from Buzz Aldrin.

Asked if that surprised him, Lock’s eyebrows hopped high.

“I actually didn’t know that he didn’t know,” Lock said, laughing. “Yeah, I’m going to have to have a talk with him.”