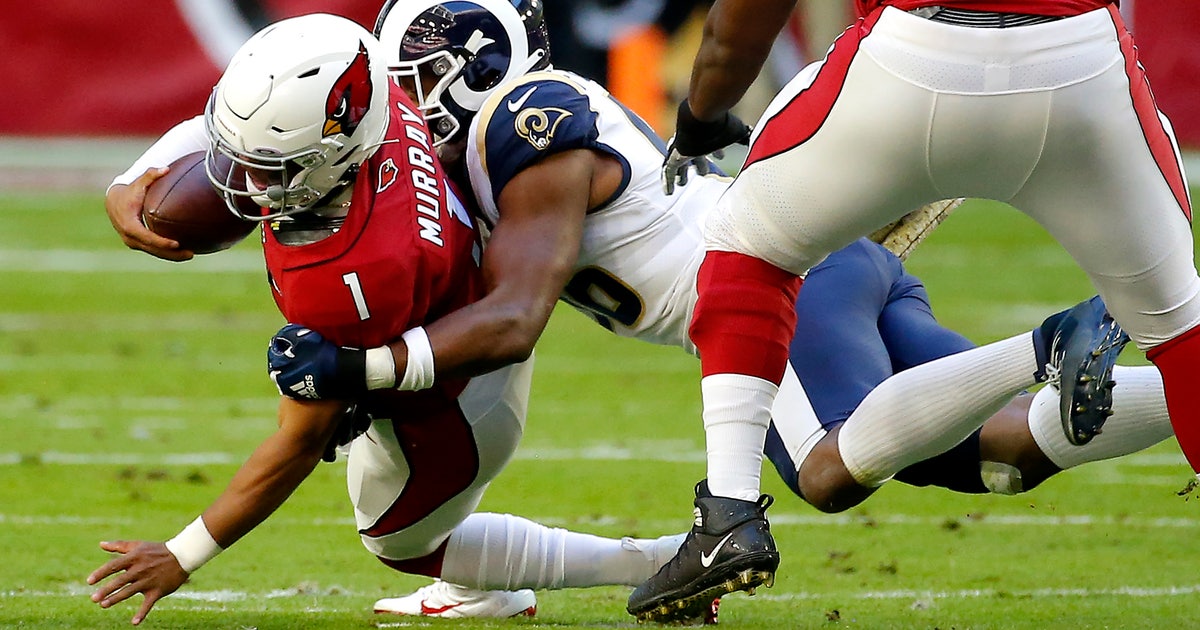 Linebacker Clay Matthews realizes sacks and pressures don’t win games by themselves, but the Rams’ success in pursuing passers is playing a significant role in their pursuit of a playoff spot.

“That’s what you’ve been seeing all year, really,” said Matthews, who has eight sacks. “You’ve got a number of guys who are close to 10 sacks, constantly bringing pressure and making quarterbacks uncomfortable. That’s what I think the culture should be.”

With 11 sacks in the last two games, the Rams (8-5) have moved up to fourth in the league with 43 sacks this season. They’ve already surpassed their full-season total from last year’s Super Bowl campaign as they head to Dallas on Sunday to play a key matchup for both teams’ playoff hopes.

“We were just talking about that earlier,” said Aaron Donald, who leads the Rams with 11 sacks. “’We’ve got 43 sacks this season? That’s pretty good.’ But we’ve got room for improvement. We’ve missed a lot of sacks. We’ll keep getting better.”

With Dante Fowler already registering a career-high nine sacks, the Rams and the Pittsburgh Steelers are the NFL’s only teams with three players in the league’s top 25 with at least eight sacks apiece.

After recording only 13 sacks in their first six games before the arrival of cornerback Jalen Ramsey, the Rams have racked up 30 in the seven games since, culminating in 11 sacks over the past two games.

Donald recorded 20 1/2 sacks last season in a performance that could stand for years as the apex of quarterback pressure from an interior lineman. The superstar defensive tackle has 11 this season, but Donald is grateful to have much more help getting after the quarterback.

“We just all play off each other,” Donald said. “There’s times that Dante is going to make an inside move and I play off of him and wrap around, or I get a little wide and he wraps off of me, goes inside and gets a free sack. We play good together. When you’ve got a bunch of guys that can get after the quarterback like we’ve got and they can move around and everybody is playing good off each other, you tend to have a lot of success.”

Fowler and Matthews both direct praise to Rams outside linebackers coach Chris Shula for putting them in positions to succeed in coordinator Wade Phillips’ defense.

Ramsey’s presence is also frequently cited as a key to the Rams’ success. The pass rushers are feeding on the freedom created by the secondary’s ability to play man-to-man coverages since the arrival of Ramsey, who excels as a lockdown corner.

The Rams finished 15th in the league with 41 sacks last season despite a record season from Donald, who dropped the quarterback more times than any interior lineman in NFL history. Fowler contributed to the rush after his midseason arrival from Jacksonville, but the Rams didn’t converge on the quarterback with the urgency they’ve showed in recent weeks.

Fowler has seven sacks in the last six games.

“It just makes me more confident in myself,” said Fowler, who could hit free agency next spring. “I just kept telling myself I could do it, and I’m just glad I was able to show you guys I could do it and be consistent. Just to be able to work with guys like AD and Clay … I probably wouldn’t be able to do it without everyone.”

The big three aren’t the only defensive players getting after quarterbacks. Michael Brockers, who does much of the unsung work on LA’s defensive line, has three sacks as well.

Linebackers Samson Ebukam and Cory Littleton are also taking advantage of chances to chase the quarterback, combining for six sacks and 12 quarterback hits. Littleton does everything for the Rams as their leading tackler, while Ebukam has seized the chance to play a pressure role in recent weeks, getting all of his 3 1/2 sacks over the past three games.

“We’ve just continued to step up and take a step forward for this defense,” Matthews said.

NOTES: WR Cooper Kupp could be the Rams’ punt returner in Dallas if Nsimba Webster isn’t able to return from a hip injury. Coach Sean McVay indicated that the valuable Kupp could be under orders to fair-catch most punts if he is forced to take the role. … TE Gerald Everett still has a knee injury that could sideline him for yet another game, but McVay wasn’t sure. … The Rams didn’t hold a practice Wednesday, instead doing just a walk-through workout. … RT Rob Havenstein could be ready to return from a knee injury that has sidelined him for a month, but neither Havenstein nor McVay would speculate on his role. Rookie Bobby Evans has played solidly in Havenstein’s place.