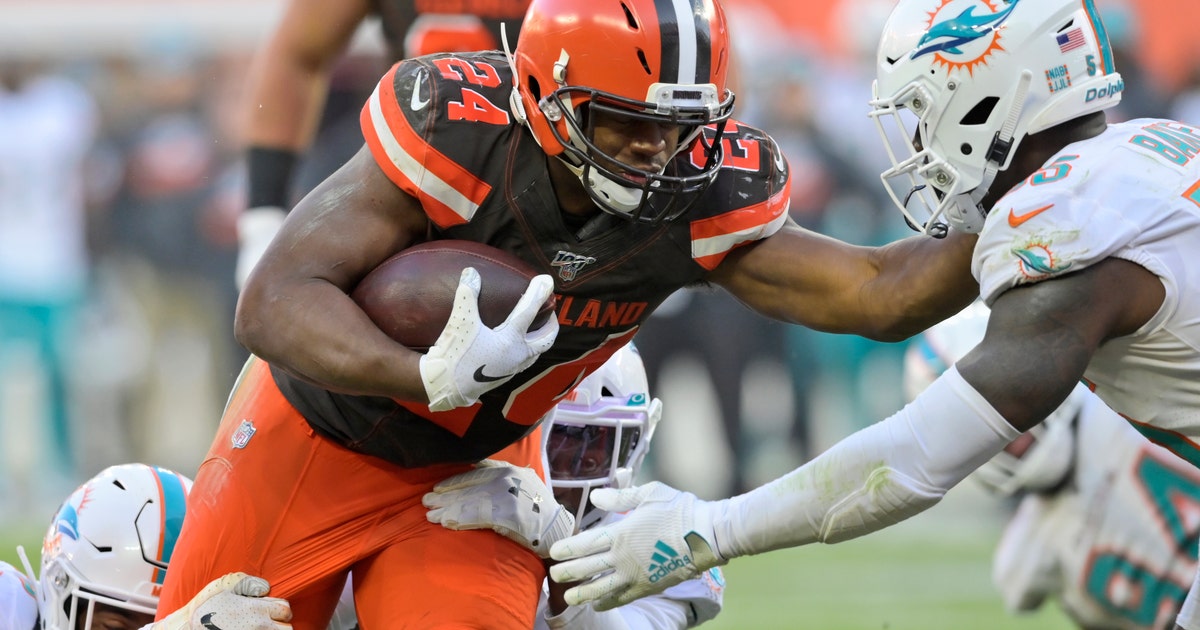 CLEVELAND (AP) — The chant began almost as a pleading cry and has grown into something of a commandment during Browns home games this season.

It slowly builds and reaches a crescendo whenever Cleveland’s offense faces a pivotal situation or needs a big play. Before the ball is snapped, Browns fans make it clear to first-year coach Freddie Kitchens, who is also handling play-calling duties, by screaming what they want him to do with the ball.

Give it to Nick Chubb.

“Yeah, I hear it,” the unassuming running back said, flashing an easy smile. “It gets me hyped. It gets me excited.”

It gets him yardage and no back in the NFL has gained more this season than Chubb, the hard-working, second-year back from Georgia who heads into Sunday’s game against Arizona with 1,281 yards — 38 more than Tennessee’s Derrick Henry and 61 more than Carolina’s Christian McCaffrey.

If he can hold off those two and finish the season on top, Chubb will be the first Browns player to lead the NFL in rushing since 1968, when Hall of Famer Leroy Kelly gained 1,239 yards in 14 games.

True to his nose-down, no-frills style, Chubb, who finished with 996 yards last season, said winning the rushing title belt wouldn’t be anything special. To Chubb, it would represent the sweat and blood he’s put into his craft during grueling, year-round weight-room workouts.

“It will mean a lot to me only because how hard I worked and it paid off for me,” he said this week as the Browns (6-7) prepared to play the Cardinals (3-9-1). “That’s really the biggest thing for me is just when I work hard, it shows and I get the results that I want.”

Hard work. They should stitch that onto the back of Chubb’s brown jersey, along with a blue collar.

Since the day he arrived in Cleveland, the second-round pick has impressed coaches and teammates with his relentless drive and a selflessness that seems out of place in a sport where individual success is celebrated.

Chubb doesn’t just shun the spotlight. He hides from it.

During a game this season against the Miami Dolphins, Chubb wore a microphone for NFL films, which captured a moment that describes him perfectly.

As he sat on the sideline after a touchdown run, Chubb was approached by star wide receiver Odell Beckham Jr., who said to his teammate, “I wanna score a touchdown.”

Not missing a beat, Chubb replied, “I wanna win.”

That’s Chubb in a nutshell. A very hard nutshell.

Chubb’s guarded, almost defiant attitude could be off-putting to those who don’t know him. But Browns left guard Joel Bitonio said that while Chubb may be on the brink of stardom, he remains the same humble 23-year-old who isn’t worried about any stat besides than the final score.

Others can keep track of his yards and records, Chubb is counting only his reps on the squat rack. He’s aware the rushing title is within reach, but he’s not making it a priority.

“I work out with him every Wednesday morning and, just the same quiet guy, hasn’t said a word about it,” Bitonio said. “You hear guys say all I want is the team to win, all I want is team success and I’m willing to bet Nick truly does want just team success and he would trade wins and everything for yards and touchdowns and it’s a credit to him, man.

“You get a team of 53 Nick Chubbs, you’re going to be doing something right.”

Chubb, whose breakaway speed has surprised defensive backs, leads the league with 253 carries. However, it’s not shocking that he insists he feels “fresh” despite the workload. His 5.06-yards per carry average is also tops, and Chubb’s 98.5 yards per game are the most by a Browns player since Hall of Famer Jim Brown, considered by many to be the greatest back in pro football history.

He’s also the first Browns back to gain 1,000 yards from scrimmage in his first two seasons, one of the few feats Brown didn’t accomplish.

Chubb sees it as a team award.

“We’re all in this together,” he said. “I’m just happy to be able to do it for the Cleveland Browns and to be a apart of this journey that I’m on. I’m happy I have everyone here with me going through it with me. Everybody plays a part. The blocking, the guys block on the outside, the receivers, the O-line — just everyone. It is not just me.”

Chubb’s public persona hasn’t changed, but he may be feeling a little like a superhero.

“I’m whatever Cleveland needs me to be,” he wrote.

What did he mean?

“That’s just a Batman quote. I like Batman,” he said. “That’s pretty much it. Don’t look too deep into it.”