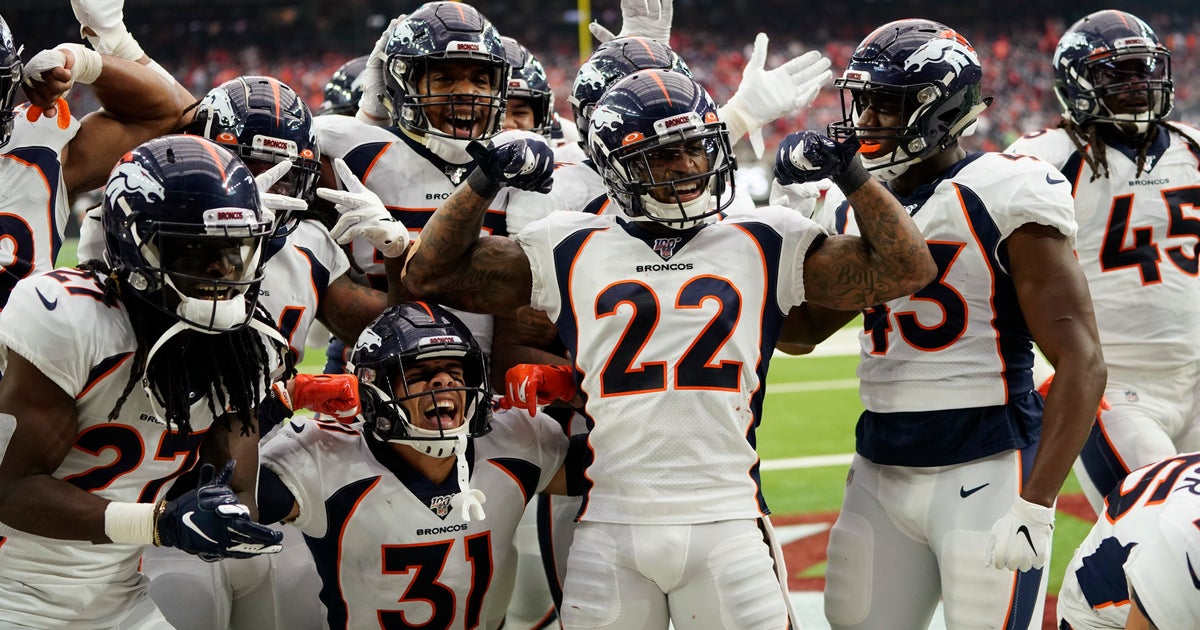 ENGLEWOOD, Colo. (AP) — Kareem Jackson may not have received kudos from his head coach but he certainly got them from his defensive coordinator.

“There’s not many people in this league that have transferred to a new position and been that productive that soon,” Ed Donatell said Thursday of Denver’s cornerback-turned-safety. The historic Houston homecoming by the player nicknamed K-Jack sparked the Broncos‘ stunning 38-24 win over the Texans.

“It’s a new position for him, but he knows football,” Donatell said. “But the rare thing about him is to see a guy at that size (5-foot-10, 183 pounds) be able to produce so much impact at contact. And he gets all the power from the ground, and that’s sort of a natural thing that some guys come to the league with and he has it.

“He plays big and he delivers the punishment.”

Jackson was named the AFC’s top defender for Week 14 after he joined the Saints’ Fred Weary (1999) and Hall of Famer Brian Urlacher (2011) as the only players in NFL history to record 10 or more tackles, intercept a pass and score on a fumble return in the same game.

Jackson set the tone for the upset with a jarring hit on DeAndre Hopkins, one of three passes he broke up in his much-anticipated return to NRG Stadium, where he played his first nine seasons before signing with the Broncos in the spring.

His 11 tackles tied a career high and his fumble return for a TD covered 70 yards.

Asked 24 hours later if he had envisioned Jackson’s shift to safety going so well, Vic Fangio delivered a blunt performance appraisal of his prized free agent.

Jackson “still shows at times lack of safety experience and lack of clean knowledge of everything,” Fangio said. “But overall we’ve been very happy with him. We were forced to play him at nickel some early in the year. I think that set him back a little bit.”

And what exactly is a lack of clean knowledge?

“I mean there are some fine points that he isn’t clean on yet at times,” Fangio explained. “One or two of them show up every game and show up out on the practice field every now and then. What little experience he had at safety in Houston, and it was very little, really hadn’t had much carryover to here and the way we play.

“Then he had some hamstring issues in camp, if you remember, and missed about 10 days, I think. He’s just, he could be better. I’m not trying to sound like Debbie Downer here after he had a hell of a game yesterday, but there’s room for improvement there.”

Yet, Jackson didn’t disagree with his head coach’s assessment.

“I’m constantly trying to figure out ways to get better in this scheme,” Jackson said. “He’s right. For me, I have to find ways to get to that point.”

Maybe he still has some rough edges, but Jackson’s teammates aren’t sure anyone could play the position better than he did Sunday.

“Man, I was so excited for him,” fellow safety Justin Simmons said. “I think the coolest thing for me, though, was kind of getting a front-row seat to it. Not necessarily like a spectator, I was out there in the trenches with him, I mean he was locked in. A lot of the times during the game we’ll have moments on the sideline where we’re kind of talking and hanging out almost a little bit, but that game he was locked in.

“From the sideline, coming out, coaching the D-line, coaching the linebackers, coaching the secondary … He was just in a whole other zone and you could tell through his play. Every single series he made a big play for us, so he’s great.”

Simmons said Jackson’s tone-setting hit on DeAndre Hopkins was a thing of beauty.

“We were in basically a zone coverage and when (Deshaun) Watson rolled out and he was getting ready to scramble and maybe even run, he saw what he thought was an open Hopkins and Kareem baited him really well and he threw it right to him. And man, that hit was crazy, it was awesome. Nice, clean hit.”

“His focus, his timing, his feel for time, distance and space was just in a zone,” Donatell said. “That seldom happens, but he reached that in this ballgame. And it was evident in his tackling. He made all clean tackles, they were on point, he was sideline to sideline.

“And our whole team fed on it, our defense, and I think it spilled over into the offense.”

Notes: Turns out Von Miller’s timing was impeccable after all. His sack of Watson was wiped out last week when officials ruled him offside. But he actually timed it just right, according to the video. “I should have seven sacks right now,” Miller cracked. “They robbed me.”