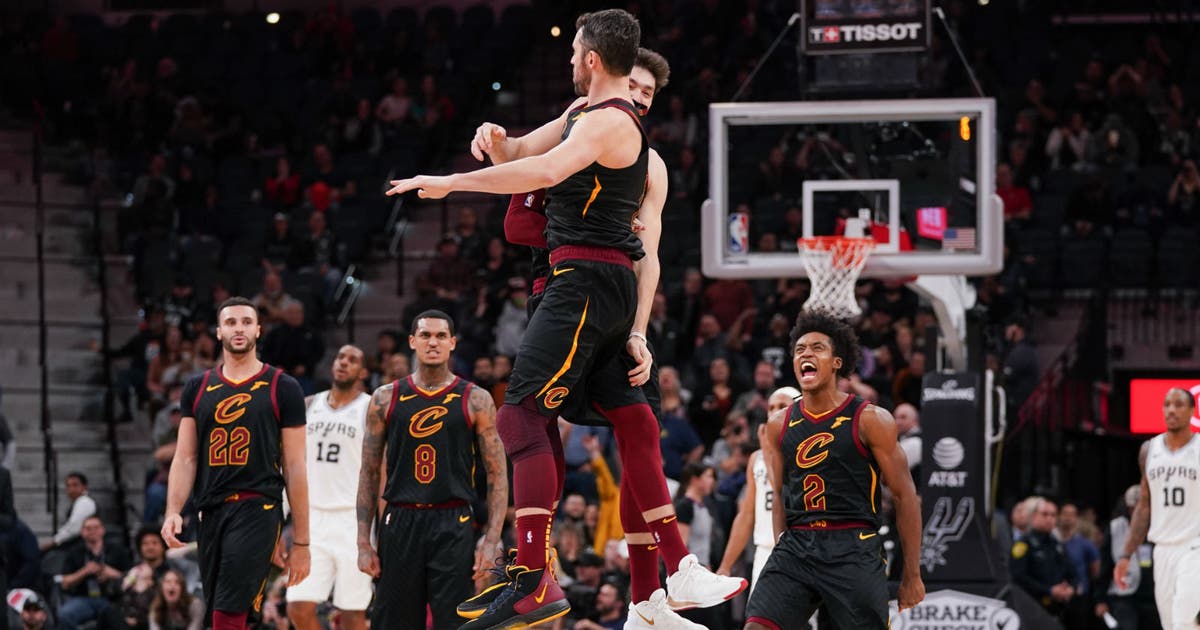 SAN ANTONIO (AP) — Kevin Love hit a tying 3-pointer in the final seconds of regulation and finished with 30 points and 17 rebounds as the Cleveland Cavaliers rallied past the San Antonio Spurs 117-109 in overtime Thursday night to stop an eight-game losing streak.

Love had 10 points in the fourth quarter and OT to help Cleveland win for the first time since Nov. 23 against Portland.

It was San Antonio’s third straight overtime game. The Spurs won the previous two but failed to maintain a five-point lead with 20 seconds left in the fourth quarter this time.

DeMar DeRozan had 21 points but missed a pair of free throws with 14 seconds remaining in regulation and the Spurs leading 103-100. Love tied the game at 103 on a 3 with 7.5 seconds to go.

DeRozan missed a 20-foot fadeaway jumper at the close of regulation.

Cleveland opened overtime on an 8-4 run, including back-to-back 3s by Love and Cedi Osman, to capture just its second road win of the season.

The Spurs outscored the Cavs 35-22 in the fourth period after trailing by 13 in the third.

Consecutive layups by DeRozan put San Antonio up 84-83 with 6:23 remaining. It was the Spurs’ first lead since Rudy Gay’s 3-pointer put them ahead 7-6 with 8:19 left in the first quarter.

Cleveland lost four of its previous five games by 20-plus points but dominated for three quarters. The Cavaliers built a 10-point lead in the second while shooting 47% from the field.

Sexton drained a 3 after the Spurs closed to 72-68 with 1:21 left in the third. Cleveland rebuilt a 10-point lead entering the fourth.

Cavaliers: Their previous victory against the Spurs was March 12, 2015, in San Antonio. … Dylan Windler missed the game with a lower left leg stress reaction. Windler is the only injured player on the roster.

Spurs: Assistant coach Tim Duncan missed the game due to illness. Assistant coach Mitch Johnson took Duncan’s spot on the front row of the bench alongside San Antonio head coach Gregg Popovich and assistants Becky Hammon and Will Hardy. … DeRozan was assessed a technical foul at the close of the first half for chucking the ball high over the backboard from the opposite lane. DeRozan appeared frustrated after the Cavaliers scored with 1.1 seconds left in the second quarter after rebounding a missed 3-pointer.

Cavaliers: At the Milwaukee Bucks on Saturday night.