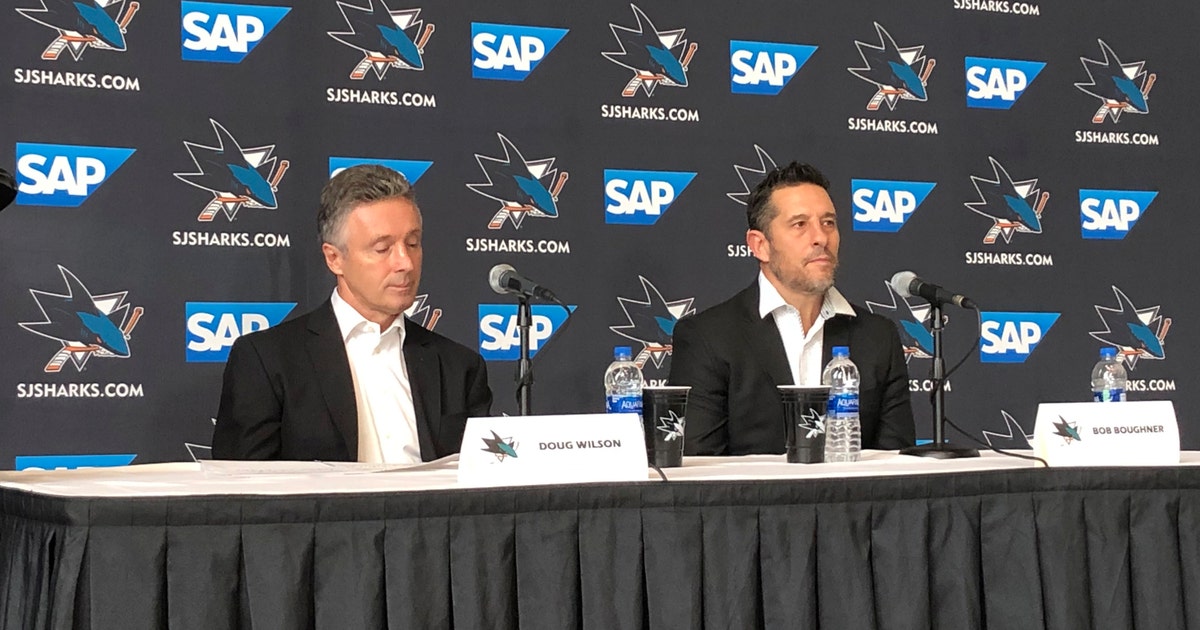 SAN JOSE, Calif. (AP) — Flying back home from a winless road trip, general manager Doug Wilson could feel the same lack of energy and excitement that had plagued the San Jose Sharks on the ice too often this season.

So soon after the team landed, Wilson decided to do something he hadn’t done in more than 16 years as general manager in San Jose: make a midseason coaching change.

“It’s something that was just lingering, there was a little something that just wasn’t quite right,” Wilson said Thursday. “My job is to find solutions and how can we get that juice and energy and joy. When you get that feeling, it’s contagious, you put games together. But when you’re trying to scratch and claw and stay in the game, that’s sometimes when things are missing.”

Too much has been missing this season for the Sharks, who have been unable to build on last season’s trip to the Western Conference Final. San Jose lost the first four games of the season and now is mired in its second five-game skid despite entering the season with high expectations following the re-signing of defenseman Erik Karlsson in the offseason.

With the team five points out of a playoff spot and with the fourth fewest points in the conference, Wilson is turning the roster over to interim coach Bob Boughner and a whole new cast of assistants.

San Jose also fired assistants Steve Spott, Dave Barr and Johan Hedberg along with DeBoer. Roy Sommer will move from being head coach in the AHL to associate coach under Boughner. Mike Ricci also has been hired as an assistant and Evgeni Nabokov will be the team’s new goaltending coach.

The new staff got its start Thursday with a home game against the New York Rangers, hoping to improve poor play in the defensive zone and spark an offensive attack that has struggled too often this season.

“There’s a lot of different ways you can approach things,” Boughner said. “We are going to have a different look offensively. We’re a team that I remember a few years ago when I was here that outshot you and attacked you, put you under pressure all night. It came off the forecheck, our O-zone play. We jumped on teams, we never let them have a breath. Right now there’s not enough of that. We’ve got to get back to that attack mode and get more bodies in front of the net and more pucks to the net and those kind of things.”

Wilson pointed to a series of numbers to show the struggles of a team that is 15-16-2. The Sharks have allowed the most quality scoring chances from the slot, generated the fewest, committed the most penalties, have the third-worst goal differential and the fourth-worst save percentage. About the only positive is San Jose’s No. 1 ranked penalty kill unit.

“These are just numbers, they’re facts,” Wilson said. “It’s quality data. You can see it, you can feel it and then creating offense, too. Those two areas of the ice are the most important areas on the ice and if you really want to know about a good hockey team and goal differential. The PK can sometimes hide other things but if you’re a really good PK team you should be able to defend at 5 on 5 with the same mindset.”

Boughner spent two seasons with the Sharks, including the Stanley Cup run, before leaving for the head coaching job in Florida. He had an 80-62-22 record in two years as coach with the Panthers before being fired after last season and brought back to San Jose as an assistant again.

Now he gets a second shot as a head coach with Wilson hoping a new voice will provide a spark for a roster that hasn’t gotten enough production from younger players and consistent enough play from veterans.

“Sometimes bringing coaches in does that,” Wilson said. “Other teams have seen that. It doesn’t make my happy that that might be what was needed. But it’s not like Pete or anybody did anything wrong. It’s sometimes maybe that jolt. We all should look in the mirror and take responsibility when we’re not playing well or performing well.”

DeBoer was 198-129-34 in four-plus seasons in San Jose. He led the Sharks to their only Stanley Cup Final appearance in franchise history in his first year in 2016. San Jose made the playoffs again the following three years under DeBoer, losing to eventual champion St. Louis in last season’s conference final in six games. San Jose’s six playoff series wins in four seasons under DeBoer were the most for the franchise in any four-year stretch.