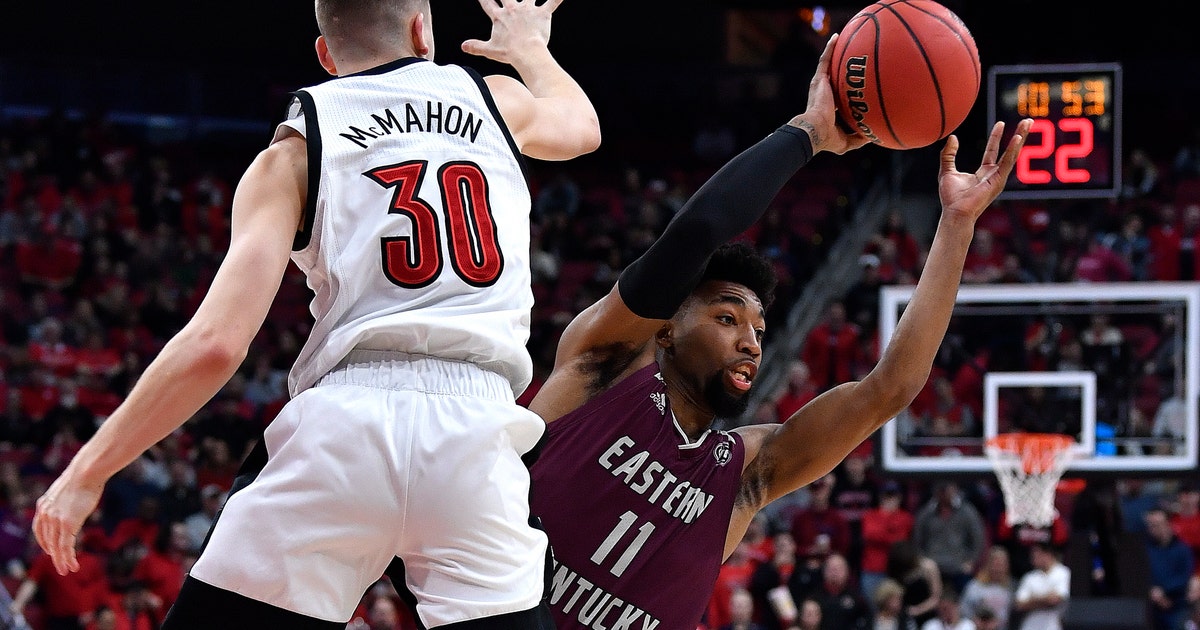 After taking their first loss Tuesday against Texas Tech in the Jimmy V Classic behind 34% shooting, the Cardinals (10-1) responded with baskets from all over the floor. They made 34 of 54 from the field, including 9 of 19 from long range.

Enoch made his first seven attempts and grabbed six rebounds as Louisville controlled the Colonels (3-7) 35-24 on the boards. Malik Williams made a pair of 3s for 11 points with six rebounds.

Ty Taylor had 13 points, Tre King 12 and Jacquess Hobbs and Jomaru Brown nine each for EKU.

Marcus Garrett added 13 points for the Jayhawks (9-1), who shrugged off a slow start to beat their neighbors from down Interstate 70 for the eighth time in as many meetings. Kansas led 43-24 at halftime, built on the advantage early in the second half and never looked back as it gazes toward a potential No. 1 ranking Monday.

Javan White and Marvin Nesbitt Jr. scored 12 apiece for the Roos (5-7), who committed 22 turnovers and struggled all night with the Jayhawks’ length.

In a stellar matchup of senior point guards, Pritchard was just a little bit better, repeatedly driving past Michigan’s Zavier Simpson toward the end of the second half and in overtime. Simpson had eight points and 11 assists, but the Wolverines (8-3) lost their second straight game.

Oregon (8-2) built a 16-point lead in the first half, then had to withstand an extended Michigan charge. Anthony Mathis nearly won it for the Ducks with a long 3-pointer at the end of regulation, but a replay showed he released the shot just after the clock ran out.

The Wildcats (8-1) won their sixth straight game going into a two-game trip to Las Vegas ahead of their Christmas break.

Hagans scored eight of Kentucky’s first 11 points and led the Wildcats with 11 points in the first half. Hagans finished with seven assists and seven rebounds. Immanuel Quickley tied a career high with 16 points, Nick Richards scored 12 and Keion Brooks Jr. contributed 10 points off the bench.

The teams struggled to generate offense early, but the Tigers used physical defense, feeding into transition buckets, to create separation in the second half.

Auburn failed to find a rhythm in the first half, shooting just 33% from the field and 4 of 10 from the free-throw line, but shot 50% from 3-point territory in the second half.

KNOXVILLE, Tenn. (AP) — Damion Baugh sank a 3-pointer with 1:43 remaining to put Memphis ahead for good and the Tigers outlasted Tennessee to snap the Volunteers’ 31-game home winning streak.

Tennessee (7-2) had owned the longest active home winning streak of any Division I team. The Vols hadn’t lost at home since falling to Auburn 94-84 on Jan. 2, 2018.

D.J. Jeffries and Tyler Harris each scored 11 points and Baugh added 10 for Memphis, which found a way to win despite scoring just five points in the game’s first 12 minutes.

Henry was the only Spartan to reach double figures as Michigan State (7-3) struggled to hit shots in an NBA arena.

Xavier Hill-Mais led Oakland (5-6) with 10 points. The Golden Grizzlies, who have come close to upsetting their in-state rivals with 3-point shooting in the past, shot just 26%, including 31% on 3-pointers.

INDIANAPOLIS (AP) — Bryce Golden scored 12 points on 4-of-5 shooting to lead Butler’s balanced scoring attack in a romp over Southern.

Also cracking double figures for the Bulldogs (10-1) were Sean McDermott with 11 points on 3-of-5 3-point shooting and Khalif Battle with 10. Twelve Bulldogs played and 11 scored.

NEWARK, N.J. (AP) — Jermaine Samuels scored 13 of his 18 points in the second half and Villanova won its season-high fourth straight game by holding off Delaware in the Never Forget Tribute Classic at the Prudential Center.

PISCATAWAY, N.J. (AP) — Seton Hall star Myles Powell sat out the second half with a head injury, and Rutgers’ Ron Harper Jr. had 18 points and six rebounds to help the Scarlet Knights beat the Pirates 68-48 in the Garden State Hardwood Classic.

Powell did not return to the Seton Hall bench in the second half. Sixth in the country at 22.9 points per game, Powell didn’t score his first points until nearly 10 minutes into the game. He finished with six points on 3-of-9 shooting.

Harper won the Joe Calabrese Award — named in honor of the late journalist who covered the rivalry for 38 years — as the most valuable player. He had two early alley-oop dunks. Akwasi Yeboah added 14 points and seven rebounds for Rutgers (8-3).

Quincy McKnight led Seton Hall (6-4) with 11 points. They have lost two in a row.

Xavier (9-2), which trailed the entire second half, had a chance to win in the final seconds, but Quentin Goodin’s 3-point attempt bounced off the rim as time expired.

Wake Forest (6-5) led by 13 points in the second half. But Childress missed the first of two free-throw attempts to give the Musketeers a final shot for a win.