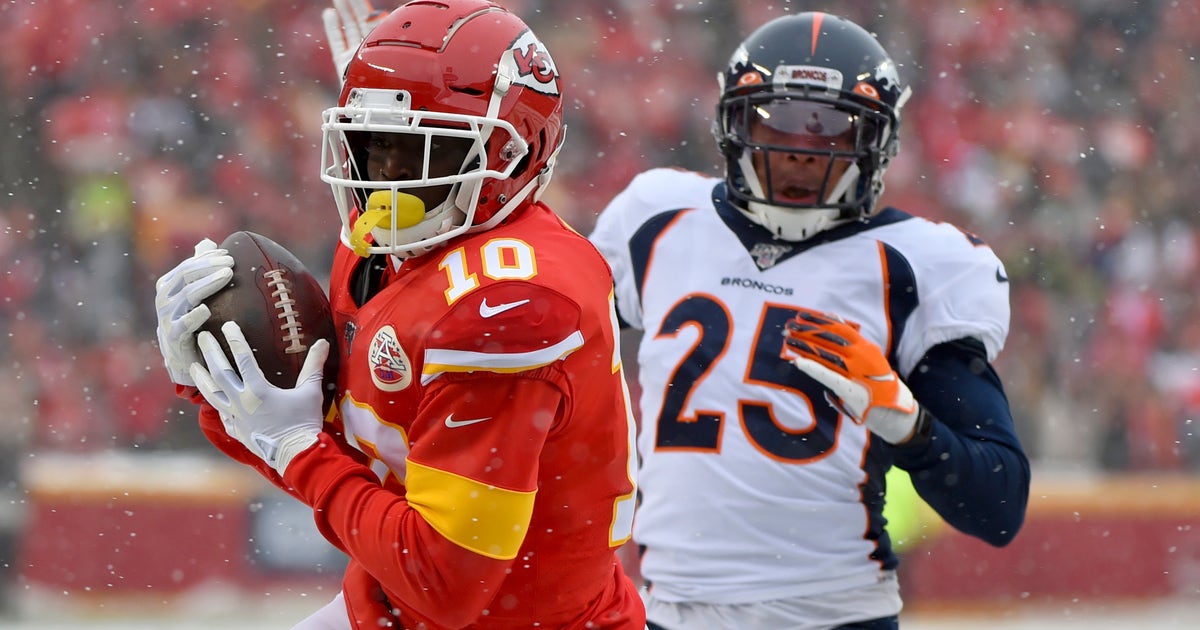 KANSAS CITY, Mo. — The Kansas City Chiefs turned Arrowhead Stadium into their own winter wonderland Sunday, mushing through the snow to an easy victory over the Denver Broncos as they march toward another postseason filled with possibilities.

Patrick Mahomes threw for 340 yards and two touchdowns, and Tyreek Hill and Travis Kelce were on the receiving end of many of his biggest throws, as the AFC West champions romped to a 23-3 victory over the rebuilding Broncos to remain in the hunt for the No. 2 playoff seed and a potential first-round bye.

“It was awesome. A lot of fun,” said Mahomes, who showed no lingering effects from the bruised hand he sustained last week. “The guys were embracing it. We knew it was going to snow. We practice in cold weather a lot. So you get there, you’re already accustomed to it, and you go out there and play.”

Like a bunch of kids getting a snow day from school, the Chiefs enjoyed every minute of it.

Hill caught five passes for 67 yards and both scores, and Kelce hauled in 11 catches for 142 yards to become the first tight end in NFL history with four consecutive 1,000-yard receiving seasons, helping the Chiefs (10-4) beat the Broncos for the ninth straight time. Denver (5-9) hasn’t won in Kansas City since Sept. 17, 2015.

The Chiefs outscored their longtime division rival 53-9 this season.

Whether it was the weather or the suddenly stout Chiefs defense, the Broncos were so inept offensively that Kelce had more yards receiving at the start of the fourth quarter than they had total offense (139 yards). Phillip Lindsay was bottled up on the ground, and former Missouri standout Drew Lock — who grew up in the Kansas City suburb of Lee’s Summit, Missouri — spent most of the day seeing red jerseys bearing down on him.

The rookie quarterback was 18 of 40 for 208 yards and an egregious interception in the end zone.

“I think he handled the conditions well. I think it’s a game under these conditions that he can bank and learn from,” said Broncos coach Vic Fangio, whose team was eliminated from playoff contention for the fourth straight season. “I didn’t see him get flustered out there and frustrated so that part was good.”

That was about the only good part. The Broncos finished with 251 yards, went 5 of 14 on third down and 1 of 3 on fourth, and were penalized seven times for 72 yards. They also went 0 for 2 in the red zone.

“When you play a team as good as the Chiefs,” Fangio said, “you can’t do that.”

Flurries began to fall overnight, far earlier than meteorologists had predicted, and the intensifying snow caused major problems for people trying to get to the stadium. There were spin-outs and car accidents throughout the metro area, and there was some concern that players might be delayed in getting to the stadium in time for warmups.

An hour before kickoff, dozens of workers were clearing off the yard lines, end zones and sidelines as the snow swirled inside the stadium. It really began to pick up again at halftime, obscuring Kauffman Stadium about a quarter mile away, and stadium workers flooded the field to clear what they could during every timeout.

It wasn’t long until Andy Williams’ sonorous voice over the loudspeakers made the snow globe atmosphere complete.

And for the Chiefs, it seemed indeed like the most wonderful time of the year.

They effortlessly marched downfield for a touchdown on their opening drive, then got a trio of field goals from Harrison Butker on their next three first-half possessions to build a 12-3 lead. When they received the kickoff to start the second half, Mahomes took them right downfield again, finding Hill for their second TD connection of the game.

The Broncos didn’t force a punt until there was about six minutes left in the third quarter.

By that point, the game was pretty much over.

The biggest cheers the rest of the way were for the Cincinnati Bengals, who were trying to knock off the New England Patriots. They couldn’t hold an early lead, though, and that left the Chiefs needing to win out and the Patriots to drop one of their final two games to move ahead of them in the playoff pecking order.

“That was very fun,” said Hill, who left the game after a couple of hard hits but returned to finish it out. “This is my first snow game and I had a blast with it. I don’t want to do it again because it’s very cold, but I had fun with it.”

Lindsay had 32 yards rushing and the Broncos finished with 52 as a team. … Broncos LB Von Miller had the 105th sack of his career. He needs one more to move into the top 25 in NFL history. … The Chiefs have held four straight opponents to 20 points or fewer and two of the past three to 10 points or fewer.

Chiefs: DE Alex Okafor hurt his chest while sacking Lock in the first half and did not return. … RB Damien Williams (ribs) and CBs Morris Claiborne (shoulder) and Rashad Fenton (hamstring) were inactive.

Denver begins a season-ending two-game homestand against Detroit next Sunday.