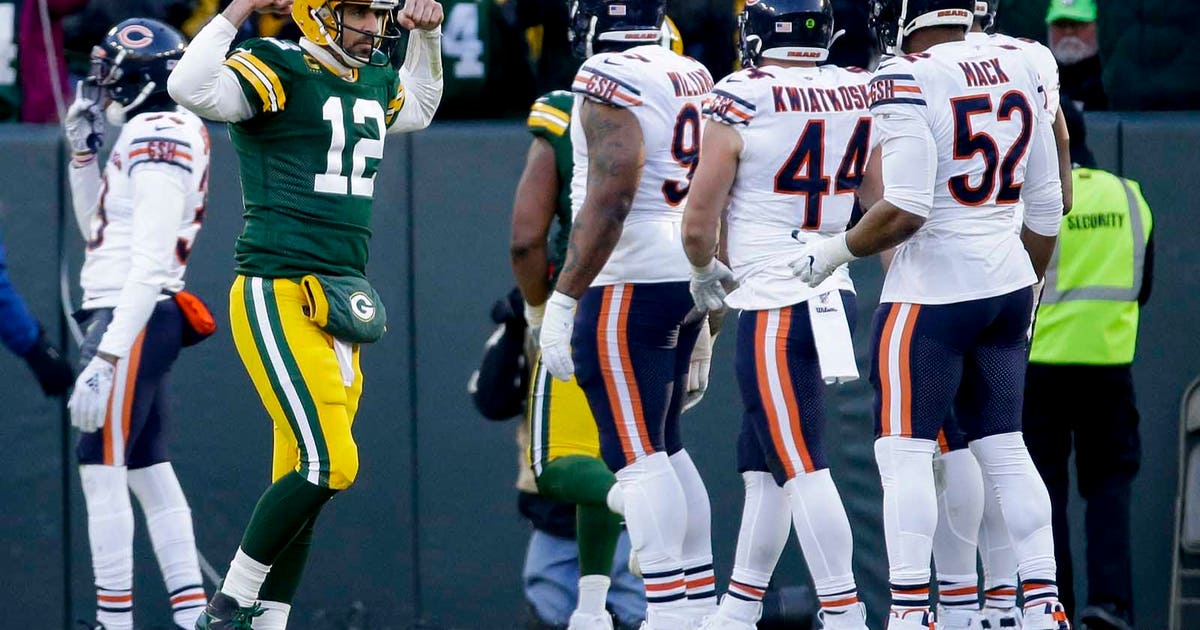 The equation for beating the Chicago Bears is simple: Force Mitchell Trubisky to throw the football.

Green Bay accomplished that Sunday afternoon, shutting down the Bears’ rushing attack and doing just enough to get out to a two-possession lead in the third quarter to make Chicago play from behind.

Trubisky attempted 53 passes, completing a mere 29 for 334 yards, one touchdown and two interceptions, adding up to an abysmal 64.5 passer rating.

The Packers’ defense did its job. But big questions still loom on the offensive side of the ball, even after the team’s playoff-clinching 21-13 win.

Is Aaron Rodgers showing his age or is it just the offense not doing enough to help the star quarterback? Either way, something isn’t clicking. Rodgers completed 16 of 33 pass attempts for 203 yards and a score, but yet again the unit turned back to running back Aaron Jones to supply the points.

Green Bay scored on its opening two possessions in the second half on Jones’ touchdown scampers, only to punt the next five times it had the ball.

The offensive display we witnessed Sunday is concerning. However, the Packers still exited their final regular-season home game with their 11th win of the season, continuing their dominance in the league’s oldest rivalry.

PLAYER OF THE GAME

Chicago linebacker Khalil Mack was the defensive player to get all the pregame hype Sunday, but it was Packers tackle Kenny Clark who produced the big plays. Clark tallied eight tackles, two sacks, three tackles for loss and one quarterback hurry. His biggest play was the sack of Trubisky on third-and-4 from Green Bay’s 32-yard line in the third quarter, forcing a fourth-and-long, and eventually a Bears turnover on downs.

After going without a sack in 10 consecutive weeks, Clark has now posted 3.5 sacks the past two games combined.

DON’T FORGET ABOUT ME

Jake Kumerow was on the field for all of 11 offensive snaps. He made the most of them. Rodgers targeted the UW-Whitewater product once and Kumerow hauled it in on a third-and-4 for a 49-yard gain in the third quarter to keep the chains moving, making three Bears defenders look silly in the process.

Instead of opting for a Hail Mary for the final play of the game, Chicago, trailing by eight points, tried the playground method of lateraling the ball down the field. It almost worked. The Bears somehow brought the ball inside the 10-yard line, but tight end Jesper Horsted couldn’t pitch it to a wide-open Allen Robinson down the sideline. That would’ve been trouble.

THIS WAS ALMOST INSANITY ?? pic.twitter.com/YXLFQjZfkS

25 — Green Bay has scored less than 25 points in four of its last five games, the exception being the 31-13 win over the New York Giants on Dec. 1 when Rodgers tossed four touchdown passes against New York’s 26th-ranked passing defense. The Packers rank 22nd in total offense and 14th in points scored per game (23.6).

One thing Green Bay does well is take care of the football. After turning Chicago over three times and not coughing it up once Sunday, the Packers slot in at second with a plus-14 turnover ratio.

“I love being 11-3. I think the performance was a little up-and-down, but I thought we did some really good things. We just got to be a bit more opportunistic when we have opportunities.” — quarterback Aaron Rodgers

“I don’t know if we have the full respect of the entire league at this point, based on some of our performances where we got beat by a couple scores. But we’re 7-1 at home. We have an inside track at the 2-seed. I like our chances; I like our football team.” — Rodgers

Green Bay’s tour around the NFC North continues with the biggest game of the season: A trip to Minneapolis. The Packers will take a one-game lead into the matchup, but Minnesota is red-hot having won four of its last five games and is coming off a 39-10 victory over the Los Angeles Chargers. It is worth mentioning that star running back Dalvin Cook left Sunday’s game with an injured shoulder and his status is unclear for next week.