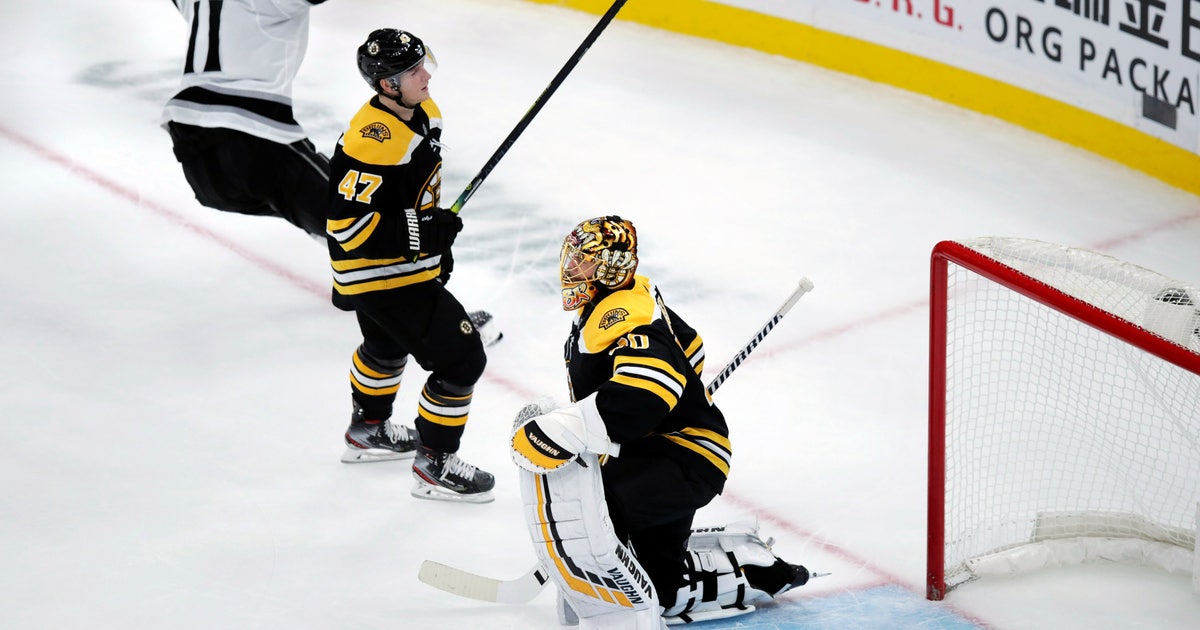 BOSTON (AP) — Anze Kopitar scored at 3:23 of overtime and the Los Angeles Kings rallied to beat the Boston Bruins 4-3 on Tuesday night.

Kopitar beat Tuukka Rask with a high wrist shot after Jonathan Quick had come up with a huge save at the other end, giving the Kings their fourth win in five games and extending their best stretch of the season (4-0-1).

Blake Lizotte had a goal and an assist for the Kings, who couldn’t hold on to leads of 1-0 and 2-1 before rallying for a thrilling finish. Down 3-2 late in the third, the Kings pulled Quick for an extra skater and tied it on Matt Roy’s slap shot with 2:01 left in regulation.

Danton Heinen had a goal and assist, and Patrice Bergeron and Brandon Carlo also scored for Boston, which fell to 1-5-1 in its last six and has lost two straight at home. Rask had 23 saves.

Cirelli split two defenders near the blue line and lifted a shot past Marcus Hogberg.

Frederik Gauthier had a goal and an assist, and Dmytro Timashov and Ilya Mikheyev also scored for the Maple Leafs. Frederik Andersen stopped 27 shots and Tyson Barrie had two assists.

Matthews became the second player in franchise history to score at least 20 goals in each of his first four NHL seasons, joining Dave Keon, who did it in six straight from 1960-66.

Rasmus Dahlin and Jack Eichel had a goal and an assist each, and Kyle Okposo scored for Buffalo. Victor Olofsson added two assists, and Linus Ullmark finished with 28 saves for the Sabres.

UNIONDALE, N.Y. (AP) — Nick Bonino had the tiebreaking goal late in the second period as Nashville got seven consecutive scores to rally for its second win in two nights.

Craig Smith had two goals and an assist, Filip Forsberg, Calle Jarnkrok, Roman Josi and Ryan Johansen each had a goal and an assist, and Rocco Grimaldi also scored to help the Predators win for the fourth time in six games. Pekka Rinne stopped 27 shots.

Brock Nelson, Derrick Brassard and Casey Cizikas scored in a 5:16 span of the second period to give the Islanders a 3-1 lead. However, it was all Predators after that. Thomas Greiss gave up five goals on 15 shots through two periods, and Semyon Varlamov stopped six of the nine shots he faced in the third.

The Flyers played their first home game since Lindblom was diagnosed with Ewing’s sarcoma, a cancerous tumor that grows in the bones or in the tissue around bones. The 23-year-old from Sweden, who is out for the season, stopped by the locker room during morning skate and visited his teammates.

The Flyers warmed up in purple “Hockey Fights Cancer” jerseys and will auction them off with proceeds going to Ewing’s sarcoma research. They left “I Fight For Oskar” signs on every seat, and fans held them during a tribute video for Lindblom. Ducks and Flyers players tapped their sticks and fans stood and applauded the promising forward who had 11 goals and 18 points in 30 games this season. Philadelphia sold #OskarStrong purple shirts, and proceeds from the 50/50 raffle were donated toward Ewing’s sarcoma research.

Carter Hart had 40 saves for the Flyers, and Sean Couturier added an empty-netter in the final seconds.

Rickard Rakell made it 2-1 in the second with his 10th goal for Anaheim. John Gibson finished with 27 saves.

Lucas Wallmark also scored for Carolina, Dougie Hamilton contributed three assists, and Nino Niederreiter added two. Petr Mrazek made 30 saves for the Hurricanes, who are 3-0-1 during a five-game trip that ends Thursday in Colorado.

Jack Roslovic, Patrik Laine and Mark Scheifele scored for the Jets, who had won five straight at home. Connor Hellebuyck stopped 18 shots for Winnipeg before Laurent Brossoit replaced him to start the third period with Carolina ahead 5-2. Brossoit made four saves.