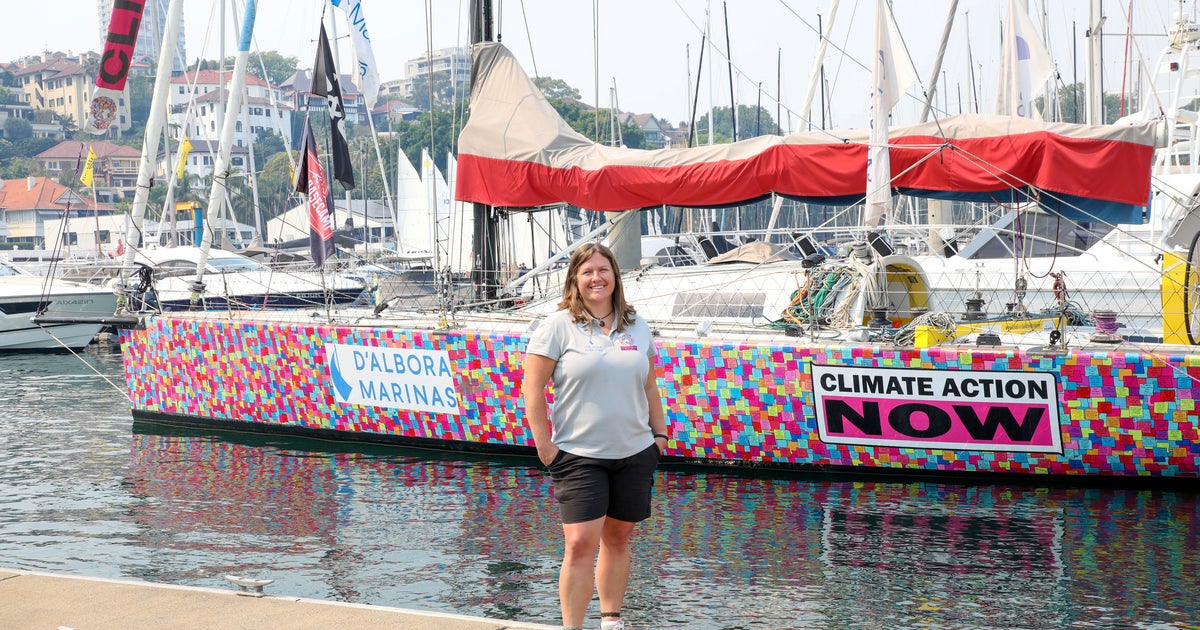 Lisa Blair thought nature had thrown just about everything at her as she sailed the high seas.

That was until, somewhere between Australia and Indonesia, “I saw a kitchen sink float past.”

She’s been angered by the sheer volume of plastic and debris she’s seen in the ocean at other times while standing watch, or at the helm.

“At one point, in the middle of the Southern Ocean, with no land anywhere close by, the nearest piece of humanity was about 3,000 nautical miles away, there was a Styrofoam box floating past with a bird sitting on it,” she added. “This is like one of the most raw, untouched environments on the planet, and there’s rubbish.”

Raising more awareness of environmental issues and encouraging more women to get into sailing will be two of Blair’s main goals when she joins Jackie Parry aboard the d’Albora Climate Action Now to be the first all-female, two-person team to race in the 49th edition of the Melbourne to Hobart yacht race.

The race starts Dec. 27, the day after the traditional Boxing Day start of the annual Sydney to Hobart blue water classic.

“It was really heartbreaking to see that,” Blair said of the pollution. “I wanted to utilize the platform that I’d get through my sailing to encourage people to make positive change. Inspire the next generation to think about what we can do as individuals.”

The 680-mile Sydney-Hobart tracks down the east coast of Australia and the southern island state of Tasmania. The 435-mile Melbourne-Hobart goes down the west coast of Tasmania, dips into the Southern Ocean, before winding back up to the finish in the Derwent River. Both races are supposed to finish at the same place, at about the same time.

The racing is important, of course — Blair is competitive — but she’s aiming to use the sailing profile over Australia’s holiday period to highlight her causes. To do that, she literally plasters the hull of her yacht with the messages.

Blair bought her 50-foot yacht and renamed it Climate Action Now in 2015, and “for every event I’ve done since I’ve carried that banner.”

She hosts events at marinas in places such as Sydney and Melbourne where she invites people onto her boat to contribute to her campaign.

“I ask people to complete a post-it note message on an environmental action of something they’re already doing toward a better future,” she said. “I gather those messages up and I turn them into a digital wrap.”

That explains the multi-colored pattern on the boat.

“The hull is brightly colored, all little different squares,”she said. “That’s actually (images of) thousands of different post-it notes from the community. The aim is to showcase what people are already doing toward a better future. And encourage people who aren’t already making a change.”

Blair was a latecomer to sailing, having grown up near the hinterland town of Nambour on Australia’s Sunshine Coast, living on an off-grid property nestled into rain forest.

In her 20s, during university holidays, she got a job as the cook and cleaner on a charter yacht. She ended up doing the Clipper Round the World Yacht Race and after that she was hooked.

“I remember thinking how incredible this was, I’ve just gone and done something I never thought I’d be able to achieve,” she said. “I asked myself the question, what else could I do?

“That led to me trying solo sailing. Then I did a solo race. That led me down this path of taking on these incredible opportunities, incredible records. It’s been an incredible journey.”

Having raced the Sydney-Hobart, she wanted a different challenge to finish 2019.

“The Melbourne to Hobart has a category of double-handed, two people racing my boat across an ocean. It offers another set of challenges,” she said. “It’s luck of the draw which one is more dangerous. A bit of a consensus the west coast yacht race is generally offers … stronger winds, bigger seas than what the Sydney-Hobart offers.”

After spreading her message from Melbourne to Hobart, Blair’s got plenty more on her agenda.

“Much to my mother’s horror, there’s a bit of a list developing,” she said. “I plan on sailing solo around Antarctica again at the end of 2020, then I have my eye on potentially going solo, non-stop and unassisted around the Arctic.

“I’d like to row a row boat around the world — a few projects on the lineup.”