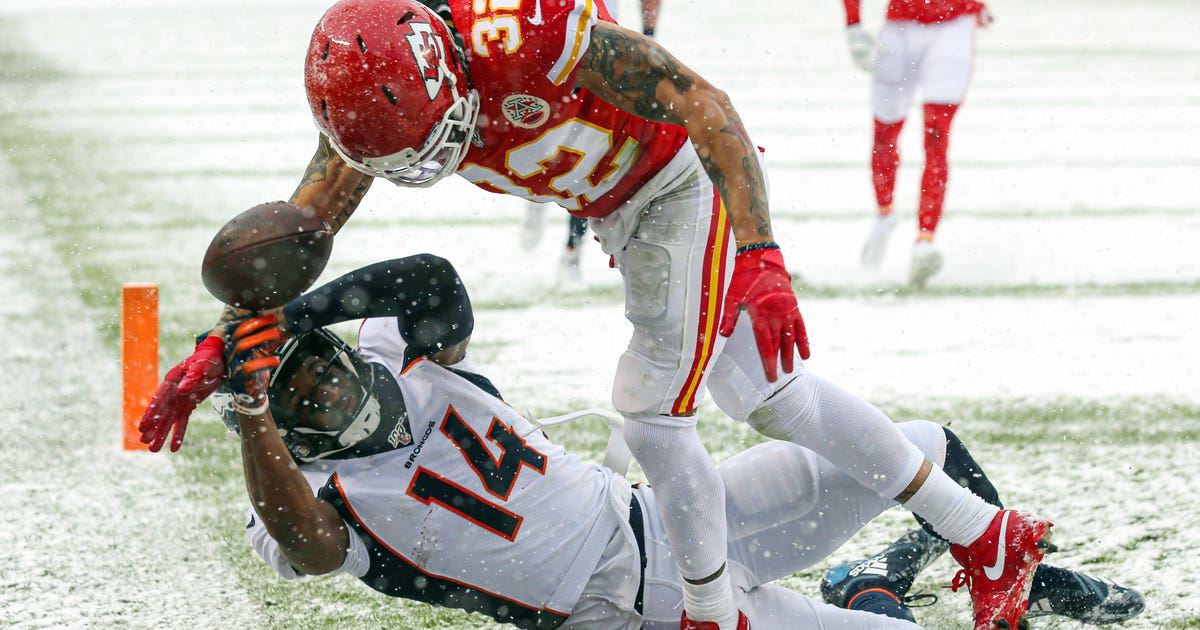 KANSAS CITY, Mo. — Tyrann Mathieu had an interception in the end zone taken away by a penalty, another that he just couldn’t grasp, then one more potential pick that fell just out of his reach and onto the snowy turf of Arrowhead Stadium last Sunday.

By that point, all the Chiefs safety could do was lean back with a smile and begin to make a snow angel.

“You know,” Mathieu said later, “they gave me all that money, it could have bought me some longer arms or something.”

The Chiefs are perfectly happy with what it has bought them so far.

The centerpiece alongside pass rusher Frank Clark of their offseason defensive overhaul, Mathieu has made play after play for the Chiefs as they rolled to a fourth consecutive AFC West title. He is the team’s third-leading tackler, has three picks to tie rookie safety Juan Thornhill for the team lead and even has a couple of sacks on well-timed blitzes.

In other words, he’s been the disruptive force in the secondary that the Chiefs envisioned when they signed him to a three-year, $42 million contract — not to mention the consummate leader for a defense quickly rounding into form.

“It doesn’t necessarily matter who we play or where we play,” Mathieu said. “I think everybody is showing up to work and committing themselves to the process, understanding that we have some time until the actual game, so it is important to get as much information as possible. With that, you kind of begin to build confidence. If anything, I think we’re playing confidently defensively. Very aggressive. That’s what you want at this point of the season.”

It’s also what the Chiefs lacked at this point last season.

While their defense was generally poor the entire way, it didn’t really bite them until the AFC title game, when they continually failed to get Tom Brady and the New England offense off the field. And when the Chiefs lost the coin toss in overtime and watched the Patriots march downfield for the winning touchdown, it was the final straw.

Within a week, the Chiefs had decided to fire longtime coordinator Bob Sutton and jettison a series of veterans — such as safety Eric Berry and linebacker Justin Houston, who had once been linchpins but were no longer productive — and rebuild the unit from the ground up. Steve Spagnuolo was brought in as the new coordinator, and he switched from a 3-4 base to a 4-3 system. General manager Brett Veach began to fill out the roster with players who were a better fit.

The secondary was a particular focus.

The Chiefs for years have struggled to cover downfield, and that’s a disaster waiting to happen in the pass-happy NFL. But by signing Mathieu, drafting Thornhill and bringing in cornerback Bashaud Breeland to work alongside Charvarius Ward and Kendall Fuller, the Chiefs suddenly had a nickel package that could rival just about any in the league.

A young package, too. At 27, Mathieu and Breeland are the elder statesmen of that quintet. Thornhill and Fuller are just 24 and Ward is 23, the same age as some guys playing their final seasons of college football.

They’ve played beyond their years, especially of late. The Chiefs have held five of their past six opponents to 212 yards or fewer in sack-adjusted passing totals, and that includes the past three. The quarterbacks they’re shutting down aren’t run-of-the-mill scrubs, either. They range from veterans such as Kirk Cousins and Philip Rivers to a likely Hall of Fame quarterback in Brady, who managed only 169 yards passing in a 23-16 home loss to the Chiefs two weeks ago.

“I knew from the beginning they were going to be good,” Chiefs quarterback Patrick Mahomes said. “Tyrann, you know how smart he is and how he sits on routes, and you could see Juan popping from the first day he got here. You could see the talent that he had that he could be a special player. And you’re seeing that now as he gets more and more experience.”

That bodes well for the Chiefs (10-4) down the stretch.

They head to Chicago on Sunday, then face the Chargers at Arrowhead Stadium, knowing that a pair of wins coupled with a Patriots loss would give them the No. 2 seed in the playoffs and a first-round bye. It also means they could get another shot against the Patriots at home if both were to reach the AFC championship game.

Those are a lot of “ifs,” of course, but one thing is certain: The Chiefs certainly feel better about their chances of making a crucial defensive stop in the fourth quarter should they advance that far again.

“Ultimately, it is just playing well on first and second down, understanding that we do have some guys up front that can really wreck a game,” Mathieu said. “I think on the back end, we are truly confident in what we can do and in our abilities. We study a lot. A combination of all of those things have really given us some confidence going forward.”