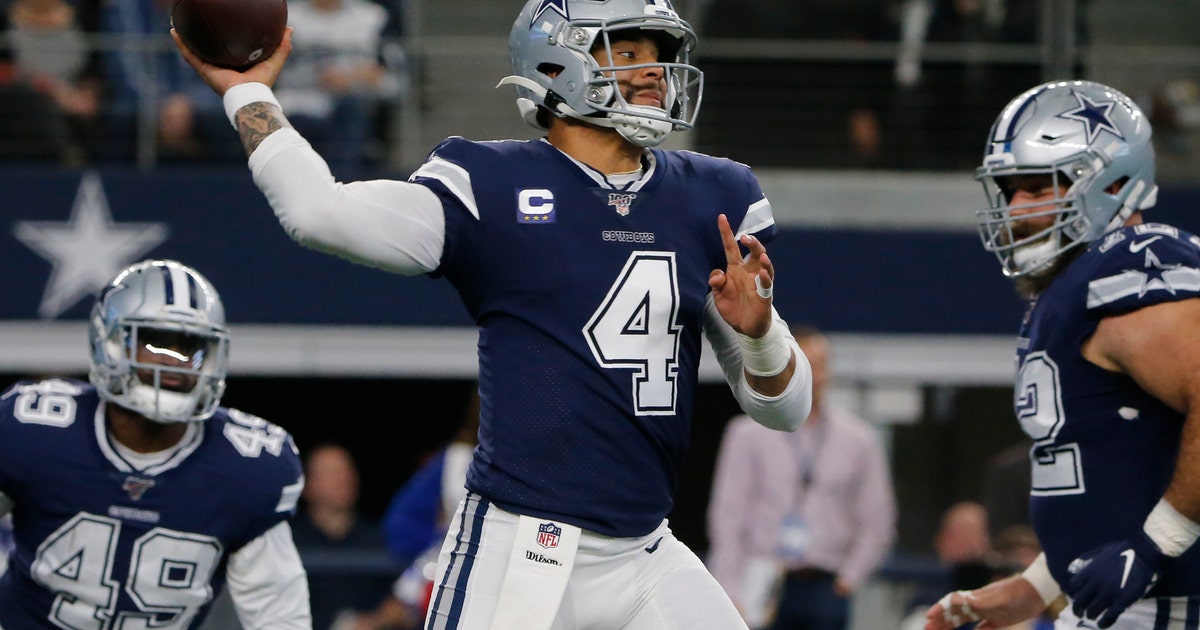 FRISCO, Texas (AP) — Dak Prescott is simply reliving his college days with a shoulder injury that is limiting him in practice for the first time in four seasons as quarterback of the Dallas Cowboys.

As for whether the 2016 NFL Offensive Rookie of the Year will miss his first game as a pro when the Cowboys try to wrap up a playoff spot at Philadelphia.

“I’ll be good to go Sunday,” Prescott said Thursday, a day after coach Jason Garrett revealed that Prescott wouldn’t be throwing in practice to start the week after getting his right shoulder crunched at the end of a run early in Dallas’ 44-21 win over the Los Angeles Rams last week.

Prescott has shown up on the injury report before with minor, nagging issues, but never been forced to yield practice reps to his backup. Cooper Rush did those honors the first two workouts this week.

In Prescott’s mind, something about all this is nagging, too.

And familiar, going back to his days as a Mississippi State standout, before he was the forgotten fourth-round pick who rose to sudden NFL stardom as a rookie when Tony Romo got hurt in 2016.

“I’ve been fortunate I guess in the NFL not dealing with it,” said Prescott, who is second in the NFL in yards passing while leading the NFL’s No. 1 offense.

“But in college, this was a once-every-other-week thing, especially running as much as I did. It’s not anything that I haven’t had before. I know how to handle it and we’re taking the right approach.”

News of the shoulder issue overshadowed Fox television analyst Troy Aikman’s revelation last Sunday that Prescott told him before the Rams game that there was a hairline fracture in his right index finger.

Garrett volunteered the finger injury after it happened against Chicago two weeks ago, but didn’t offer specifics. The coach still didn’t want to discuss details after hearing what was said by Aikman, a former Dallas quarterback.

Neither did Prescott, who has started every game in his career — 65 and counting, playoffs included.

“Not that I know of,” Prescott said when asked if he had a hairline fracture. “I’ve overcome it at this point.”

But did he have one?

“I wasn’t sure if there was one,” said Prescott, who also has been dealing with a sprained left wrist. “Obviously the finger hurts a little bit. It’s another just one of those annoying deals that you just deal with.”

Annoying, nagging, whatever, there hasn’t been much question among Prescott’s teammates over whether he would play.

“Knowing Dak, you’d have to kill him to keep him off the field,” right guard Zack Martin said.

Tight end Jason Witten, back for a 16th season after spending a year in retirement as a broadcaster, went through plenty of weeks with Romo limited or not practicing, particularly late in the career of the club’s all-time passing leader.

This is different simply because Prescott had never missed any practice time. But there’s been no change in Prescott’s presence.

“He’s been reminding us, ‘I’m going to be fine. Here’s what I’m thinking,’” Witten said. “That communication, in the meetings, there’s a team we’re familiar with, but you get in these type of games, those details matter.

“You get banged up a little bit during the week, those are the things you have to do and you have to overemphasize those things when you physically aren’t doing them. That’s exactly the way you draw it up, the way he’s going about it.”

Prescott, who said he hoped to start throwing by Saturday at the latest, was coy about how the injury would be handled, about whether the finger was broken — even about how the equipment staff was planning to protect the shoulder.

“Yeah, we got a great offensive line, got great receivers, running backs,” Prescott said with a smile. “I know my teammates will take pride in keeping me clean. I know that I’ll be smart in the licks that I take.

“But as far as extra stuff, it’s tricky when you’re putting it on your throwing shoulder. I’ll be fine.”

NOTES: LT Tyron Smith has been dealing with a swollen eye that Garrett said was “in the stye family.” Garrett has declined to be more specific. Smith is expected to play. He was limited in practice Thursday after sitting out Wednesday’s workout. … LB Joe Thomas (knee) hasn’t practiced this week, and his availability against the Eagles is in question. … LB Sean Lee (pectoral, thigh injuries) returned to practice Thursday and should play.