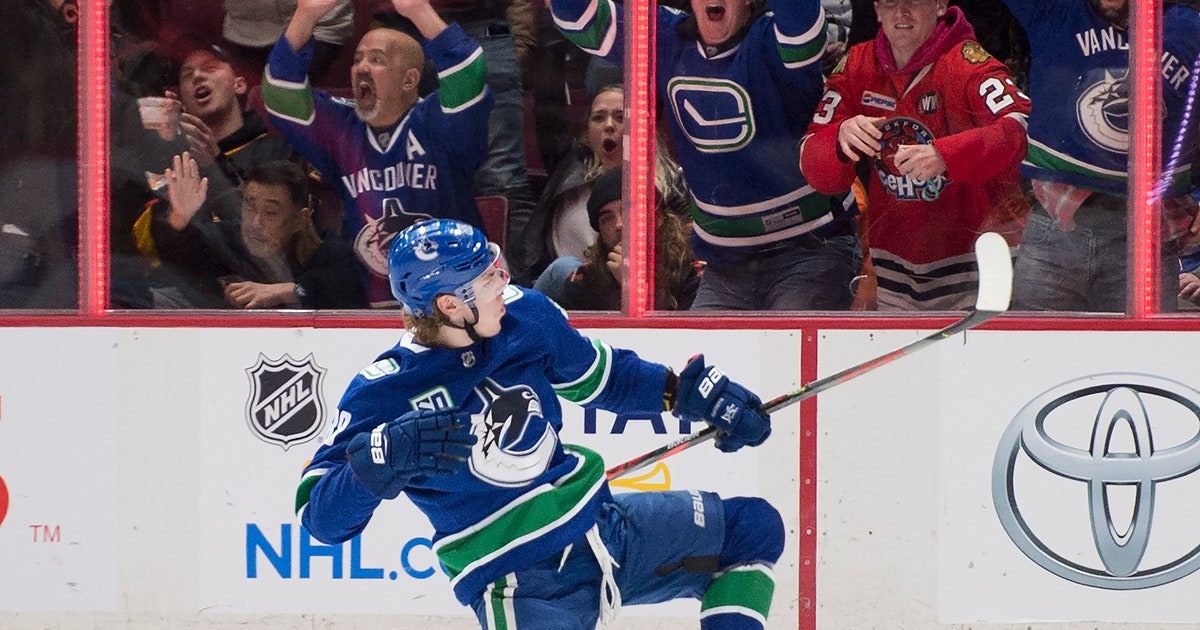 VANCOUVER, British Columbia (AP) — Adam Gaudette scored a third-period goal and the Vancouver Canucks rallied from a two-goal deficit, extending their winning streak to six games with a 7-5 win over the Chicago Blackhawks on Thursday night.

Gaudette took a pass from J.T Miller and scored on a hard shot from between the faceoff circles.

The Canucks killed a penalty late in the game to preserve the win.

Bo Horvat had two goals, including an empty-netter, and an assist. Miller had a goal and three assists, while Elias Pettersson had a goal and two assists for the Canucks (21-15-4).

Tanner Pearson had a goal and an assist and rookie defenseman Quinn Hughes also scored. Pearson has 17 points in the last 16 games.

Patrick Kane scored twice for the Blackhawks (18-18-6), who had their three-game winning streak snapped.

Jonathan Toews had a goal and an assist, and Connor Murphy and David Kampf also scored for the Blackhawks, who are 5-2-0 in their last seven games.

Horvat put the Canucks ahead 5-4 at 8:10 of the third period. He sent a shot at the net from along the boards. Lehner kicked the puck, it hit defenseman Dennis Gilbert and careened into the net. A frustrated Lehner banged his stick on the crossbar.

A wild second period saw the teams combine for six goals. Chicago scored three times in just over four minutes to take a 4-2 lead, but the Canucks battled back to tie the game before the period ended.

Pearson gave Vancouver a 2-1 lead at 2:48, deflecting a fluttering shot by defenseman Alex Edler for his 16th point in as many games.

Kampf tied the game for Chicago at 4:15, using teammate Matthew Highmore as a screen. Kane scored on a power play at 6:25, then Toews made it a two-goal lead at 8:17 on a strange play. The Chicago captain flipped a puck along the boards that hit Hughes on the back and bounced into the net.

Hughes made up for that miscue when he drew the Canucks to within one with a blast from just inside the blue line on a power play at 10:20. Pettersson tied the game again 85 second later, ripping a shot from between the face-off circles.

Miller scored the game’s opening goal at the 5:04 mark of the first period, just seconds after Chicago killed a too-many-men penalty. Horvat took a shot from just inside the blue line that Miller tipped past Lehner for his 15th goal of the season.

Chicago tied the game just under nine minutes later. Canucks defenseman Oscar Fantenberg tried to pass from behind his own net, but the puck was tipped and took a strange bounce. Murphy pounced on the puck and beat a screened Markstrom on the short side.

NOTES: The Canucks last won six consecutive games between Dec. 28, 2016, and Jan. 6, 2017. … Vancouver’s Brandon Sutter skated on his own during the morning skate but missed his sixth game with an upper-body injury. … Kane scored 802 points over the last decade, the most by any NHL player.