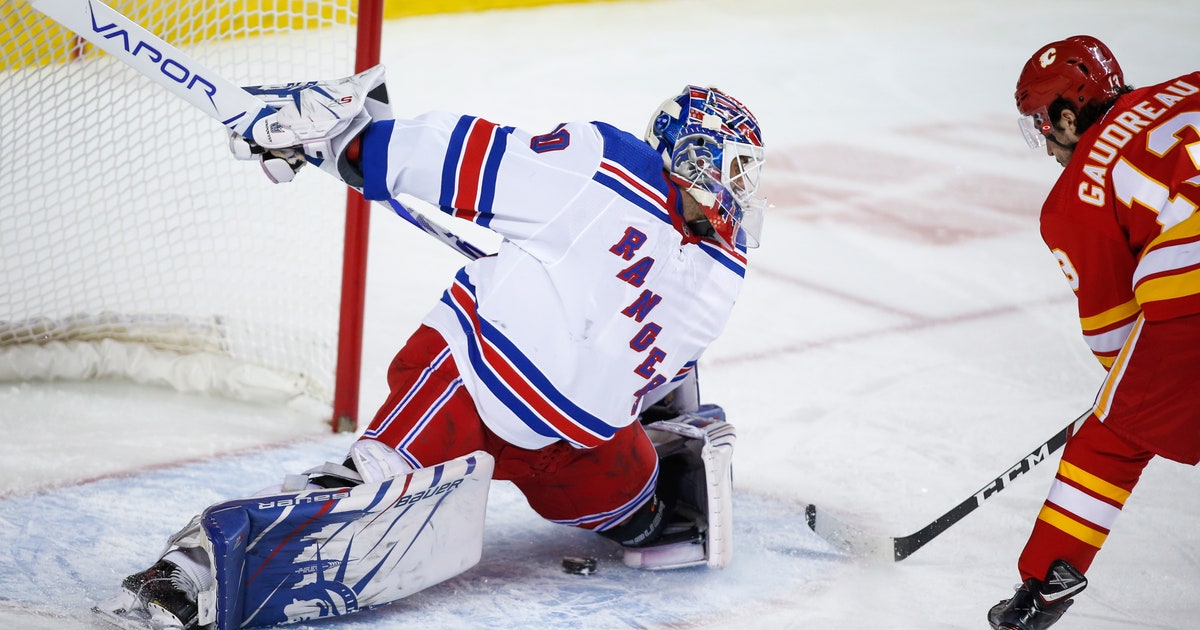 CALGARY, Alberta (AP) — Johnny Gaudreau opened the scoring and then set up the winning goal midway through the second period as the Calgary Flames snapped a five-game losing streak at home with a 4-3 victory over the New York Rangers on Thursday night.

Less than three minutes after New York tied it 3-all, Sean Monahan gave the Flames their third lead at 8:22 of the second when he neatly finished off a pretty tic-tac-toe passing sequence.

Gaudreau fed a pass back to Noah Hanifin at the blue line and he immediately zipped a pass in front to Monahan, who used his quick hands to score his 14th of the season.

Mikael Backlund and Derek Ryan also scored for Calgary (21-17-5), which got a short-handed goal while the Rangers were on a 5-on-3 advantage. Cam Talbot made 24 saves to beat his former team.

New York fell to 1-2-0 on a four-game road trip that wraps up Saturday night in Vancouver.

After getting off to shaky starts, Talbot and Henrik Lundqvist were perfect over the final half of the game. Talbot began his NHL career as Lundqvist’s backup in New York for two seasons.

Beaten on two of the first three shots he faced, Talbot settled in and improved to 4-7-0.

Lundqvist, who gave up three goals on his first nine shots, ended up turning aside 25. His record fell to 9-9-3.

Down 3-2 after the first period, the Rangers tied it at 5:46 of the second on Kakko’s long-range shot through a maze of bodies in front. It appeared Talbot didn’t see the puck.

Calgary regained the lead, 3-2, at 13:18 of the first when Ryan got the puck high in the slot, spun and whipped a shot past Lundqvist.

Coming off consecutive home games in which the Flames fell behind 3-0 in the first period, it was Calgary that got the jump on this night with Gaudreau first to a loose puck in the neutral zone and scoring on a breakaway at 6:48.

The Flames then scored a rare short-handed goal while playing two men short when Backlund intercepted Tony DeAngelo’s cross-ice pass and headed up ice on another breakaway. Backlund beat Lundqvist on a move to his backhand for his sixth goal of the season.

Backlund has three goals in his last six games after ending an 18-game drought.

But with time left still on the two-man advantage, the Rangers went right back to work and answered 26 seconds later with Trouba scoring on New York’s first shot of the game.