The Ministry of Foreign Affairs has said that Nigeria’s High Commission in Accra, Ghana, has not been evicted.

This is according to a communique sent out by spokesman to the ministry, Mr Ferdinand Nwoye.

In his statement dated Friday the 3rd of January, 2020, Mr Nwoye noted that the clarification is pertinent following certain reports suggesting that the Commission in Accra had been violated by the host country.

READ ALSO: Enugu Airport To Be Reopened Before Easter – FG

He stated that the property under reference was in use by the Federal Ministry of Finance since 1957, on leasehold and was later bequeathed to the Ministry of Foreign Affairs.

Mr Nwoye revealed that the lease is said to have expired recently, adding that the High Commission has been exploring the possibilities of renewing the lease agreement with the host authorities.

While explaining that the property is not housing either the residence of the High Commissioner or the Chancery or staff quarters, Mr Nwoye stressed that talks are ongoing the mission and appropriate authorities and assured Nigerians that the ministry is on top of the situation.

Below is the ministry’s full statement regarding the matter. 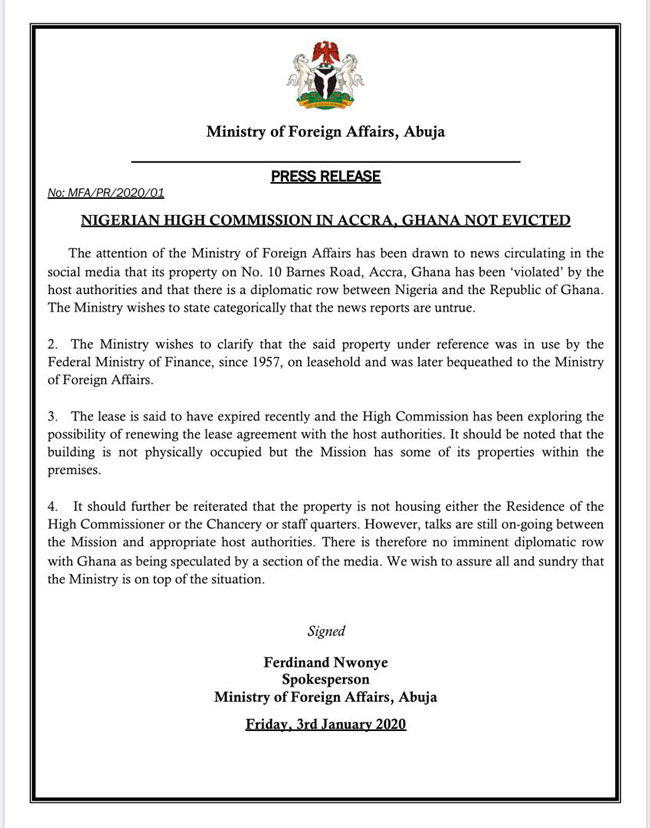 Re-Election: Lagosians Know What They’ll Be Missing If We Don’t Continue, Says Sanwo-Olu