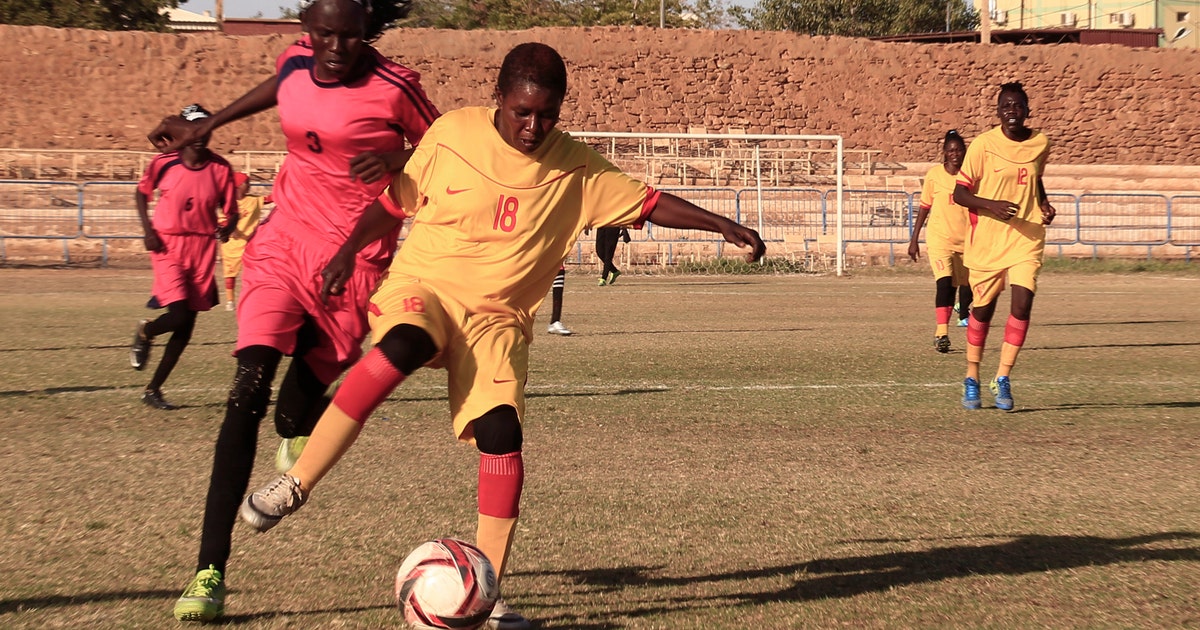 OMDURMAN, Sudan (AP) — All her life, Elham Balatone wanted to play soccer — like her brothers, like the boys on her street. But in the Sudan where she grew up, women could be flogged for wearing pants, let alone soccer shorts. She heard all the reasons why she had to give up her dream. It’s a Muslim country; the uniform is inappropriate; the sport was meant for men.

She played anyway, wearing pants or putting on leggings underneath shorts.

“There’s nothing in this world that I love more than soccer. Please let me play,” she says she told her family. For years, she and other women played largely in the shadows, sometimes on dirt pitches they cleaned themselves, often bouncing from one spot to another.

The women finally took center stage when the world watched them play at a Khartoum stadium as the youth and sports minister and others celebrated Sudan’s new, officially recognized women’s soccer league. Balatone even had her family’s blessings.

But it’s more than just a game. The women’s league became a field of contention as Sudan grapples with the transition from three decades of authoritarian rule that espoused a strict interpretation of Islamic Shariah law and, activists say, disenfranchised women in particular.

Transitional authorities have taken some steps to roll back the legacy of ousted President Omar al-Bashir. In November, they overturned a notorious “public order” law that the prime minister said had been used as a “tool of exploitation, humiliation,” resulting in “atrocities” against women and youth. Rights defenders call it a step in the right direction, but say the fight is far from over.

Some ultraconservatives, however, have been pushing back. Preacher AbdulHay Yousif and others have painted soccer as part of a battle for Sudan’s identity.

“What religion, what Shariah, what manhood would allow a Muslim woman to appear before men … with her arms, legs and some of her thighs exposed and then run before them,” Yousif told worshippers in October, shortly after the league, made up of 20 teams, started.

“By God, these people have not come … for economic development or social prosperity or scientific elevation. They have come to destroy religion and morals.”

He also denounced the youth and sports minister, a woman, saying she “doesn’t believe in what we believe in” and is a follower of “an apostate” — comments that sparked a legal battle between him and the minister.

A pro-Shariah group that backs Yousif urged preachers “to use their pulpits to make the truth victorious and to defend the constants of Shariah … and expose the government’s secularization plots.”

“Clearly this is part of an effort by Yousif to undermine the new government by stimulating a ‘moral panic’ regarding the subversion of gender roles. Partly it’s about his religious views, but it is predominantly a patriarchal form of gender politics,” said Willow Berridge, a lecturer in history at Newcastle University who has written about Sudanese Islamists.

Yousif and his supporters “tend to occupy the most uncompromising end of the religious spectrum in Sudan.”

The preacher’s diatribe has had little direct impact on the league. But Taghreed Awoda, an administrator with one of the teams, al-Difaa, and a feminist, said the showdown was part of a larger fight for change.

“To have a women’s soccer league play in Sudan, this dismantles many of the main pillars underpinning the last regime,” she said.

Under al-Bashir, laws like those restricting attire were inconsistently applied and disproportionately targeted the poor and less educated, as well as anti-regime activists, Awoda said. Women players were generally left alone if they kept a low profile, although one group was once briefly arrested, she said.

Preparations for the league began more than a year ago in line with the objectives of the international soccer federation FIFA, said Mervat Hussein, head of the women’s soccer committee at the Sudan Football Association. The efforts accelerated after al-Bashir’s removal, she said. FIFA, which sets criteria for developing women’s soccer, says member associations have objectives to meet to obtain funding.

Women were at the forefront of the protests that eventually pushed the military to overthrow al-Bashir in April.

Hala Al Karib, regional director of the Strategic Initiative for Women in the Horn of Africa, said this should have translated into more rights, but many laws discriminating against women remain in place even after the public order law was reversed.

She said some hardline Islamists are fighting for their interests after losing clout in al-Bashir’s fall, arguing their rhetoric finds little resonance. Women’s issues usually “get turned into bargaining chips” and risk being sacrificed to appease hardline groups, she said.

In the midst of all the wrangling is the story of women who say they just want to play soccer.

“These are people who have struggled, toiled and have pressed ahead in the face of so many attempts to destroy their talents,” said Amany Anas, a player for al-Tahadi team. “Now the moment has come when they can show people that women could play just like men.”

Al-Difaa player Fatima Gadal said in the past players sometimes used their own money to buy balls and gear. At times, she skipped buying food to afford bus fare to go play. “We were very much so on the margins.”

Some things are still austere. After a recent game in Omdurman, Khartoum’s twin city, the al-Difaa team squeezed into a minibus with cracked windows, rusty interiors and not enough seats. The engine soon quit and team members pushed the bus, cheering when the engine restarted.

The players hope official recognition will now result in more opportunities. Some families asked to enroll their daughters after they saw the league, said Anas.

At the Omdurman game, the players picked up fans — men and women.

“It’s a lovely thing that I hope will continue. I love the courage of the women on the field,” he said. “I pray and I am a believer … and I can see that women are covered up and dressed modestly.”

On the field, most players wear leggings under their shorts, but otherwise are in regular soccer kit, and many don’t cover their hair.

Some are not convinced. After praying at the mosque where Yousif preaches, a woman who gave her name only as Balqis said she wouldn’t allow her daughters to follow in the players’ footsteps, stressing the need for modest attire.

“We’re Muslim people and we love our Islam and how religious we are,” she said. Women sports were fine in closed areas, she said.

The players say there’s no conflict between their faith and their sport.

Gadal said she once heard men at the stadium saying women playing the game was “haram,” or religiously forbidden, and the players belonged at home. She ignored them.

“I fast, I pray and I perform my Islamic duties. I see no problem,” she said, pointing out that numerous Muslim countries field women’s soccer teams.

Balatone, who was raised in a conservative household that is “religious but not extremist,” said she once explained to her brother why she was so determined to play.

She had already given up a lot. She had three passions: singing, soccer and English. She couldn’t afford college, she dropped singing because she was told it’s haram.

“When it came to soccer, I said ‘Excuse me, I cannot let soccer go,’” she said. “We live and breathe soccer.”

Associated Press religion coverage receives support from the Lilly Endowment through the Religion News Foundation. The AP is solely responsible for this content.