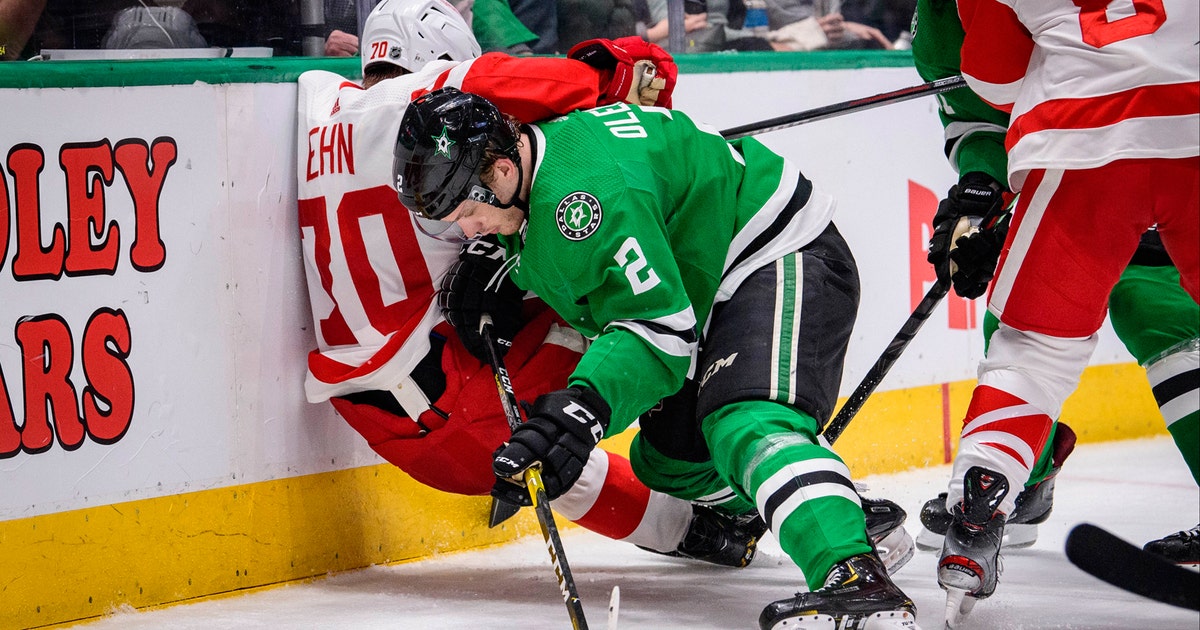 DALLAS (AP) — It was Joe Pavelski’s night, and the Dallas Stars enjoyed the show.

Pavelski had a goal and an assist, and Dallas beat the Detroit Red Wings 4-1 on Friday for its fourth straight come-from-behind win.

Pavelski was honored before the game for playing in his 1,000th NHL game last month, and then showed why he has lasted so long in the league.

“To be able to play a thousand games is a strength of character, not only skill and talent,” Stars interim coach Rick Bowness said, “so good for him. It was a great honor for him tonight, and he responded with an excellent game.”

Pavelski assisted on Roope Hintz’s tying goal in the first period and added the Stars’ third goal in the second. He had an apparent goal disallowed in the third because of goalie interference.

Radek Faksa and Andrej Sekera also scored for Dallas. Faksa’s goal was on the power play, and the goals by Hintz and Sekera were short-handed. Esa Lindell had three assists, tying a career high.

Dylan Larkin scored his 10th goal for Detroit. Jonathan Bernier finished with 23 saves in his first start since he beat San Jose 2-0 on Tuesday night for his first shutout of the season.

Larkin was disappointed when the Red Wings came up empty on a four-minute power play.

“We spent four minutes of power-play time and don’t come up with a whole lot,” he said.

Dallas (24-14-4) moved into a tie for second in the Central Division with idle Colorado, trailing only St. Louis with 58 points.

Pavelski played his first 13 years and 963 games for San Jose before joining the Stars this season. His 1,000th came on Dec. 20 at Florida.

“That’s not an easy switch to flip when you go from one team where you’ve been so long and come to another,” Bowness said. “He’s a big part of our hockey club.”

Pavelski was pleased that his family could join him for the pregame ceremony. It included son Nathan’s designation as the Junior Star of the Night, standing for the anthem with Dallas’ starting lineup.

“Now that he’s 9, he understands a lot of it,” Pavelski said. “He knows guys by their nicknames, and that’s fun. Everyone here’s just made our transition easy as far as feeling at home.”

The Stars increased their lead to 3-1 on Pavelski’s unassisted goal at 11:42 of the second period. He skated in 2-on-1 with Hintz, held on to the puck and sent a wrist shot into the net.

Four minutes into the third period, Pavelski knocked the puck across the goal line but Detroit coach Jeff Blashill successfully challenged the ruling.

Sekera added a short-handed empty-net goal on a wrist shot from the blue line with 2:56 to play. It was Sekera’s second goal in two games after he had gone three years without scoring.

NOTES: The Stars have rallied to win four consecutive games for the fourth time in franchise history, also accomplishing the feat twice during the 2005-06 season and once during the 2007-08 season. … Detroit is 0 for 14 on the power play in the last four games. … Stars RW Corey Perry began a five-game suspension for elbowing Nashville’s Ryan Ellis in the head during Wednesday’s Winter Classic. LW Joel Kiviranta was called up from Texas of the AHL. Kiviranta, 23, made his NHL debut. … Dallas D John Klingberg (lower-body injury) did not play. … Detroit won the first meeting between the teams 4-3 on Oct. 6. Anthony Mantha, now on injured reserve, scored all four Red Wings goals.

Red Wings: Complete a two-game trip on Sunday at Chicago.