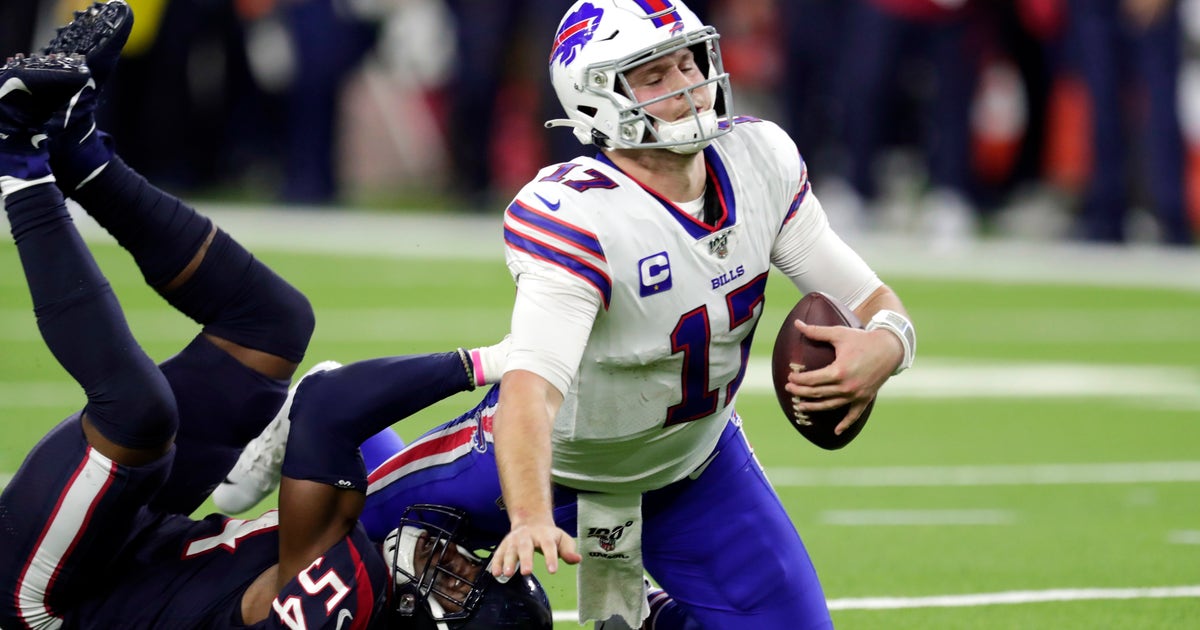 HOUSTON (AP) — Josh Allen didn’t look like a playoff rookie in the first half on Saturday as he led the Buffalo Bills to a double-digit halftime lead.

He wasn’t nearly as composed after that and it allowed the Houston Texans to get back in the game and rally for a 22-19 overtime win in the first round of the playoffs.

“There were some things we should have hit on,” Allen said. “I put that on my shoulders, especially with how well our defense played. Teams go how their quarterbacks go and I’ve got to be better for this team.”

Houston’s win extends Buffalo’s postseason losing streak to six games, with their most recent playoff win coming in 1995. It’s the first wild-card overtime game since the Broncos beat the Steelers 29-23 in the 2011 season.

Allen, who is in his second NFL season, threw for 264 yards, ran for 92 yards and caught a touchdown pass on a trick play in the first quarter, but often looked rattled late in his playoff debut.

“He was just trying to do too much and getting a little bit extreme with what he felt like we needed at the time,” Bills coach Sean McDermott said. “But overall, we just didn’t make enough plays.”

Allen scrambled 42 yards for a first down on Buffalo’s first possession for its longest rush of the season. Two plays later, the Bills used some trickery to take the lead when John Brown threw a 16-yard touchdown pass to Allen to make it 7-0. Brown’s pass was wobbly, but Allen was wide open despite having to slow down to grab it.

It was early in the second quarter when Allen appeared to fumble, and it was recovered by Houston. But the play was reviewed and overturned, giving Buffalo the ball at the Houston 32. The Bills were unable to move the ball after that and made a 40-yard field goal to make it 10-0.

The Bills (10-7) added another 40-yard field goal at the end of the second quarter to push the lead to 13-0 at halftime.

The Bills got a field goal in the third quarter to push their lead to 16 before Allen’s struggles began.

“You can’t let a team like that hang around,” McDermott said. “We had opportunities to go up 20 or so and we didn’t come away with touchdowns. So that let them hang around a little bit, and then they made some plays in the second half.”

The Bills were driving early in the fourth quarter when Allen was sacked by Whitney Mercilus and fumbled, and it was recovered by Jacob Martin at the Buffalo 47. Houston cashed in on the miscue with a 41-yard field goal that cut the lead to 16-11 with about 11 minutes to go.

Watson connected with Carlos Hyde on a 5-yard touchdown pass and Hopkins on a 2-point conversion with about five minutes left to put the Texans on top 19-16.

The Bills were in field-goal range on their next drive when Allen got a 14-yard penalty for intentional grounding and Buffalo lost a down to bring up fourth down. They went for it and Allen was sacked by Martin for a 19-yard loss to give Houston the ball back with 1:41 left.

“We didn’t execute how we should have, and we didn’t make as many plays as we should have,” Allen said. “That’s what it really comes down to. They made one more play than us.”

McDermott explained why he went for it on fourth down.

“We wanted to be aggressive,” he said. “It didn’t end up working out for us.”

But Buffalo got another chance after getting a stop on defense and ended a streak of 19 straight points by the Texans with Stephen Hauschka’s 47-yard field goal that tied it with 5 seconds left to force overtime.

Both teams punted on their first possessions of overtime. On Houston’s next drive, Watson evaded a sack by wriggling away from one defender and bouncing off another before rolling out to find Taiwan Jones for a 34-yard reception to set up first-and-goal.

Ka’imi Fairbairn then kicked a 28-yard field goal to lift Houston to the victory.

The Bills lost despite a strong defensive performance led by Jerry Hughes. He had three of Buffalo’s seven sacks and four of the team’s 12 quarterback hits to become the first player in franchise history with three sacks in a postseason game. He’s the first player in the NFL to have three sacks in the playoffs since Atlanta’s Grady Jarrett also had three in Super Bowl 51.