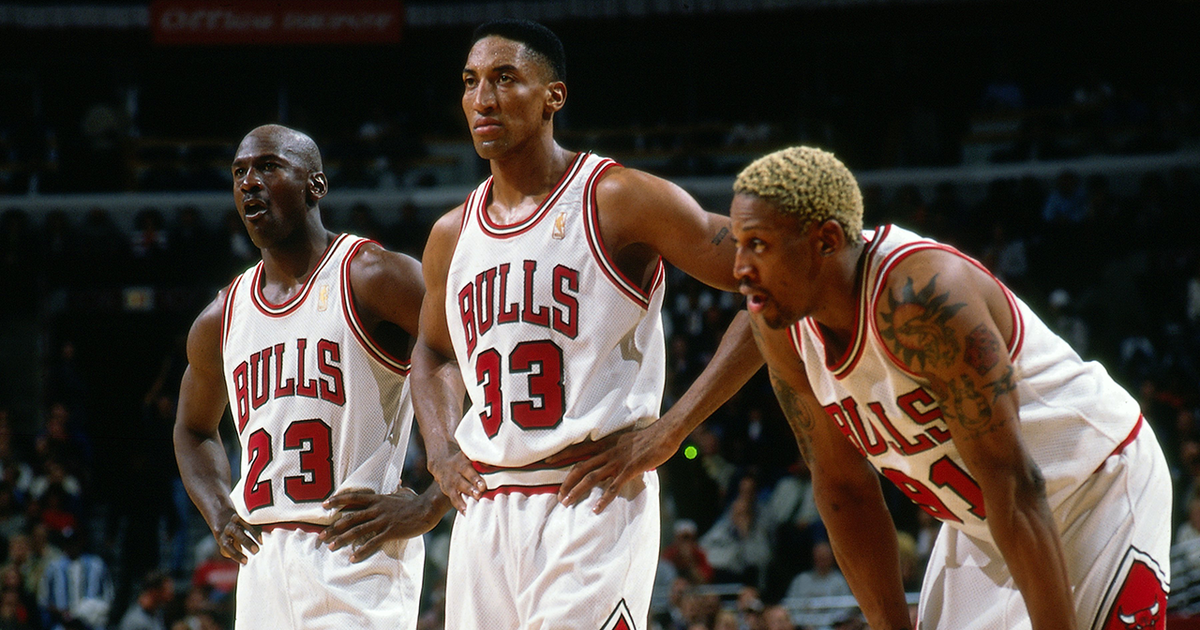 Well, that was well worth the wait.

If I had 3 wishes in life. I think I would have asked for #TheLastDance

And now, we’re all just waiting for more.

ESPN aired the first two episodes of its 10-part docuseries The Last Dance on Sunday night, chronicling the Chicago Bulls’ rise to prominence in the 1990s, culminating with the franchise’s sixth championship in 1998.

The first two episodes were nostalgic, compelling, and more than anything, they were revealing.

Here are five things that we learned from episodes 1 and 2:

1. Pippen was hot and cold with the Bulls organization

Over the course of two hours on Sunday night, we learned a lot about Scottie Pippen, including details about his upbringing.

Scottie Pippen had a childhood w two people in his modest childhood home living in wheelchairs. He had to beg to get a NAIA basketball opportunity. Sorry if I don’t lose much sleep over current NBA players being “miserable” because of mean comments on twitter. #WhatSilverSaid

Indeed, we learned that both Pippen’s father and brother could not walk, and Scottie came from very humble beginnings in Hamburg, Arkansas, where he was the youngest of 12 children and developed into a high school basketball star before spending four years at the University of Central Arkansas.

Pippen was actually selected fifth overall by the Seattle Supersonics in the 1987 NBA Draft, but the Bulls manufactured a trade to land him in Chicago, where he would eventually become a star alongside Michael Jordan.

However, despite his success with the Bulls, Pippen was essentially miserable heading into the 1997-98 season, which became clear in The Last Dance.

“I’m not going to f*ck my summer up.” -Scottie Pippen with a whole vibe right there.

Pippen suffered an ankle injury in the 1996-97 Eastern Conference Finals, but continued to play, helping lead the Bulls to their fifth NBA title a few weeks later. However, after the season, a disgruntled Pippen opted to enjoy his summer and put off surgery until the 1997-98 season was set to begin.

Pippen was unhappy with the 7-year, $18 million contract that he signed in 1991.

One of the main focuses of The Last Dance so far has been Scottie Pippen’s awful contract, but little time was spent on the details

So I dove into 1991 cap minutia to figure it out. This is how the Bulls managed to rob Scottie Pippen blind for seven yearshttps://t.co/Gorkct1c1u

In November 1997, Pippen went as far as to demand a trade because owner Jerry Reinsdorf and general manager Jerry Krause refused to renegotiate his deal.

?11 players on expiring contracts
?Scottie Pippen was the 6th highest player on the roster
?Team salary was $61.6M- MJ earned $33.1M
?️Rodman signed 1 week before the start of the seasonhttps://t.co/z4Y4YccCkU

Scottie would eventually back off his trade demands and return to the Bulls lineup, but still, he would miss the first half of the season and only play in 44 regular season games. The Bulls would start the season 8-7.

Part of Scottie’s resentment towards the organization, as revealed on Sunday, was that he felt underappreciated.

Even Jordan realized it.

And as of Monday, it seems like the fans realize it as well.

Would MJ have been MJ without Scottie Pippen?

2. Jordan was the first to load manage!

Ok – we don’t know this for a fact. And it certainly wasn’t something he wanted to do.

Regardless, it was remarkable to learn that after returning from a foot injury in his second season, Jordan was limited to 14 minutes per game!

Or was it 14 minutes per half?

There seems to be some confusion as to how much Jordan was actually allowed to play during the 1985-86 season.

After an early season foot injury forced MJ to miss 64 games, he returned to the lineup on March 15, 1986, against the Milwaukee Bucks. Over the next six games, he played a combined 93 minutes – 15.5 minutes per game. It wasn’t until March 28 that he played over 20 minutes in a game, logging 22 minutes against the New Jersey Nets.

Over the last nine games of the regular season, Jordan averaged 28.8 minutes. Then, in three playoff games, he averaged 45 minutes per game.

In the end, it seems like the minutes restriction that was touted as a major storyline in Episode 2 was quickly relaxed by the Bulls organization – probably because they were dealing with a basketball maniac.

That season, when doctors told Jordan there was a 10 percent chance that he could reaggravate his foot injury and end his career if he returned too soon, Jordan took his chances on the 90 percent.

The Bulls owner once asked Michael Jordan in regards to the risk of playing with an injury, “If you had a terrible headache and I gave you a bottle of pills and 9 of the pills would cure you and 1 of the pills would kill you — would you take a pill?”

To be exact, his answer was, “It depends how f—— bad the headache is.”

3. Jordan golfed with an opponent during the playoffs

In today’s day and age, we often give NBA players flack about being too friendly with their opponents.

Little did most of us know, Jordan was guilty of the same behavior decades ago.

Before Game 2 of the 1986 NBA playoffs first round matchup between Boston and Chicago, Jordan went golfing with Danny Ainge – a guard for the Celtics.

Apparently, Ainge not only defeated Jordan on the links, he talked a little smack while doing it.

In Game 2 – after scoring 49 points in Game 1 – MJ dropped a playoff record 63 points on the Celtics.

Even though the Celtics won the game in double overtime, Jordan arrived on that night – and Larry Bird made sure we knew it.

Sunday night gave us a deeper glimpse into Jordan’s upbringing – and the first athlete in the Jordan household was Larry Jordan, Michael’s older brother.

Not only did the two fight on the court, playing endless games of 1-on-1, there was also a few fights off the court.

In a clip from the docuseries, Michael’s late father James Jordan revealed that if Michael ever beat Larry, Larry would – as the kids say – “put hands on Michael.”

It was where Michael first learned to compete like his life depended on it.

We all owe Larry a debt of gratitude, for helping to create one of the greatest competitors in sports history.

The Bulls dynasty was given one final year to dominate.

So, Phil Jackson set the theme for the 1997-98 season: #TheLastDance pic.twitter.com/tJHlEJjyjm

Jackson, as evidenced by The Last Dance premiere and his illustrious career, was always a forward-thinker.

He was the ultimate ego manager, always putting the players first en route to leading the Bulls to six titles.

Phil Jackson being cool with Pip missing MONTHS of their last season because he wanted to spite management & enjoy his offseason is a perfect example of how Phil managed to keep all the egos in check & kept guys happy. Was always a player’s coach. #TheLastDance

And what became immediately clear during The Last Dance is that Jordan greatly respected and was fiercely loyal to Jackson.

“Phil said he could see me being a player-coach…well I could see him being general manager and the owner of a team,” Jordan said in an interview from March 1998. “It’s still not my decision. Just my opinion in the situation.”

What might have been? In this March, 1998 interview with Craig Sager, Michael Jordan suggests that Phil Jackson should take the helm as Bulls GM after Jackson suggested Jordan should be player/coach. #TheLastDance pic.twitter.com/E4WDfSE6Ov

It was well-known that Jordan only wanted to play for Jackson and would not return to the Bulls for the 1998-99 season if Jackson was not the coach.

It was also well-known that Bulls general manager Jerry Krause informed Jackson before the 1997-98 season that he would not return, regardless of how much success he had.

For the Bulls to tell Phil Jackson he couldn’t return even if they went 82-0 is insane. He’s the greatest coach of all time! He managed  some of the most notorious egos this game has ever seen and got everyone to buy in on his way to THREE 3-peats!

But what also came to light – not in The Last Dance but as a result of its release – is that Jordan also protected Pippen.

Pippen was involved in trade talks, specifically before the 1997-98 season.

One trade, according to NBA legend Tracy McGrady, would have landed McGrady in Chicago.

In 2016, Tracy McGrady said he was nearly traded to the Bulls for Scottie Pippen during the 1997 draft ?

MJ stepped in and “axed that whole deal.”

According to McGrady, Jordan said no to the deal.

MJ would go on to retire after winning his sixth championship and sixth NBA Finals MVP. Pippen was traded in the offseason and Jackson was done in Chicago.

The dynasty was finished and the Bulls have yet to make an NBA Finals appearance since that season.

It was indeed the last dance.