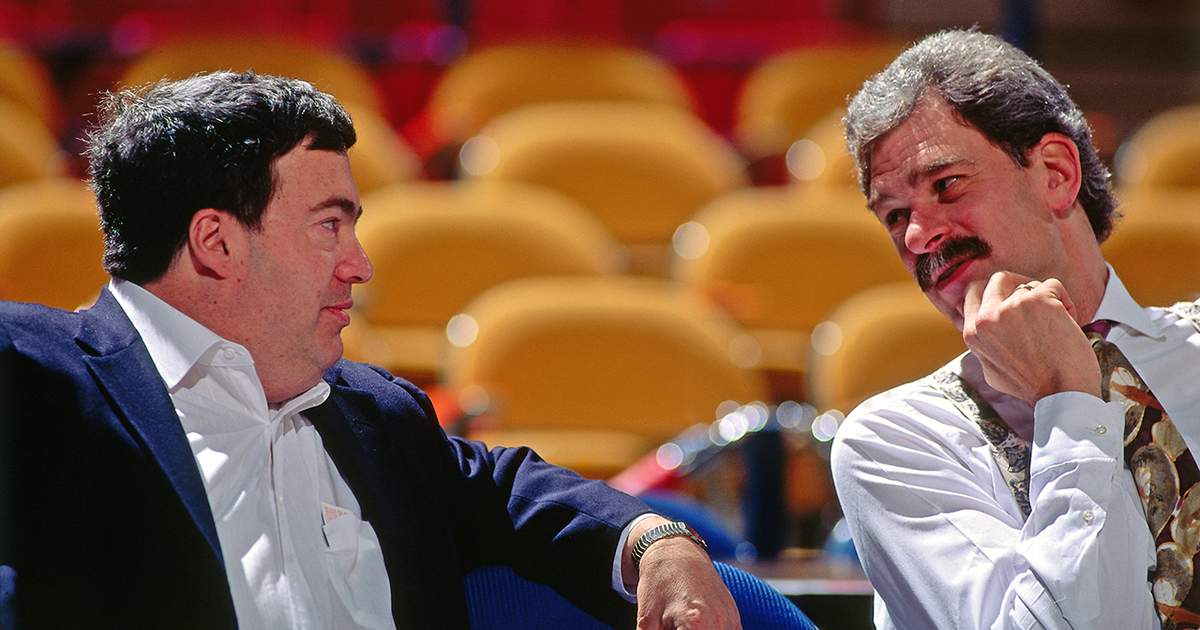 In today’s FOX Sports Insider: While Jerry Krause might be the antagonist of “The Last Dance,” his legacy is more complicated than it seems … we celebrate the 34-year anniversary of Michael Jordan’ evoking a higher power on the basketball court … and the 2020 NFL Draft class could be all about the wide receivers.

The internet caught fire on Sunday night after the opening two episodes of “The Last Dance” aired, and it remained ablaze into Monday.

A large part of the incendiary fuel that kept it burning emanated from the actions of one man, former Chicago Bulls general manager Jerry Krause. Every successful show, whether fictional or real, needs a bad guy, and Krause made the most obvious sense to be cast in that light.

Episodes 1 and 2 laid bare Krause’s role in the unrest pulsing through the 1997-98 Chicago Bulls, with Michael Jordan and Scottie Pippen firmly stationed in one camp and the GM in another, and on an island.

Unthinkable though it seems now, Krause was truly poised and hungering to break up the Bulls. He could scarcely wait to move on from head coach Phil Jackson and would not improve the terms of Pippen’s team-friendly contract, which was signed before the NBA’s money explosion.

I’m just happy that the world got to see what scoundrels Jerry Reinsdorf & Jerry Krause were. They broke up the best defensive team I ever saw and the greatest overall team I ever saw because Jordan was at his peak. More @Undisputed, now on FS1 https://t.co/GFsUykAbw6

Indeed, the opening episodes of “The Last Dance” largely centered on Krause. They showed Pippen furious enough at being the sixth best-paid Bulls member to delay surgery, long enough to cause him to miss more than half the last title season, and detailed his seething antipathy towards Krause, who was already installed as a favorite target for Jordan.

Jordan loved picking on Krause. In addition to some remarkable drama and fine storytelling, we saw on Sunday perhaps the greatest athlete of any era cruelly tormenting a short, overweight, socially awkward guy, for being exactly those things.

And social media loved it, too. The internet took great delight in ripping off jokes and memes aimed at Krause, many of them poking fun at his weight. If you like that kind of thing, it was perfect. Krause: the softest of soft targets, who can’t answer back, having died three years ago following a battle with an agonizing bone disease.

Sports fans are often more prone to side with the superstar athlete than the corporate guy who makes the decisions. The athletes are charismatic and, in the case of Jordan and Pippen, about as cool as cool has ever gotten. Krause was a ruthless corporate suit who looked unathletic, wouldn’t give the superstars what they wanted and hastened the end of maybe the best team ever.

And so, more than two decades later, many piled on to pour scorn and ridicule on Krause, with no fear of repercussion. What a buffoon, right?

Except that same buffoon was the one who brought Jackson to the Bulls from the Albany Patroons. And who green-lit the installation of Tex Winter and his triangle offense. And who persuaded Toni Kukoc to leave Europe. And yes, who took a kid from unheralded NAIA school Central Arkansas with the fifth pick of the 1987 draft by the name of “Scott” Pippen.

While Krause’s stance on Jackson, Jordan and Pippen seems mindless, doubly so with the benefit of hindsight, he also played a significant role in putting the whole thing together in the first place – and has a posthumous place in the Hall of Fame to show for it.

This is truly not a defense of Krause’s actions. NBA fans still seethe that basketball history was denied the chance to see those Bulls having another crack at more hardware. For me, the greatest loss isn’t that the Bulls didn’t win two more, but that they didn’t get to go shoulder-to-shoulder with the San Antonio Spurs of Tim Duncan and David Robinson in 1998-99, or the Shaq-Kobe Los Angeles Lakers a year later.

It is hard to fathom what Krause was thinking, but that’s also kind of the point. Krause took a different view of things, trading away Charles Oakley early in Jordan’s career to give the Bulls a big-man presence in Bill Cartwright. His interest in a possible Pippen trade during that final Bulls season wasn’t due to spite; it was a general manager trying to position his team to keep winning, as they’d done for so long.

He was wrong, of course, but it was a more complex situation than some might admit, and Krause was willing to take a chance.

Does he deserve to be the antagonist of “The Last Dance”? Probably; he did bring the Bulls’ dynasty to an end, something FOX Sports’ Chris Broussard called “the most unpardonable sin in sports.” He was driven, according to the principles in the documentary, in part by his resentment for not getting enough credit for Chicago’s success. There was that whole quote about organizations winning championships, too, that — misquote or not — stuck in the craw of the Bulls.

“They won 6 championships but that second 3-peat team was broken up prematurely…. It bothered me that Jerry Krause destroyed that team before it was time. I would’ve loved to see them play Duncan & Robinson.”

—@Chris_Broussard reacts to the first 2 episodes of ‘The Last Dance’ pic.twitter.com/pxFOeWdffG

And I am not unsympathetic towards Pippen over his contract situation. It is not nice being paid far less than you are worth, especially for athletes who have a limited career span.

Even so, while I loved Pippen as a player, I have a hard time positioning him as the victim in all this. His role with the Bulls landed him six championships and a spot in history, and he later made out beautifully financially. As his ex-wife gleefully pointed out on Sunday night, he earned $109 million throughout his career, more in total contract value than Jordan raked in.

Krause and Jackson had a poor relationship, too, undoubtedly. The front office was pilloried for wooing college basketball coach Tim Floyd while Jackson was still in suit, and Krause told Jackson he wouldn’t be back even if he went 82-0 in 1997-98. Yet it is worth remembering that part of Jackson’s own Zen philosophy dictated that remaining in one job for longer than seven years should typically be avoided.

And that raises a far larger question: What might have happened if those Bulls had remained together beyond 1998? As things stand, there is a beautiful symmetry to Jordan’s career and to the Bulls’ legacy. Six Finals appearances, six championships. Three before that infamous foray into baseball, three after it. But if “The Last Dance” had given way to an encore, would that dynasty still be defined by Finals perfection?

“I do wonder if that was actually good for the legend of Michael Jordan that we never saw them lose,” Nick Wright said on FS1’s First Things First.

Did Jerry Krause actually help the legend of Michael Jordan by breaking up the Bulls? @getnickwright explores: pic.twitter.com/w6niaAVnPo

“They were teetering. They were on fumes in those NBA Finals. You do feel like, had Jerry Krause not broken it up, it would have broken up on its own, and then Jordan maybe isn’t the perfect six-for-six, which so many people hold in better regard than if he was six-for-seven or six-for-eight.”

In that world, maybe we remember Krause in a different light — as simply one card in an unstable house ready to fall apart in a stiff breeze, rather than the demolitions expert who detonated the whole thing.

The start of “The Last Dance” was compelling enough that there is already an insatiable thirst for more. Heck, we haven’t even gotten to Dennis Rodman yet. There is plenty to look forward to, and plenty to think about. What to do until the next episodes drop?

Try this. If you’re one of the Krause haters, consider whether you really would have wanted basketball history to play out differently, even as you acknowledge his mistakes.