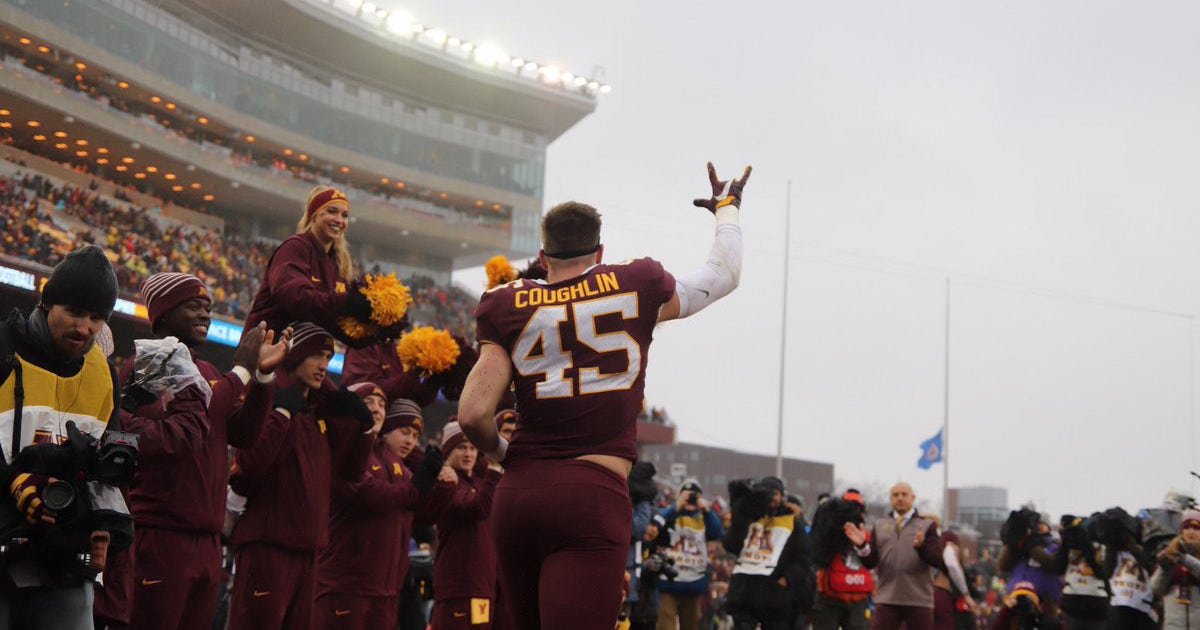 Getting drafted in the NFL has never been the goal for former Minnesota Gophers standout Carter Coughlin.

Neither has simply making a roster out of training camp.

Or dressing for an NFL game.

“I want to play in the NFL,” Coughlin said. “Whatever my role is as a rookie, I want to dominate that role. I want to outwork everybody and do it to the best of my abilities.”

With the NFL draft set to begin Thursday, Coughlin is spending most of his days at the family cabin in Pequot Lakes, Minn., working out in the garage and virtually chatting with coaches and executives.

“I miss talking football,” he said. “Usually, we’d be finishing up spring ball right now and have a whole month and a half of some intense football talk. It’s kind of nice to hop on a Zoom call and talk position and defensive schemes. I enjoy it a lot.”

Coughlin’s love for the game of football exudes out of every conversation, something that developed on gridirons across his home state of Minnesota.

As a consensus four-star prospect (and two-time state champion) out of Eden Prairie High School, Coughlin was highly recruited and even received a scholarship offer from powerhouse Ohio State.

But Coughlin chose to stay home at the University of Minnesota to continue the family legacy in maroon and gold. His father Robert Coughlin, uncle Mike Moe and grandfather Tom Moe all suited up for the Gophers. Coughlin’s mother Jennie Moe was a three-time all-conference tennis player for Minnesota from 1989-92.

Under head coach Tracy Claeys as a freshman in 2016, Coughlin appeared in nine games at linebacker and compiled 24 tackles, two sacks and four tackles for loss.

When P.J. Fleck took over the program in 2017, he shifted Coughlin over to rush end to improve the defensive line. Linebacker was a deep position for Minnesota with names like Kamal Martin, Jonathan Celestin and Thomas Barber on the depth chart. Fleck wanted to get his best 11 players on the field.

Coughlin thrived at the position and went on to register 134 tackles (36 for loss), 20.5 sacks and eight forced fumbles from 2017-19 while steering the Gophers to an improved record each year.

He ranks third in program history in career sacks (22.5) and fourth in tackles for loss (40), but Coughlin’s greatest legacy, perhaps, was giving the program stability through trying times. Coughlin, along with fellow members of the 2016 recruiting class like Tyler Johnson, Kamal Martin and Antoine Winfield Jr., stuck with the Gophers through the tumultuous 2016 offseason that included a player boycott, the firing of Claeys and the appointing of Fleck.

“Our goal was to make Minnesota as great as it can be,” Coughlin said. “When I committed, I had no idea my journey would look like it did. But that’s when you need to trust God. Trust that He’s directing your steps. It wasn’t easy but it was something we adjusted and adapted to.”

Coughlin’s final chapter with the maroon and gold was his finest.

On Nov. 9, 2019, Minnesota upset fifth-ranked Penn State 31-26 in front of a sold-out crowd at TCF Bank Stadium, a win that Coughlin pointed to as his favorite moment from a decorated collegiate career.

The victory boosted Minnesota’s record to 9-0 and catapulted it into a No. 7 ranking in the AP poll, the first time the Gophers were included in the top 10 since 1962. Coughlin led Minnesota with three tackles for loss and one sack.

It was a win that placed the Gophers football program back in the national spotlight.

“It turned out to be an incredible journey,” he said. “Leaving the university like we did last year is exactly how I would have wanted to leave it.”

I’ve been thinking about what I want to say, but this says it all. I’m so thankful for gopher nation, and I’m so proud I got to wear maroon and gold the last 4 years. Ski-U-Mah forever❤️ pic.twitter.com/T0GGblDBGK

Alongside teammates-turned-prospects like Johnson, Martin and Winfield, Coughlin has packed up his bags in Dinkytown and is approaching the next step in his football career: the NFL draft.

While Winfield is projected to go in the first two rounds and Johnson expected to be taken soon after that, Coughlin isn’t quite sure when he’ll be selected.

“It’s different from years past because the whole recruitment process is so different due to the situation we’re all in,” he said.

But Coughlin’s resume speaks for itself. After all, he’s got four productive college seasons under his belt and not a single red flag for organizations to worry about.

“A lot of teams made jokes that my interviews were pretty simple because I’ve got four years of film and haven’t ever gotten into any trouble or suspended or anything like that,” Coughlin said. “Teams look at my film and look at me and they know what they’re going to get.”

Coughlin was able to showcase his talents and toughness in front of NFL scouts Jan. 25 at the Senior Bowl. The Minnesota product came down with the flu and was forced to fight through the illness during the week of practice leading up to the senior showcase. Coughlin lost 10 pounds and had to get an IV before taking the field every day.

“We always talked about responding as a football team,” Coughlin said. “I’d like to think that over the course of my four years I turned into a really mentally tough player. I think that was, in some ways, a great display of that.”

Listed at 6-foot-3 and 236 pounds, Coughlin won’t be lining up as a traditional defensive end at the next level. He’ll likely be transitioning back to a familiar position.

“A lot of teams have been saying they love me as a SAM (strong side) outside linebacker that can pass rush and can drop into coverage,” he said. “It’s kind of like what I did at Minnesota but with more of a linebacker twist to it.”

No matter which team selects the versatile Coughlin, he’s confident it’ll be the right one.

“Ultimately, one team is going to look at me and say, ‘he’s an undersized edge rusher. He doesn’t fit our scheme,’ and other teams are going to say, ‘I love that he can do this and that.’”

Coughlin is projected to be a sixth- or seventh-round pick by several national media outlets, including The Athletic and CBS Sports. But, again, that’s not why he’s entering the draft.

“The reason I want to be in the NFL is to play football. Because I love football,” Coughlin said. “To me, getting drafted is just that first step towards my NFL career.”