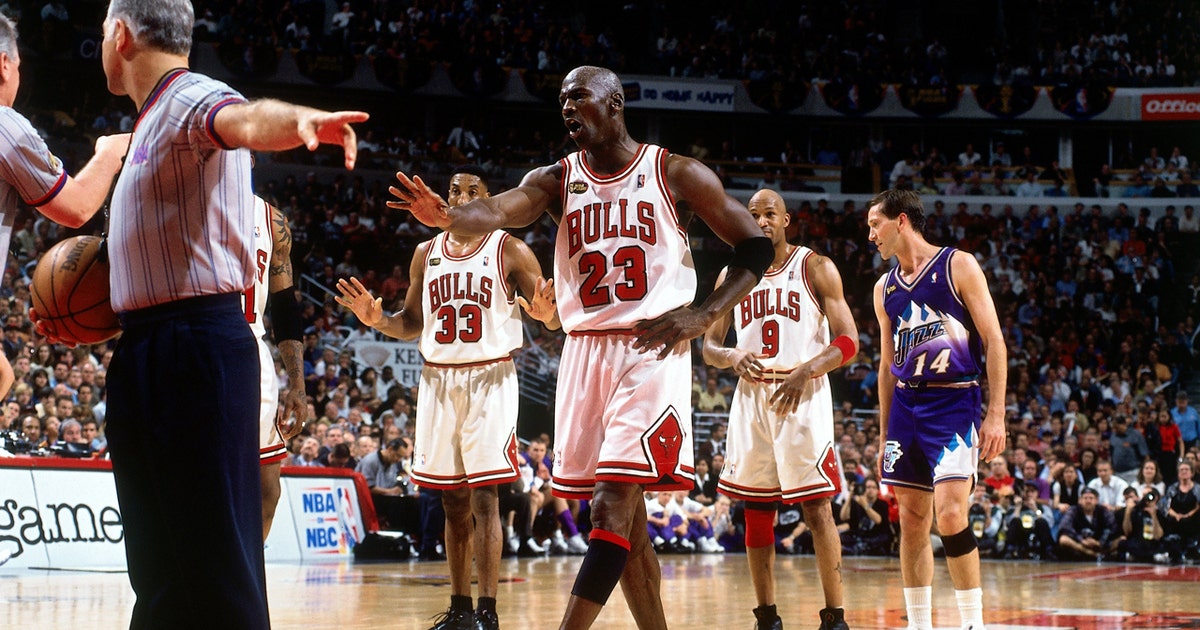 In the final seconds of the 1982 National Championship, Michael Jordan sank a beautiful jump shot against Georgetown to win the title for UNC.

This is common knowledge, the stuff of sports legend. And yet, watching the clip again in “The Last Dance” — the 10-part documentary about Michael Jordan and the 1997-98 Bulls — felt like sticking my finger into a wall socket of delight. I was electrocuted with joy. You’d think I’d never seen someone make a go-ahead jumper before.

It feels like I haven’t. We’ve been without sports for over a month now. While people have been psyched about the Jordan doc for a long time, there was no way anyone could have known just how much this series would mean in the spring of 2020. The first two episodes on Sunday night were a piece of chocolate cake when you haven’t had dessert for weeks. Even those two hours didn’t feel like enough for some fans — at the end of the second episode, lots of people tweeted, “RELEASE THE REST OF IT!!!!” at ESPN. They wanted the whole cake.

Here’s a little taste of what’s to come. #TheLastDance pic.twitter.com/93xH1tphGo

Personally, I’m glad the doc is being parsed out across the next four Sundays. How else am I gonna know what day of the week it is?

Look, I know we can’t have sports right now. It’s for the best, and it’s so important that everyone who can stay home does so. But man, I miss them. There’s this ache somewhere between my ribcage and my stomach when I think about how we should be watching the NBA playoffs. It feels like the opposite of having a crush on someone.

Sports are about a lot of things: competition, identity, excitement. They’re also about community. There’s comfort in commiserating with another sad Knicks fan (sorry) on the train after a loss. I don’t miss sports simply because I want a distraction, or because I yearn for one more form of entertainment. The ache is bigger than that. Games make you feel things with other people. These days, we’re all living in a state of sensory deprivation. I miss sports so much because sports embody everything we don’t currently have.

“The Last Dance” lived up to the hype. It gave the sports world something to rally around. Excited fans hopped onto Twitter and into group texts to rehash the explosive pieces of information about the NBA’s greatest dynasty. There aren’t many good surprises these days, but I was pleasantly shocked by some of the things interviewees said in the first two episodes. I mean…I did not expect the words “traveling cocaine circus” to come out of my TV on Sunday night, but they did.

I loved those words. But every verbal gem hit a different pain point in my sportsless life right now. And now, because misery loves company, I’m going to make you feel them, too.

1. “I’m not gonna [expletive] my summer up” — Scottie Pippen

My god, I love some good shade. Here’s what Pippen was talking about: In 1997, he was the second-best player in the NBA, but his salary was the 122nd highest. Why? Pippen accepted a pretty bad long-term deal with the Bulls, because didn’t want to risk losing his chance to make enough money to support his family back home in Hamburg, Arkansas. Unfortunately, shortly after he signed, the popularity of the league exploded, and the Bulls rocket ship took off.

By 1997, Pippen was understandably at odds with management about his paycheck and role on the team. He needed ankle surgery before the next season started, but rather than go under the knife in the spring and spend the summer rehabbing, he opted to wait until closer to the fall. In the doc, Pippen explained he wasn’t about to give up his only free time of the year going through something painful for an organization that wasn’t dedicated to him.

I would do terrible things right now to get back to the daily news cycle of athletes taking shots at management or at each other. No games mean significantly less shade, and that is terrible news for me, a person who loves other people’s drama.

2. “I didn’t win without Scottie Pippen… That’s why I consider him my greatest teammate of all-time.” — Michael Jordan

This is basically a verbal hug from MJ to Scottie, and one of my favorite moments in the doc was when Jordan wouldn’t hug his teammates on the bench after a win.

Don’t you miss bench moments? Like Zion Williamson falling asleep during a Pelicans’ game he wasn’t playing in? Or Kawhi Leonard sitting there with a towel on his head? I’m sorry, I don’t know why I’m pouring salt in the wound. But I can’t stop.

3. “Michael Jordan is the only player that could ever turn it on and off, and he never frickin’ turned it off.” – Roy Williams

Current UNC head coach Roy Williams was an assistant when Jordan was in college, and Williams shone in his interviews during the first two episodes. My only problem with his appearances is that there weren’t nearly enough. I loved listening to the legendary coach describe how magical it was to watch Jordan play, peppering sentences with his trademark “daggums” and “frickens” and “darnits.”

I really wanted to know what Williams would have said at the end of UNC’s 2020 season, considering he roasted his team all year. Perhaps he’ll still let loose, but it would’ve been way more fun if the Tar Heels had flamed out of the tournament or surprised their coach by going on a Cinderella run.

In 1986, the Bulls lost to the Celtics in the playoffs, but Jordan gave a team stacked with future Hall of Famers a run for its money. He scored 49 points in Game 1. The next day, he went golfing with then-player, now-GM Danny Ainge. The day after that? Jordan dropped 63 points in Game 2. Makes you wonder if Ainge has ever golfed again.

Celtics legend Larry Bird looked awestruck speaking on camera about MJ’s ability. I’m not terribly religious, but after watching highlights from Game 2, I’m inclined to agree with Mr. Bird (isn’t it so funny to call him Mr. Bird?). Humans can’t do what Jordan did. Still, it was hard not to think about how much I wanted to watch LeBron James ball out this year for the Lakers in the playoffs.

5. “One of the articles I read, they called it ‘The Bulls’ traveling cocaine circus.’” — Interviewer to Michael Jordan

The 1984 Chicago Bulls liked to party. When one of the documentary makers told Jordan that the team in Jordan’s rookie year had been described as the “traveling cocaine circus,” Jordan absolutely lost it. Once he stopped laughing, he addressed the nickname by saying something along the lines of, “uh, yeah, there was….some drugs….and partying….but I didn’t do it.”

Half the fun of sports is the off-court shenanigans. When no one can go anywhere, there are no shenanigans. I MISS SHENANIGANS!!!!

6. “The Cubs have been rebuilding for 42 years.” — Michael Jordan in 1997 after winning his fifth championship with the Bulls.

Jordan took a playful swipe at the Cubs when a reporter asked him about the rebuild GM Jerry Krause wanted after the Bulls won the 1997 title (if Twitter had been around then, we’d have gotten at least three days worth of content out of that quote). Jordan’s line is funny, but his point was serious: rebuilding a team takes a long time. Why would Krause mess with such a good thing? Why break up a championship-winning squad that probably had more than one win left in them?

The documentary suggests that Krause, who passed away in 2017, wanted the credit for wins. He famously said that “organizations win championships,” not players. He didn’t like head coach Phil Jackson, and he didn’t like that Jordan was getting all the credit. Even knowing that Krause was the way he was, it’s still hard to understand how anyone, no matter the size of their ego, could break up a team that impressive. Did I yell at my television last night in frustration? Yeah. But, in fairness, who else was I gonna talk to?

I miss talking to people.

You know what I don’t miss? Management making dumb decisions about dynasties.

Listen, I’m not trying to speak ill of the dead. But I didn’t hear a whole lot of people rushing to defend Krause’s strategy.

“Jerry Krause is right there, I don’t know who invited him. I didn’t”

MJ during his HOF speech ? pic.twitter.com/2LDN4wuqPY

“I looked at him and I said, depends how [expletive] bad the headache is!” — Michael Jordan

Jordan was frustrated with the Bulls when they wouldn’t let him return to the court as quickly as he wanted to after he broke his foot. Team owner Jerry Reinsdorf limited Jordan’s minutes, and Jordan suspected it was because the Bulls were trying to miss the playoffs in order to move up in the NBA draft that year. It was then that MJ’s relationships soured with management; he was famously a “win no matter what” guy.

I loved these glimpses of Michael Jordan’s ruthless competitiveness. Kawhi Leonard and Russell Westbrook have traces of these qualities, but no one in the league besides Kobe Bryant has really come close since Jordan himself. Sports aren’t always about community and lifting people up. Sometimes they’re just about winning. And we could all use a few Ws right now.

“Depends how f—ing bad the headache is!”

I cannot wait for next Sunday.