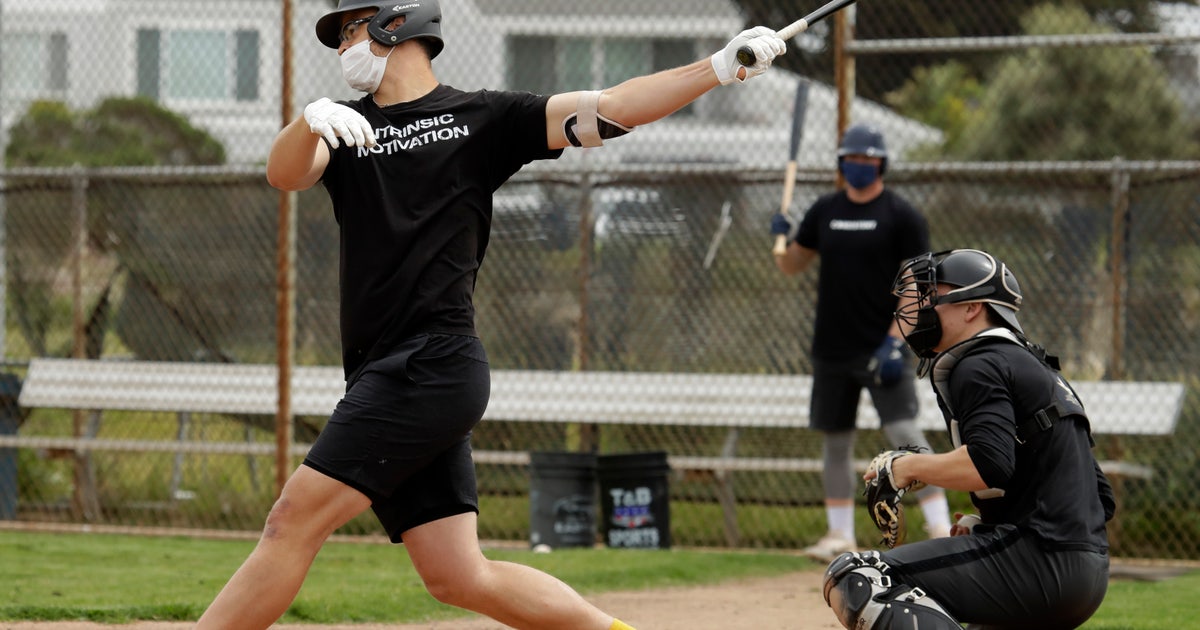 ALAMEDA, Calif. — Andre Nnebe hollers over the breeze coming off the bay behind home plate and announces to the group, “First pitch, 2:10!”

The Milwaukee Brewers minor leaguer, out of Santa Clara University, thanks college catcher Eamonn Lance for showing up because now there can be live batting practice, something Nnebe hasn’t done since the coronavirus put a sudden halt on sports.

For this informal simulated game last week at a noted high school field, the catcher isn’t the only player wearing a mask. Nnebe stands in wearing a protective face covering, and same with the guy waiting in the on-deck circle.

Nnebe and thousands more players like him are trying any way they can to stay ready amid the uncertainty of whether there will even be a big league baseball season, let alone anything for the game’s lower levels. They are trying to prepare while social distancing from 6 feet apart and without drawing a crowd as California is under a shelter-in-place order.

For now, for 90 minutes anyway, Nnebe and seven others are in their element again, albeit far different from just six weeks ago.

They relish talking everything baseball — the draft, how the ball is carrying, the future. Hearing that familiar crack of the bat is both refreshing and energizing, briefly taking the players’ minds off the pressures and all that is going on in the world.

They got a tip that the gates of Encinal High School’s famous Willie Stargell Field were open, and decided to give it a try.

“This is the closest thing to a game,” says University of California senior pitcher Jack Delmore, from Alameda. “I haven’t been excited in a while.”

Three Canadian geese stand in as infielders, playing the shift, no less. Dozens more continuously honk from beyond left field, next to a dirt track that has been closed because of COVID-19, providing an impromptu rooting section.

After Nnebe’s first round of swings, Joey Wagman walks out to offer a squirt of hand sanitizer to Lance.

No high-fives. No handshakes. The new norm.

Wagman previously pitched in Oakland’s farm system, then spent the past two years in independent ball. The right-hander had been set to play for Israel in the Olympics this summer.

“Need a little break?” Nnebe asks Lance at one point.

It’s back to work.

Wagman shoots video as Delmore pitches. Soon, it’s Wagman’s turn on the mound. He has a little fun with the hitters: “Just so you know, I don’t throw a cutter. That’s a four-seam.”

“I feel bad to be a pitcher today. If it gets in the air, it’s going 50 feet further than it should,” declares Nick Adgar, a free agent outfielder who had his senior season at Menlo College interrupted.

Adgar plans to play in the Mexican League, where big league veterans Rajai Davis and Bartolo Colón were set to be this year.

A day after this workout last Friday, Adgar and Wagman hopped a fence at Lincoln Middle School across town for more hitting work. They always have an eye out for available fields.

The virus outbreak has forced athletes to get creative.

“It’s just crazy,” Adgar says. “It’s the same thing every day, so it’s stay ready for a date we don’t really know when. We should be playing games right now. With the uncertainty, we have to stay as ready as we can.”

At 6-feet-6 1/2 and 240 pounds, Nnebe hears people compare his frame to that of New York Yankees slugger Aaron Judge, a star from California’s Central Valley.

Nnebe began his pro career last year and hit four home runs over 34 games in rookie ball for the Brewers.

Nnebe and University of Washington right-hander Leo Nierenberg, both from Oakland, played catch at Lincoln Middle School last week, too.

To get his swings in, Nnebe built a batting cage in the backyard at his house and ordered some basic gym equipment.

“We’ve been going to different spots. With everything going on, I think no one really knows what’s going to happen,” Nnebe says. “It might be big leagues only, it might be minor leagues, it might be nothing at all.”

“The guys I work out with, it’s kind of a mix of college and pro,” he says. “We’re just trying to stay as ready as possible because if it starts back up, you want to be as close to not missing a beat as you can.”