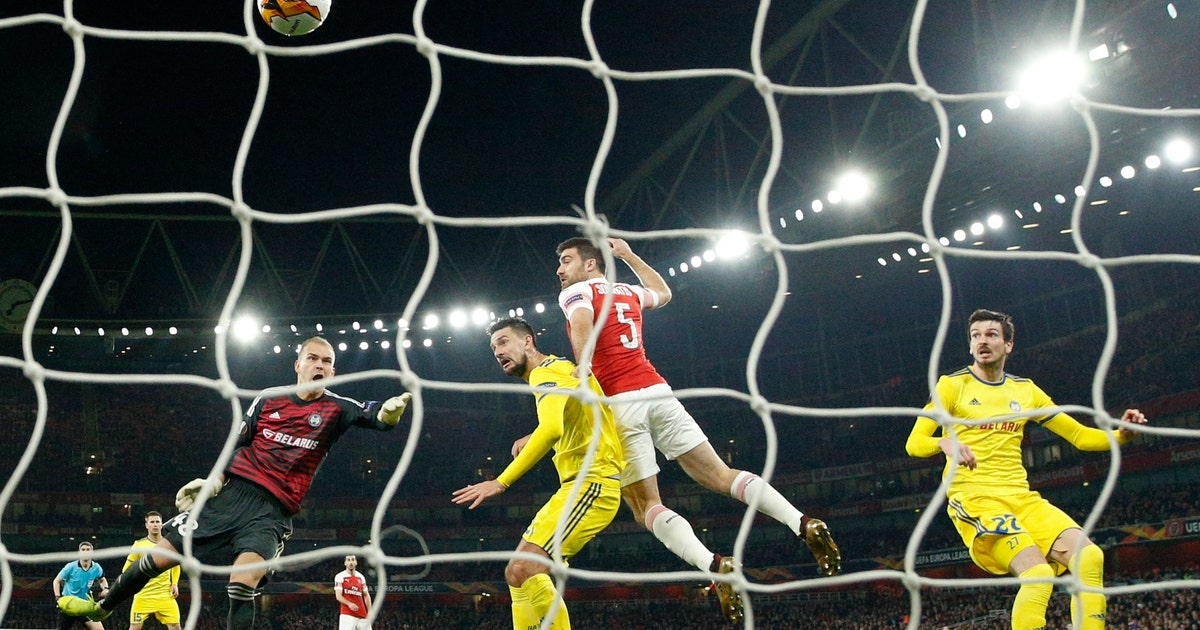 Arsenal rebounded from a 1-0 loss to BATE Borisov a week ago with a comprehensive 3-0 second-leg victory in the Europa League on Thursday to reach the round of 16.

Pierre-Emerick Aubameyang forced an early own goal before center backs Shkodran Mustafi and Sokratis Papastathopoulos added one apiece for Arsenal to advance 3-1 on aggregate.

Italian club Napoli also had no problems to make the next phase while last year’s semifinalist Salzburg, Eintracht Frankfurt, Valencia, Villarreal, Dinamo Zagreb and Zenit all made it through.

Chelsea and Inter Milan played later in the day. Former champion Sevilla advanced after knocking out Lazio on Wednesday.

The draw for the last 16 is scheduled for Friday.

Those changes paid off.

Aubameyang needed just four minutes to create the opener. He broke down the right before his cross hit defender Zakhar Volkov, who diverted the ball past goalkeeper Denis Scherbitski.

Lichtsteiner made his presence felt when he saved on the goal line minutes later.

Mustafi headed home the second from Granit Xhaka’s corner six minutes before interval. Papastathopoulos scored with another header on the hour mark, just four minutes after coming from the bench as substitute to replace injured captain Laurent Koscielny.

Aleksandr Hleb, who played for Arsenal from 2005-08, came on as substitute in the 58th and was applauded by the home fans at the Emirates Stadium.

After four consecutive draws in all competitions — including 2-2 at Shakhtar Donetsk last week in the first leg — Eintracht Frankfurt celebrated a 4-1 victory and advance 6-3 overall.

Forward Luka Jovic scored his sixth European League goal this season for a 1-0 lead in the 23rd. It was 2-0 just four minutes later after Sebastien Haller converted from the penalty spot, sending goalkeeper Andriy Pyatov the wrong way. Haller added his second and substitute Ante Rebic also scored late in the game.

Napoli coach Carlo Ancelotti made it two wins from his first two games in the Europa League with a 2-0 home victory over Zurich.

After a 3-1 away win in Switzerland last week, Napoli easily advanced 5-1 on aggregate.

Forwards Simone Verdi and Adam Ounas scored in each half at the Stadio San Paolo.

Ancelotti, who won the Champions League three times as a coach, is off to a good start in Europe’s second-tier competition as well.

Patson Daka netted twice and Xaver Schlager and Munas Dabbur added one each for Salzburg to erase a 2-1 deficit from the first leg and put Salzburg into the next round with a 5-2 aggregate victory over Club Brugge.

Valencia went through 3-0 on aggregate after beating Celtic 1-0 at home.

Dinamo Zagreb routed Viktoria Plzen 3-0 for a result that comfortably secured a spot in the next round for the Croatian side after losing 2-1 in the first leg.

Pablo Fornals scored 10 minutes from time for Villarreal to draw 1-1 in the second leg against Sporting Lisbon, enough to advance after winning 1-0 in the first leg.