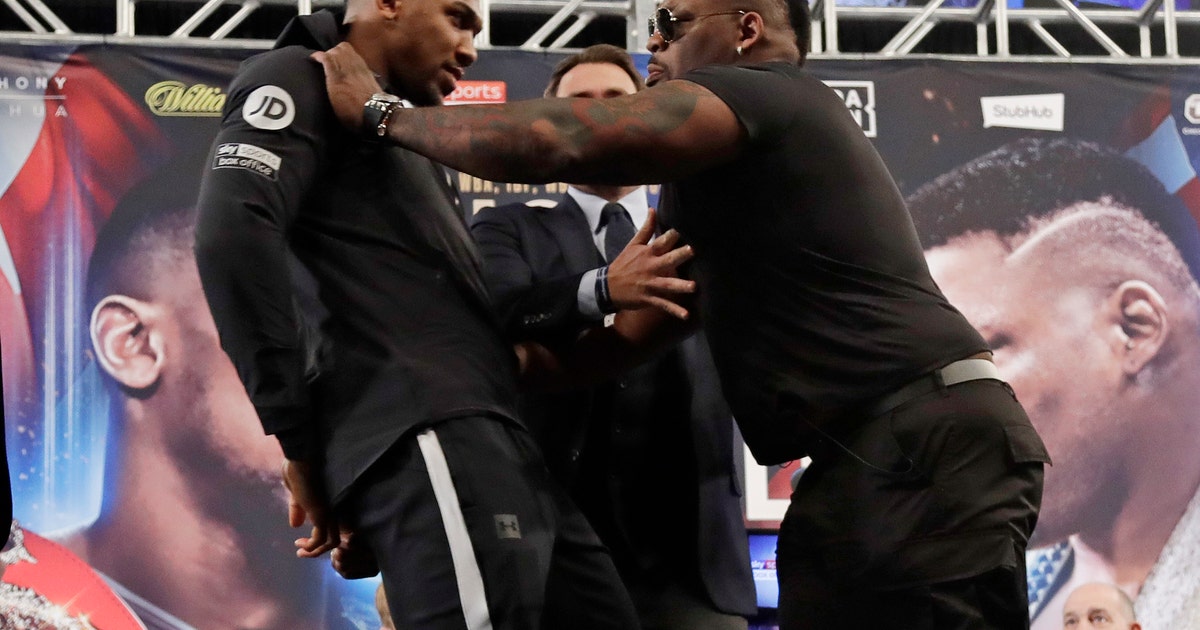 NEW YORK (AP) — Staring contests, shouting matches, some shoving. Even a near mix-up with some members of the audience.

All part of the pregame show, if you will, when heavyweight champion Anthony Joshua and challenger Jarrell Miller shared a makeshift stage at Madison Square Garden on Tuesday.

The title fight, Joshua’s U.S. debut, isn’t until June 1. The WBA, IBF, WBO and IBO belt holder is unbeaten (22-0, 21 knockouts), but has only fought in the United Kingdom, where he’s filled London’s Wembley Stadium and Cardiff’s Principality Stadium for defenses of his title. Now, it’s the Garden, an arena synonymous with boxing, but a new locale for the champion.

“I am not here to win a popularity contest. I don’t want to focus on the recognition part,” Joshua said. “That’s a losing battle. But as far as fighting around the world, I like to fight wherever the market is. In the U.K., we had 100,000 coming out and that’s why it made sense to be fighting there. At the moment, it’s brilliant to be at Madison Square Garden, with a global audience.

“We’ve built it from the ground up in the U.K., and now we’re coming over.”

He’s coming over to Miller’s backyard; the heavyweight known as Big Baby (23-0-1, 20 knockouts) is from Brooklyn. Joshua basically shrugs when that’s mentioned.

Miller wasn’t slow to insult Joshua at every turn Tuesday, calling the Briton everything from “phony” to “no role model” to a “prom queen.”

“The way I got here is unconventional, something out of a fantasy book. I worked hard for this, hard. Ground it out. I got to go to war.”

Miller especially was annoyed when Joshua said he would train for the fight in Brooklyn. And as allegations from each boxer flew about alleged use of illegal substances — Miller tested positive for a banned drug in 2014 — they shouted over each other into microphones at a news conference without ever really answering questions.

Miller claimed Joshua “has to have people look up to him like he is some kind of a god” while adding Joshua is “a puppeteer.”

But they were ready to make some predictions. Before leaving the stage early, Miller vowed he’ll step out of the Garden ring in June as the champion. And Joshua promised, “I am going to knock him out on June 1. He’s the softest puncher in the heavyweight division.”

“I just gave him a big paycheck and some cheeseburgers,” Joshua joked. “It was an easy promotion.”

The bout will be streamed by DAZN in the United States and televised by Sky Sports in the U.K. Hopefully it will have more jabs and hooks and uppercuts with the gloves on in the ring and not the mouthing off that marked the beginning of the promotion.