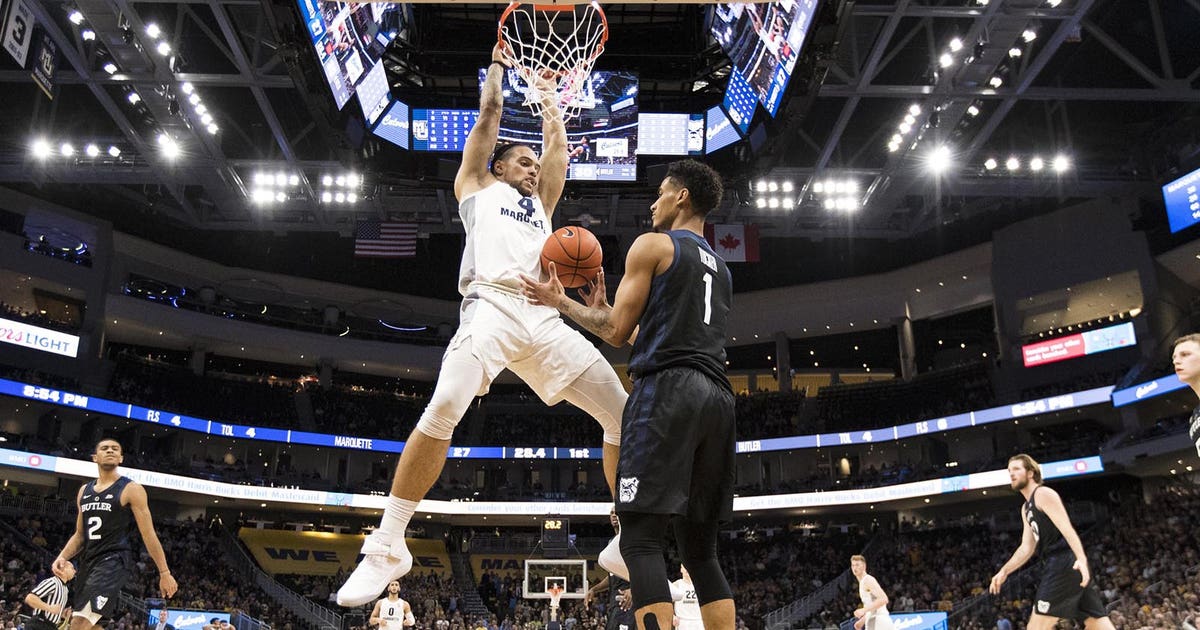 MILWAUKEE — Markus Howard scored 28 points and Theo John added 15 points and 11 rebounds as No. 11 Marquette pulled away in the second half for a 79-69 victory over Butler on Wednesday night.

With No. 17 Villanova’s 85-73 loss at Georgetown on Wednesday, the Golden Eagles moved into the Big East lead a half-game ahead of the Wildcats.

Howard, the Big East’s leading scorer, made 9 of 20 shots, including 6 of 13 from beyond the arc.

Baldwin hit two free throws to put Butler in front 44-43 with 12:45 remaining, but the Golden Eagles ran off 11 consecutive points, pushing the lead to 54-44 on John’s rebound dunk.

Jordan Tucker ended Butler’s scoring drought of almost 5 ½ minutes with a 3-pointer. On the ensuing possession, Howard was fouled on a 3 and converted the four-point play to make it 58-47 with 6:48 remaining.

.@Theojohn123 flexed his muscles in the paint tonight. ??

Butler scored the first seven points of the second half to go up 37-29, but Marquette answered with eight consecutive points, pulling even at 37 on John’s layin.

Butler: The Bulldogs entered Wednesday in a six-team logjam in the middle of the conference, one game behind St. John’s and Seton Hall in the win column, and a game ahead of Georgetown, DePaul and Xavier.

Marquette: The Golden Eagles have five regular-season games against teams they already have beaten. But, except for a 79-68 home victory over Providence, each of the other four games were decided by four points or less.

Marquette is at Providence on Saturday.