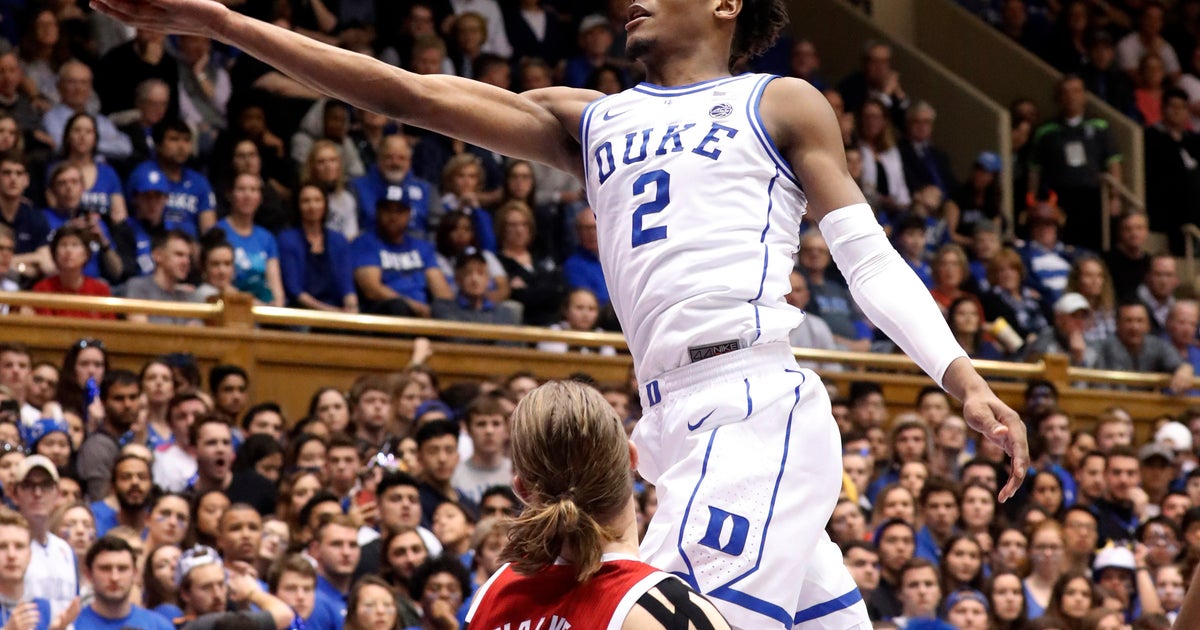 North Carolina coach Roy Williams set his sights on landing Zion Williamson out of high school, only to see him end up down the road at the Tar Heels’ biggest rival.

Williams and the rest of the eight-ranked Tar Heels will get an up-close look at top-ranked Duke’s rim-wrecking freshman Wednesday in what’s sure to be a foundation-shaking atmosphere at Cameron Indoor Stadium.

“Zion’s a different bird, there’s no question about that,” Williams said on Monday. “We tried to recruit him very hard. He’s got a combination of skill set that I’ve never seen before and there is a lot of attention, but he deserves it. He’s backed it up.”

Williamson arrived at Duke with plenty of hype, a 6-foot-8, 285-pound force who created a massive following with his head-above-the-rim dunks.

He’s exceeded even those lofty expectations by doing the same things he did to high schoolers against college players. Williamson is right behind fellow freshman R.J. Barrett with 22.4 points per game, grabs 9.2 rebounds and often has more highlights in one game than most players have all season.

Since losing to Syracuse on Jan. 14, Duke has reeled off nine straight wins, including a 23-point comeback victory over No. 18 Louisville. The Blue Devils moved up a spot to No. 1 this week after Tennessee lost to No. 4 Kentucky.

“It’s hard to kind of miss the hype they get, just because it’s all over the place, but we try not to pay attention to it,” North Carolina senior guard Cameron Johnson said. “We go about our own business and we’re really confident in the group that we have. But it’ll definitely be a big opportunity for us.”

The Tar Heels (20-5, 10-2) had a seven-game winning streak ended by No. 3 Virginia last Monday, but bounced back with a rout over Wake Forest.

North Carolina won two of three against their biggest rival a year ago, including the semifinals of the ACC Tournament in New York.

This rivalry is already one of the best in sports and having both teams ranked in the top 10, not to mention playing well, make it must-watch TV.

Duke gets a rematch on Saturday against Syracuse and North Carolina has a tough game against No. 16 Florida State.

Duke-Carolina isn’t the only rivalry game going on this week.

On Sunday, No. 7 Michigan hosts No. 10 Michigan State with the Big Ten lead likely on the line.

The Spartans (21-5) play Rutgers on Wednesday and the Wolverines (23-3) have to get past Minnesota on Thursday, so there’s a chance they won’t still be tied come Sunday.

Regardless of the records, expect the Crisler Center to be rockin’.

No. 12 Kansas faces a big test in its bid for a 15th straight Big 12 title, playing at No. 14 Texas Tech. The Jayhawks enter the week tied with the Red Raiders for second in the conference, a half-game behind Kansas State. Kansas won the first meeting 79-63 at Allen Fieldhouse.

The big game in the SEC pits former-No. 1 Tennessee and No. 13 LSU. The Vols dropped to No. 5 in this week’s poll after losing to Kentucky, which lost to LSU earlier in the week.

In addition to North Carolina-Florida State, the ACC has a ranked vs. ranked game between No. 3 Virginia and No. 18 Louisville.

The Cavaliers bounced back from a loss to Duke with wins over North Carolina and Notre Dame last week to remain within a game of the Blue Devils in the ACC. Louisville suffered a difficult loss to Duke by blowing the 23-point lead and nearly had another collapse before holding off Clemson last week.

The only other game between ranked teams this week is Tuesday, when No. 24 Maryland plays at No. 21 Iowa.