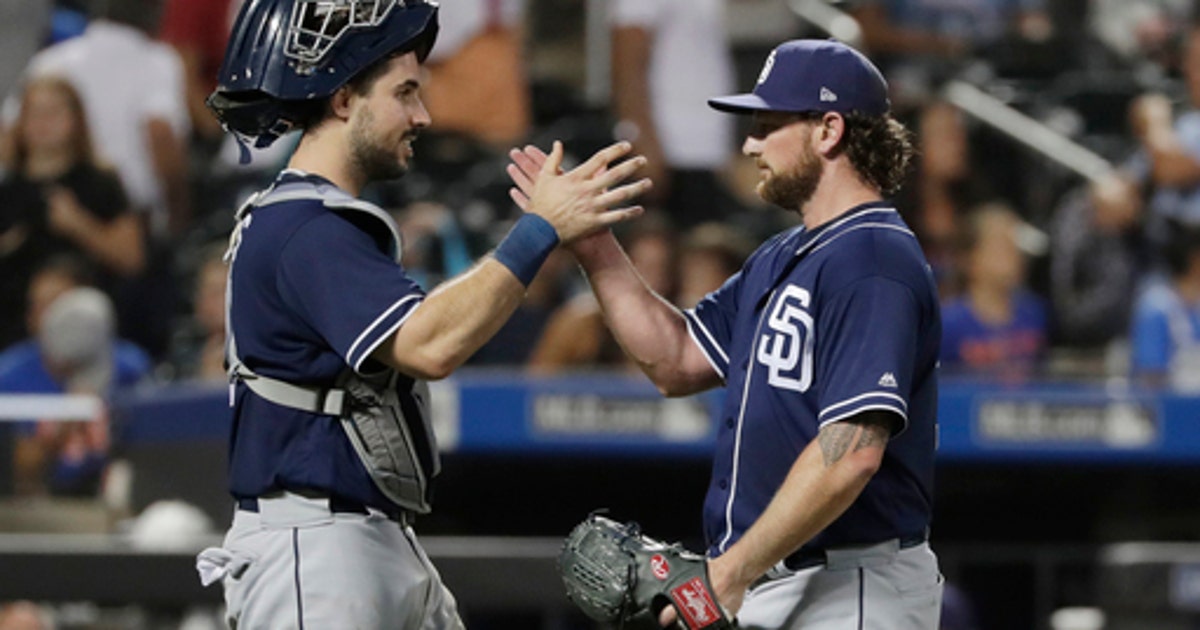 From now until Spring Training concludes, Fox Sports San Diego will preview each player at each position that is in big league camp.

To kick things off as we wait for a certain free-agent signing to become official (hint, hint), we will look at the Padres bullpen; which was certainly a bright spot in 2018.

With many of the same pieces returning this season, San Diego will be looking for another solid campaign from the guys who reside beyond Petco’s left-center field wall.

The Padres have done as good a job as any team in baseball when it comes to acquiring and developing arms that were castoffs in other places, and Kirby Yates is no exception. Prior to being acquired by the Padres, Yates owned an underwhelming 5.38 ERA in 98 ⅓ career MLB innings.

After being acquired by San Diego in April of 2017, something clicked. Yates ended up appearing in 61 games after being acquired, firing 55 ⅔ innings with a 3.72 ERA. He also struck out an eye-popping 14.07 batters per nine innings.

Firmly in an organization’s plans for the first time in his entire career, Yates had a fantastic 2018. The first half of his season was spent as the setup man for All-Star closer Brad Hand. During that time, an argument could have been made that he was the best setup man in baseball. Prior to the All-Star break, the Hawaii native accumulated a 1.43 ERA in 37 ⅔ innings pitched. He struck out 48 batters while only walking 11 in that span. Following the trade of Brad Hand on July 19, Yates transitioned to the closer role. He recorded 10 saves in limited opportunity, and although his ERA was nearly two runs higher than it was in the first half of the season (3.08), he struck out nearly 15 batters per nine innings.

Yates enters camp in 2019 as the odds-on favorite to be the Padres closer.

Stammen joined the Padres in 2017 looking to revive his career, and it turned out to be a worthy decision for both parties. In his first season out West, he appeared in 60 games; throwing 80 1/3 innings with a rock-solid 3.14 ERA.

During the following January, he decided to re-up with the franchise; signing a 2-year, $4.5 million dollar deal. That contract quickly turned out to be a bargain. He was Mr. Reliable out of the Padres bullpen in 2018, appearing in a team-high 73 games. He accumulated an impressive 2.73 ERA and led the team with 2.3 fWAR.

Stammen will look to continue his success in 2019.

Stock’s story is a good one. He was recognized by the Reds in 2017 via a YouTube video. The right-hander put up a 2.98 ERA in 2017 with their AA affiliate and was invited to Padres camp in 2018. He took advantage of the opportunity and impressed the organization with a fastball that reached the high-90s on the radar gun. Although he did not make the team out of camp, Stock made his way up to the big league team in June and never looked back.

Robert Stock threw nearly 80 mph as a 12-year-old. He was Bryce Harper before Harper. Then baseball tested his perseverance. Today, he is a 28-year-old rookie with a goal of throwing 105: https://t.co/Q1sNaTJXVI

Castillo, a native of Venezuela, was acquired (along with Gerardo Reyes and Ryan Hanigan) in the three-team trade that also netted the Padres Wil Myers in 2014. Although it took him a little longer than Myers to appear in a big league ballgame, early returns say that the Padres have themselves a reliever that could be good for a long, long time.

After starting his 2018 season in the minors, Castillo was promoted to the big league club in June. The 23-year-old made immediate contributions. In his first career outing, he fanned Joey Votto; Eugenio Suarez; and Adam Duvall in succession. That was just the start of the success for Castillo. He wound up throwing 38 ⅓ innings in his rookie campaign. In that time, he struck out an average of more than 12 batters per nine innings and recorded a 3.29 ERA.

Castillo’s poise, confidence, and overall stuff make him a prime candidate to be the Padres’ closer in the not-too-distant future.

Loup, 31, was signed to a major-league contract by the Padres this past Sunday. He owns a career 3.49 ERA and is especially effective against left-handed hitters. In his career, he has held them to a .226/.301/.318 slash line. With Matt Strahm and Robbie Erlin expected to move to the starting rotation, Loup is slated to join Jose Castillo as the other left-handed pitcher in the bullpen.

Maton started his 2018 campaign on fire, allowing just a mere run in his first 16 innings of work. However, after pitching in an extra-inning game vs. the Cardinals in May, the Louisiana Tech product was placed on the DL with a strained lat. He missed about a month and was not nearly as effective after coming back from injury, posting a 6.32 ERA in 31 ⅓ innings.

There are some positive signs that may suggest a return to form in 2019, though. Even with the high ERA after returning, Maton still fanned nearly 11 batters per nine innings. Hitters posted an unsustainable .365 BABIP against Maton, and his FIP (3.61) was nearly three runs lower than his actual ERA.

Anthony James “Trey” Wingenter was drafted in 2015 by the Padres and slowly worked his way up the minor league ladder. He finally reached the peak at the end of 2018 and displayed plenty of potential in 19 big-league innings. His strikeout and swing-and-miss rate was phenomenal, but he will have to harness his command in order to stick. He walked 11 batters in the aforementioned 19 innings, including eight in his final 10 ⅓.

Reyes is an intriguing name to keep an eye on. Like Castillo, he was acquired by the Padres as part of the Wil Myers deal in 2014. He will turn 26 in May and has only limited experience past Double-A, but the stuff is there for him to be an effective big league pitcher. Reyes’ repertoire contains a fastball that can reach the high-90s. The right-hander recorded a 2.77 ERA in 46 appearances last season while splitting time between Lake Elsinore and San Antonio. He also pitched out of the bullpen for El Paso in the PCL playoffs.

Now on the 40-man roster, Reyes will likely make his Padres debut sometime this season.

Diaz felt some discomfort during Saturday’s bullpen session. Following further tests, it was deemed that the former Rule V selection had a torn meniscus. He is slated to have surgery and miss 6-to-8 weeks, which puts his timeline to return at about late April. Last season, the D.R. native appeared in 11 games. Although he posted a 4.82 ERA, Diaz did strike out 30 batters in 18 ⅔ innings.

Wieck made five appearances with the big league club in 2018, striking out 10 hitters in seven innings while giving up one run. The tall and lanky southpaw was expected to compete for a spot in the bullpen. However, an offseason cancer scare will push back the start of his season.

“In early January he was diagnosed with testicular cancer, said manager Andy Green. “He had the procedure to take care of it. Everything is taken care of. He has some CT scans over the next number of months. We think everything is contained. He is doing really well.”

“All of us are glad he is healthy,” he continued. “He’s the one guy in camp right now who is on a different path than expected.”