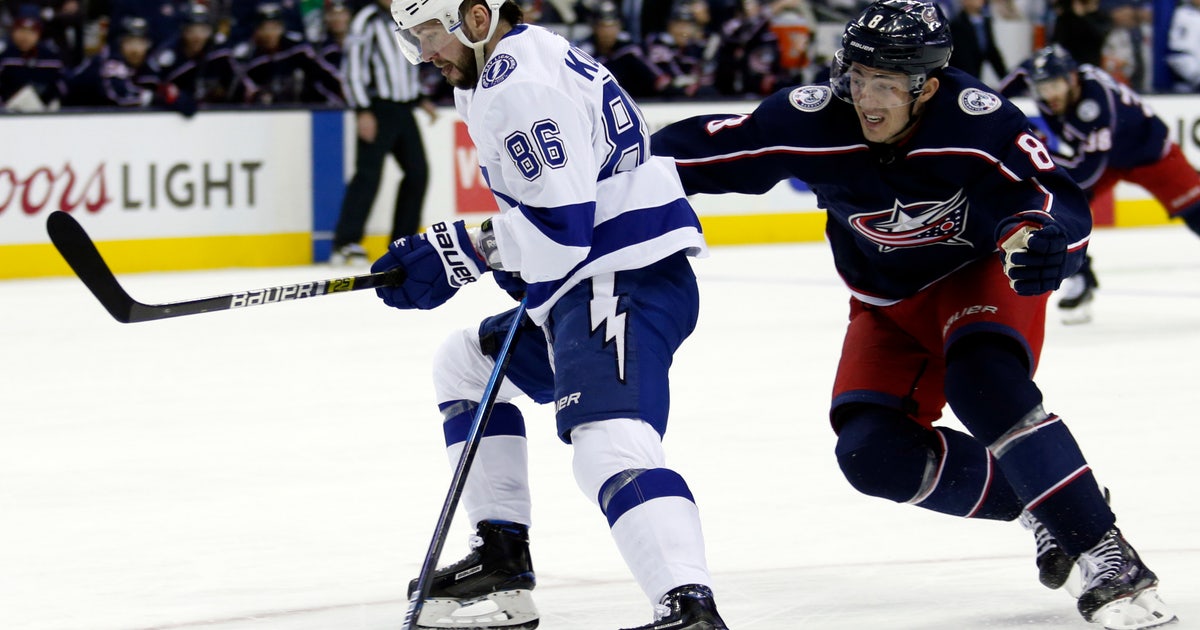 COLUMBUS, Ohio (AP) — When Nikita Kucherov is at his best, there is little opposing teams can do to stop the Tampa Bay Lightning.

Kucherov had two goals and three assists, and the Lightning beat the Columbus Blue Jackets 5-1 Monday night for their sixth straight win.

Kucherov now has 99 points to lead the league, with seven goals in the last five games.

“He’s a special player,” Tampa Bay coach Jon Cooper said. “The night when you are not your best, the team is not at its best, a big-time player came to play and our goaltender held us in. We felt pretty fortunate to come away with two points tonight.”

Brayden Point scored twice and Steven Stamkos also had a goal for the Lightning, who are 8-1-2 in their last 11 games. Andrei Vasilevskiy stopped 40 shots and got his 26th win.

Columbus outshot the Lightning 19-6 in the first period, but Kucherov scored twice. He first beat Korpisalo top shelf off a lead pass from Yanni Gourde with 8:42 left, and then nabbed a turnover in the neutral zone and slipped it through the goalie’s five-hole with 5:36 remaining for his 29th of the season.

“When he’s wheeling like that he’s a real tough player to defend,” Point said of Kucherov. “Every time he’s on the ice he makes something happen.”

Stamkos made it 3-0 with just 28.1 seconds left in the second, 4 seconds into a 5-on-3 power play when he buried his 33rd off a pass from Kucherov.

Point made it 4-0 just 12 seconds into the third on a power play from just above the circles off a feed from Kucherov. That extended Point’s point streak to five games.

Point then got his 35th only 34 seconds later just later off a pass from Kucherov.

“You can’t lose your patience. When you are down 2-0 after the way we played. You still gotta stay with it.”

NOTES: Tampa Bay has won six of its last seven games over the Blue Jackets. … Columbus’ Ryan Murray left the game after the first period with an upper-body injury. … Lightning D Victor Hedman also left after the first period with a lower-body injury. … Rookie Kole Sherwood had a strong contingent of family and friends in attendance as he made his home debut as the first Columbus-born player on the Blue Jackets’ roster.

Lightning: At Philadelphia on Tuesday night.